Vocal City Hall Rally: 'We Are Telling You We Are Opening October 1st' 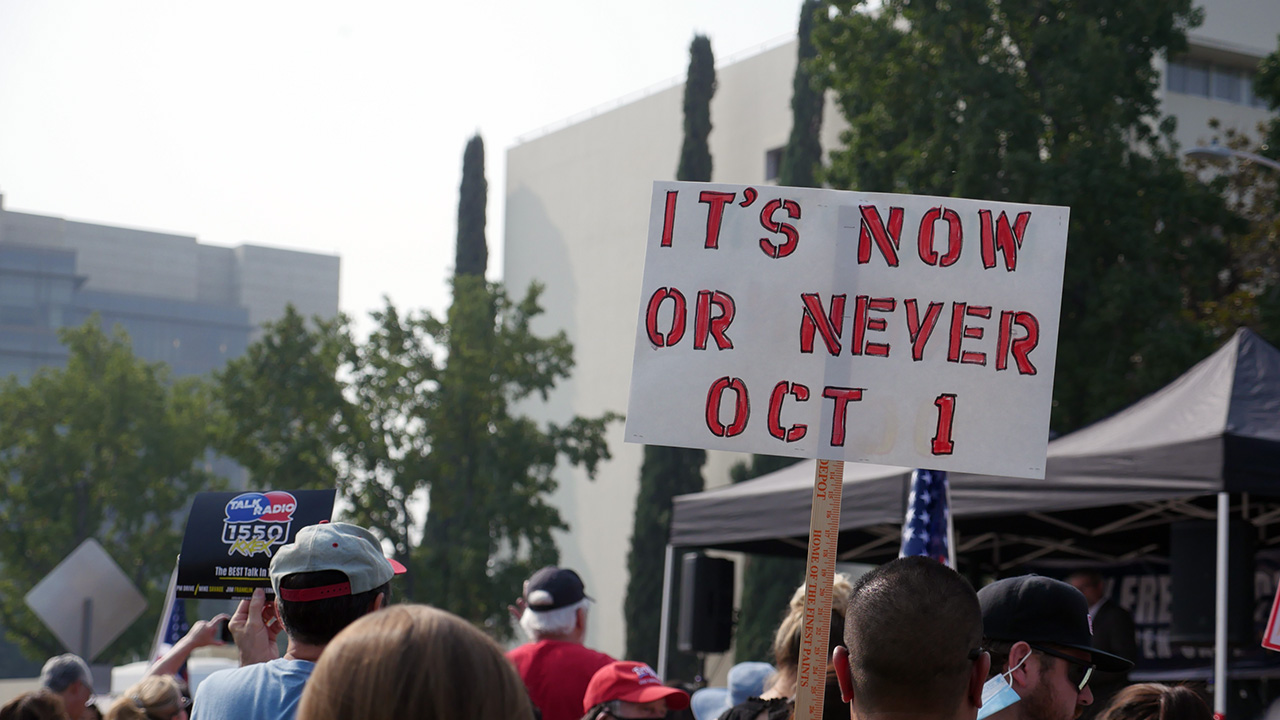 Several hundred business owners, employees and politicians gathered on Monday for a rally outside of Fresno City Hall to declare their intention to reopen on October 1.

Pastor Jim Franklin of Cornerstone Church kicked the rally off with a prayer and said he and business owners need to stand up for their constitutional rights. “We need to defend our right to make a living and worship,” said Franklin from the podium.

‘This is Only the Start’

Lewis Everk, rally organizer and creator of the Facebook group ‘Open Fresno County Safely on October 1st‘ says the demonstration wasn’t just to urge for the reopening of restaurants. “This is a movement for all our industries that have been affected,” said Everk. “This is only the start. We’re here because there is no other option. We are not asking, we are telling you we are opening on October 1st.”

Many in the crowd were not wearing face coverings, and social distancing measures were not adhered to. Several people held signs that read ‘Open our Schools’, and ‘Open Safely October 1’. A booth was set up for anyone interested in signing a petition to recall Governor Gavin Newsom.

The crowd remained peaceful throughout the several hour rally. At one point GV Wire℠ saw a few of the attendees give supportive fist pumps toward Fresno police officers monitoring the demonstration. A woman was heard shouting at Fresno City Council President Miguel Arias as he walked by. Police stepped in between Arias and the woman, who then stopped shouting. 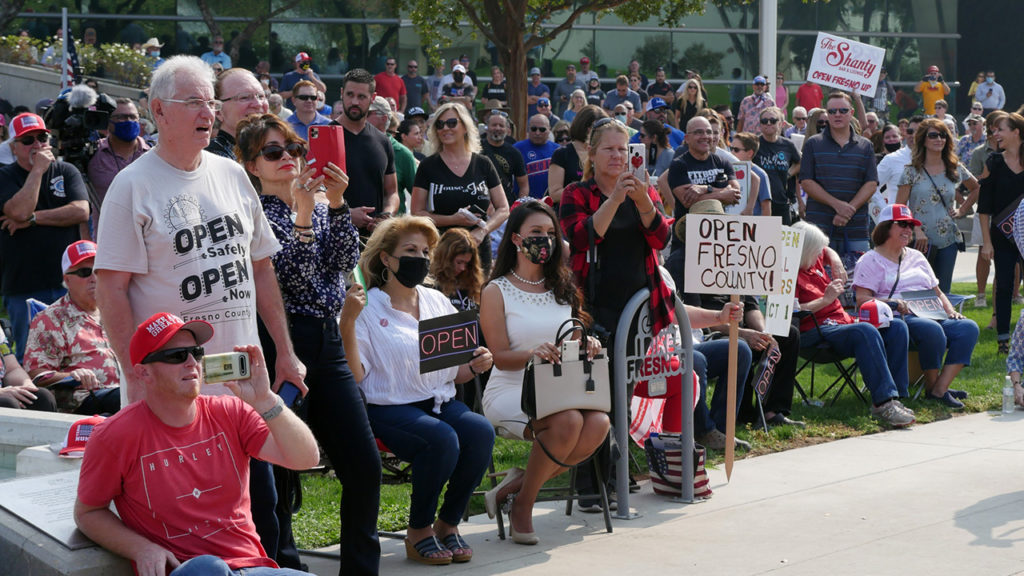 Among the speakers at the event was former San Francisco salon owner and Fresno native Erica Kious, who garnered national attention following a controversial incident involving House Speaker Nancy Pelosi in late August. Fox News Channel aired surveillance video, provided by Kious, showing Pelosi walking through her salon with wet wet and a mask around her neck rather than on her face. She had scheduled an appointment with a stylist renting space from Kious. 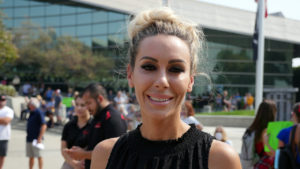 “I own a home here now, so I’m gonna stay here for a while and see how how it goes.”–Erica Kious, former San Francisco salon owner.

In her comments to the appreciative crowd, Kious mentioned the incident and said what happened was not a set up. “I’ve had those cameras in there for years,” said Kious.

Following her comments, a number of rally attendees descended on her asking for photographs and a quick chat about her experience.

Kious says she was forced to shut the salon down after receiving backlash for releasing the video. She said she’s received support from across the country, most recently by an elected representative from Placer County, who encouraged her to relocate her salon there.

But, when asked by GV Wire℠ if she was going to consider the offer, Kious said she’s staying closer to home for now.

“I own a home here now, so I’m gonna stay here for a while and see how how it goes. I do want to go around, though, and meet people and see other places and areas. But for right now, I definitely want to stay home,” says Kious.

She says she has not heard from Pelosi.

‘Forever Adored‘ salon owner Kelli Torrence said she’s been doing the best she can for her customers and her employees. She’s able to provide hair styling services indoors, but still can’t offer tattooing or permanent makeup. “My industry has been unfairly targeted,” Torrence told the crowd. 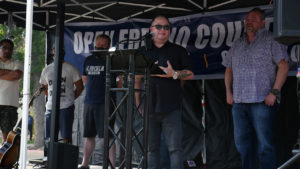 “This is only the start. We’re here because there is no other option. We are not asking, we are telling you we are opening on October 1st.”–Lewis Everk, rally organizer and creator of the Facebook group ‘Open Fresno County Safely on October 1st’

“In the next election, remember what they have done to us,” said Yosemite Falls owner Manny Perales to the crowd when his turn at the podium came up. Perales recently announced the closure of his High Sierra Grill House restaurant in northwest Fresno.

Restaurateur Dave Fansler criticized the state’s reopening plan. “Now we have this stupid color coded situation going on,” Fansler said. “He’s (Newsom) got his hand around our throat and will choke us until we’re dead. And that’s exactly what’s going on.” The owner of Pismo’s Coastal Grill joked that he’d consider buying a piece of land to erect a permanent memorial with the names of politicians he blames for keeping businesses closed.

In his comments, Fresno County Supervisor Steve Brandau reflected on attending a memorial service for Fresno County Sheriff’s Detective, Jose Mora who died in August from COVID-19. “Do it (open) in a way that respects the people we have lost,” said Brandau.

In Sacramento on Monday, Gov. Newsom announced the state’s COVID-19 positivity rate had dropped to 2.8%. Last week, the state’s tracking website also showed improvements in Fresno County’s COVID transmission rate. Local health officials say they are hopeful that updated data released on Tuesday will show Fresno County meeting metrics needed to move into the next tier of reopening in the next couple of weeks. 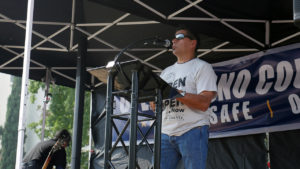 “In the next election, remember what they (politicians) have done to us.”–Yosemite Falls owner Manny Perales

Last Thursday, a majority of the Fresno City Council voted in favor of sending a letter to Newsom urging him to allow restaurants to reopen indoors “as soon as possible.”

“Restaurants have been very productive partners with you, and they need your help desperately,” said the letter from Mayor Lee Brand. “They need to be able to move back inside in a safe and immediate manner with an achievable pathway to the maximum occupancy that health and safety protocols will allow.”

Brand said he had a text conversation with the state’s public health officer after the letter was sent.

In regard to the rally, city spokesman Mark Standriff offered a comment by text message. “It’s a beautiful day to exercise your First Amendment rights. Meanwhile, Mayor Brand is exercising the power of his position to personally request relief from Governor Newsom and work with the state on real solutions.” 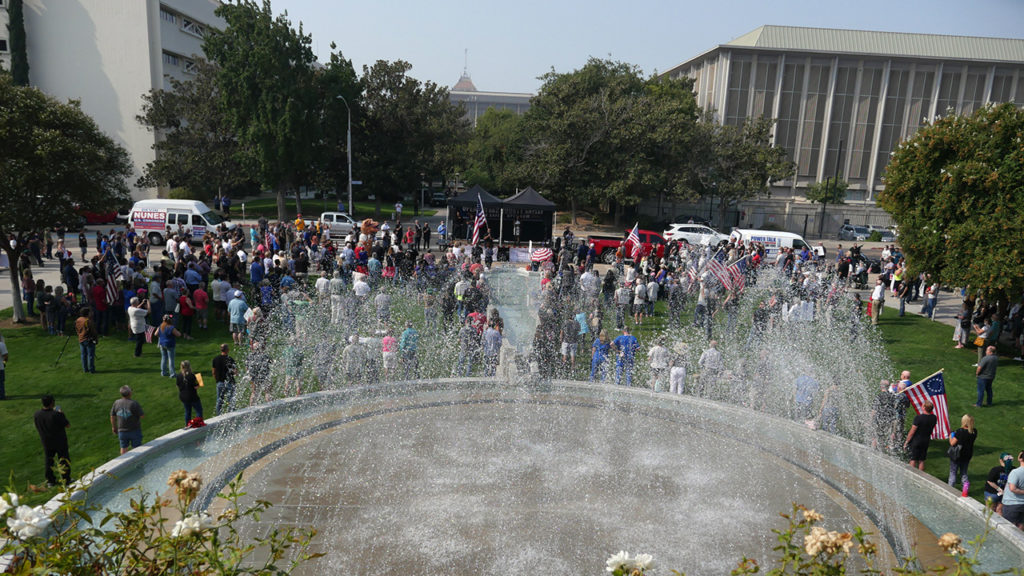