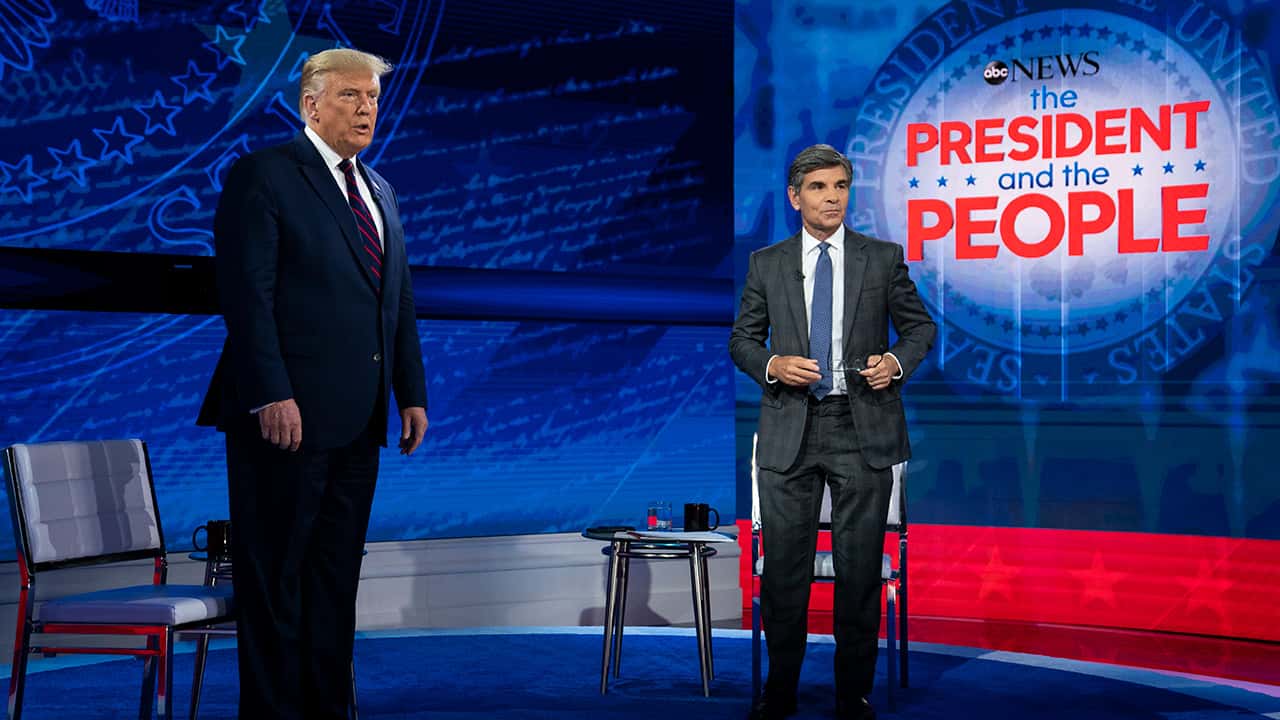 WASHINGTON — The coronavirus cannot be wished away. Real people kept it real. Preparation — and the moderator — matters.

President Donald Trump’s town hall in front of undecided Pennsylvania voters offered an intriguing preview of how he may approach his first debate against Democratic nominee Joe Biden in two weeks.

Tuesday night’s event on ABC featured predictable attack lines and vague promises of policy from Trump. But it also showcased, again, the president’s struggle to effectively defend his handling of the coronavirus pandemic that has claimed the lives of nearly 200,000 Americans.

And while the president’s aides have been eager to shift focus off the virus, the town hall made clear that the campaign, now down to its final seven weeks, has remained a referendum on the president and the pandemic.

Here are other takeaways from a night that served as a tantalizing opening act for the first general election debate on Sept. 29:

Memorably, Trump said in February that the coronavirus would disappear “like a miracle.” His tone has not changed much seven months later.

The president put himself at odds with some basic scientific facts about the virus, including being dismissive of his own Centers for Disease Control and Prevention’s strong recommendation for Americans to use face masks.

“There are people that don’t think masks are good,” Trump said, mentioning that waiters have struggled with their face coverings and did not like them.

Trump also tried to counter his admission to journalist Bob Woodward that he had tried to “play it down” when discussing the threat of COVID-19 to Americans earlier this year. Although audio recordings of his comments have been released, Trump said: “Yeah, well, I didn’t downplay it. I actually, in many ways, I up-played it, in terms of action.”

“Well, I hope there’s not a race problem,” the president said. Trump has largely eschewed formal preparation for his debates with Biden, telling aides and allies that he believes his day job sparring with journalists will suffice. And Trump backers saw much that they liked in Trump’s performance Tuesday evening, including an opportunity for the president to make a rare, if uneven, display of empathy.

But, privately, some are worried that Trump will face the same fate as many of his predecessors, who tend to grow complacent in the White House and can become flustered when they face their general-election rival for the first time.

While some have gently advised Trump to study up, the president has largely ignored their advice for now, leaving allies holding their breath for Sept. 29.

“We’re signing a health care plan within two weeks,” Trump said on July 19. It would be introduced “hopefully, prior to the end of the month,” he told reporters in early August.

No such plan has materialized, and few expect one to arrive before the election.

Trump’s unfulfilled promises came into sharp relief during the town hall as Trump insisted he had a plan – but refused to share its details or explain why he’d waited more than 3 1/2 years to unveil it.

Trump made a similar promise when it came to immigration, another issue on which he has been promising action for months without details materializing.

“So we are doing something with immigration that I think is going to be very strong because we want people to come into our country,” he said. “And in a very short time, we’re going to be announcing it. And I think it’s going to have quite an impact.” President Donald Trump speaks with reporters as he walks to Marine One on the South Lawn of the White House, Tuesday, Sept. 15, 2020, in Washington. Trump is en route to Philadelphia. (AP Photo/Alex Brandon)

The questions from self-described undecided voters were often more pointed than what the president is used to receiving.

There was a diabetic man who explained that he had to dodge people who don’t social distance or wear a mask, a prime feature of the president’s campaign events. “Why did you throw vulnerable people like me under the bus?” asked Paul Tubiana, of Bethlehem, who said he had voted for Trump in 2016.

The president sometimes began his answers before the questioners were done speaking, something Ellesia Blaque, of Wyomissing, did not allow. She asked the president how people with preexisting health conditions who work hard can stay insured. “Please stop and let me finish my question, sir,” she sternly insisted.

And Flor Cruceta Muñoz offered a question on behalf of her late mother, an immigrant from the Dominican Republic who became a U.S. citizen, asking, “What will you change to make more people, like me and like her, to become citizens and vote?

Trump, who has worked to reduce legal and illegal immigration, promised another immigration plan that he said “actually will be popular for all.” He appeared to mishear her comment that her mother died of cancer and steered the conversation to the coronavirus and the prospect of a COVID-19 vaccine.

ABC News anchor George Stephanopoulos pushed back against some of Trump’s comments but didn’t always challenge the president’s misstatements.

In answering a question about preexisting conditions, Trump said Democrats favor socialized medicine while his “strong” plan protects people with ailments they suffer before getting insurance.

“Mr. President, I have to stop you there. … No. 1, Joe Biden ran against Medicare for All in the primaries,” Stephanopoulos said.

Stephanopoulos added that the Trump administration is trying to strike down the Obama administration’s health care law, which ensured coverage for people with preexisting conditions. He pointed out that Trump said in June 2019 that his health care plan would come out in two weeks and voters still haven’t seen it.

On another pocketbook issue, Trump claimed that Biden “wants to raise everybody’s taxes.”

Stephanopoulos went to the next question without noting that Biden has said no individual with taxable income of $400,000 or less would see a federal tax increase under his plans. Less than 2% of U.S. households report that level of income.

But, facing a moderator and not an opponent, Trump was able to often set the tone for the discussion. He displayed his tendency for meandering answers that don’t directly address the subject at hand.

Despite pointed questions from voters about his record and some follow-ups about his misstatements, Trump barreled on and avoided the occasional outbursts that occur during his White House briefings.

A debate in which Trump is face-to-face with Biden and has a strict time limit will be a different challenge entirely. For the first time, Trump will be placed on equal footing with Biden, making his preferred tactic of talking past difficult questions harder to pull off.