Harris, Newsom See the Anguish of the Creek Fire Up Close 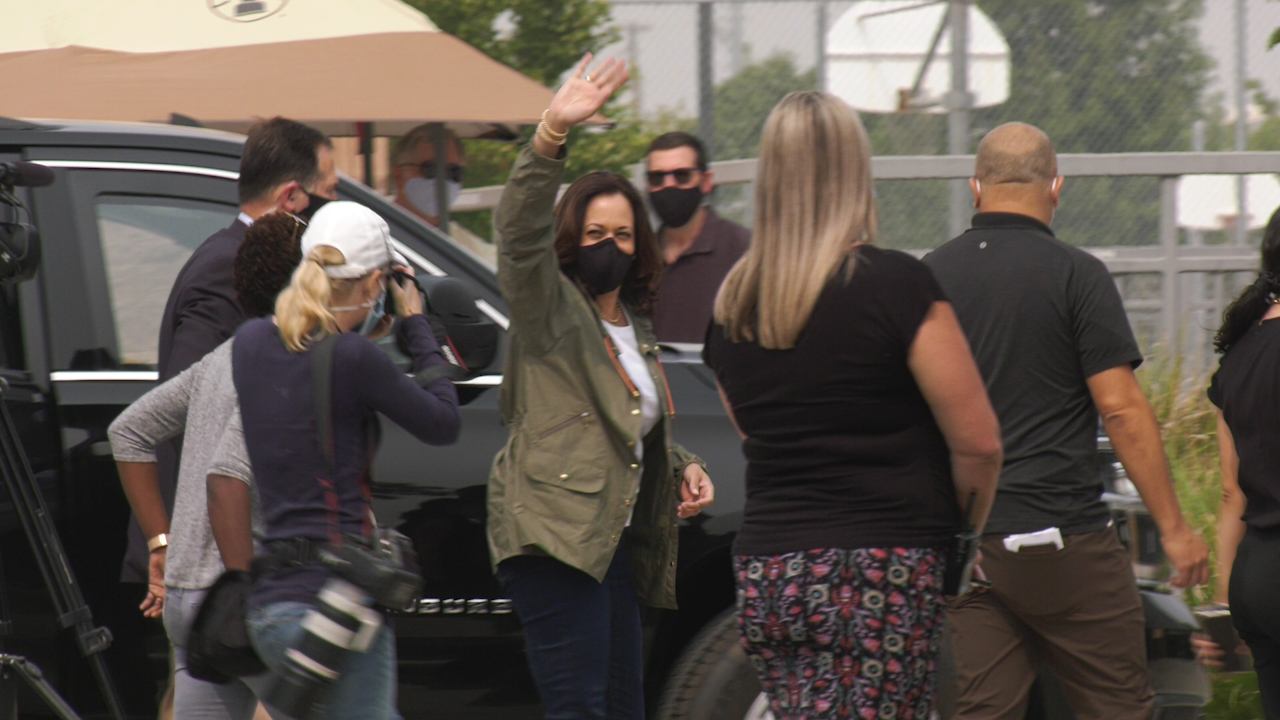 Jessica Alvarez had two reasons to evacuate. The Creek Fire was coming up toward her home in Meadow Lakes for one.

But, the unhealthy air affecting her seven-year-old daughter was the main reason she sought refuge with the Red Cross at their temporary evacuation point at the Granite Ridge Middle School gym on the campus of Clovis North High School.

“We’re in a very tricky situation. Yes, we evacuated. Our home is on the fire line currently. So technically, our home still stands. But our daughter, Aliya, is very medically complex,” her mom said.

While there, Alvarez and her three girls had a chance to meet with Kamala Harris, the California Democratic senator running for vice president, and Gov. Gavin Newsom.

Harris and Newsom told those at the Red Cross center that they will support them. Alvarez plans to hold them to that.

“I hope that seeing families’ faces is a better connection for them than (seeing) a burned forest,” Alvarez said. The stop at the Red Cross location was the second of three during a visit evaluating the Creek Fire’s widespread damage.

Harris and Newsom were briefed on the Creek Fire on Tuesday morning at Pine Ridge Elementary School in Auberry.

Ash fell like snowflakes as Harris and Newsom got a closer look at a damaged playground.

After the briefing, Harris and Newsom crossed Auberry Road and examined a burned-out residence.

“Sadly, these wildfires and the devastation they cause are utterly predictable,” Harris said. “Especially in residential areas, and you’ll see where the fire has just swept through. Everything is gone except the chimney. … Those chimneys remind me of tombstones.”

Harris added that “this is not a partisan issue. … We have to do better as a country.” “We have to understand that California, like so many other parts of our country, has experienced extreme weather conditions,” Harris said. “It is incumbent on us, in terms of the leadership of our nation, to take seriously these new changes in our climate, and to do what we can to mitigate against the damage.”

Magsig, speaking with reporters, called for better management and logging, which would create jobs, too.

Before heading back to the airport, Newsom and Harris capped off their four-hour tour at Fresno Fire Station 11, at Fresno Street near Barstow Avenue.

Harris and Newsom delivered sack lunches to firefighters in the station bay and chatted for several minutes.

At all three stops, dozens of Trump supporters lined the streets, waving signs and chanting.

Security was visible at all three locations. With a roadblock at the Prather roundabout on Highway 168, supporters were miles away from Pine Ridge Elementary School.

A collaboration of CHP, Secret Service, and Clovis Unified police kept supporters, certain media, and onlookers at a distance at Clovis North.

Family Counting on Leaders for Help

For Alvarez, finding a home for her children beyond the temporary hotel is more on her mind than politics or who she’ll vote for in the election. She is counting on government help.

“We’re hoping that the government can step in and really be a support to (those affected). Our mountain community is … like nowhere else in the entire world. Everybody’s family. When one person is hurting, everybody hurts,” Alvarez said.

For her 12-year-old daughter, Alicia, she thought it was cool to meet someone who could be vice-president. She was also proud of her mom.

“It’s also nice that my mom gets to speak for the mountain. I’m really happy about that. People get to hear from somebody who lives in the community,” she said.

Is Biomass One of the Answers to California Wildfires? UC Researcher Says Yes