WARREN, Mich. — Joe Biden traveled to suburban Detroit on Wednesday to make a direct appeal to blue-collar workers who might have voted Republican four years ago but now regret it — attempting to rebuild the once fabled Democratic “blue wall” that crumbled and helped catapult Donald Trump to the White House.

The former vice president’s first coronavirus-era campaign trips beyond his home in Delaware have been to Pennsylvania, Wisconsin and Michigan, an indication of how closely Biden’s electoral prospects are tied to winning back those formerly reliably Democratic states.

Biden pledged to rewrite tax codes to reward U.S. companies that invest in domestic manufacturing while imposing penalties on those that send jobs to other countries. He spoke outside a United Auto Workers regional office in Warren, flanked by an array of U.S.-made cars including Fords, Jeeps and Chevrolets.

“I’m not looking to punish American businesses but there’s a better way,” Biden said. “Make it in Michigan. Make it in America. Invest in the communities and the workers in places like Warren.”

He noted that a local General Motors transmission plant closed last year despite Trump’s pledges to protect Michigan jobs, adding, “I bet the workers around here weren’t all that comforted by Trump’s empty promises.”

“Under Donald Trump, Michigan lost auto jobs even before COVID hit,” Biden said. “And what about offshoring? Has Trump delivered on stopping companies from shipping American jobs overseas? You already know the answer to that. Of course not.”

Last week, Biden went to Wisconsin and was followed quickly by running mate Kamala Harris, who held Labor Day events there. Biden hit Pennsylvania during the holiday and will be back on Friday.

Trump is countering with his own trip to Michigan on Thursday and also will be in Pennsylvania himself the following day.

Though the Biden campaign often emphasizes that it sees multiple ways to secure the 270 Electoral College votes it needs to win in November, the quickest path runs through Michigan, Pennsylvania and Wisconsin. 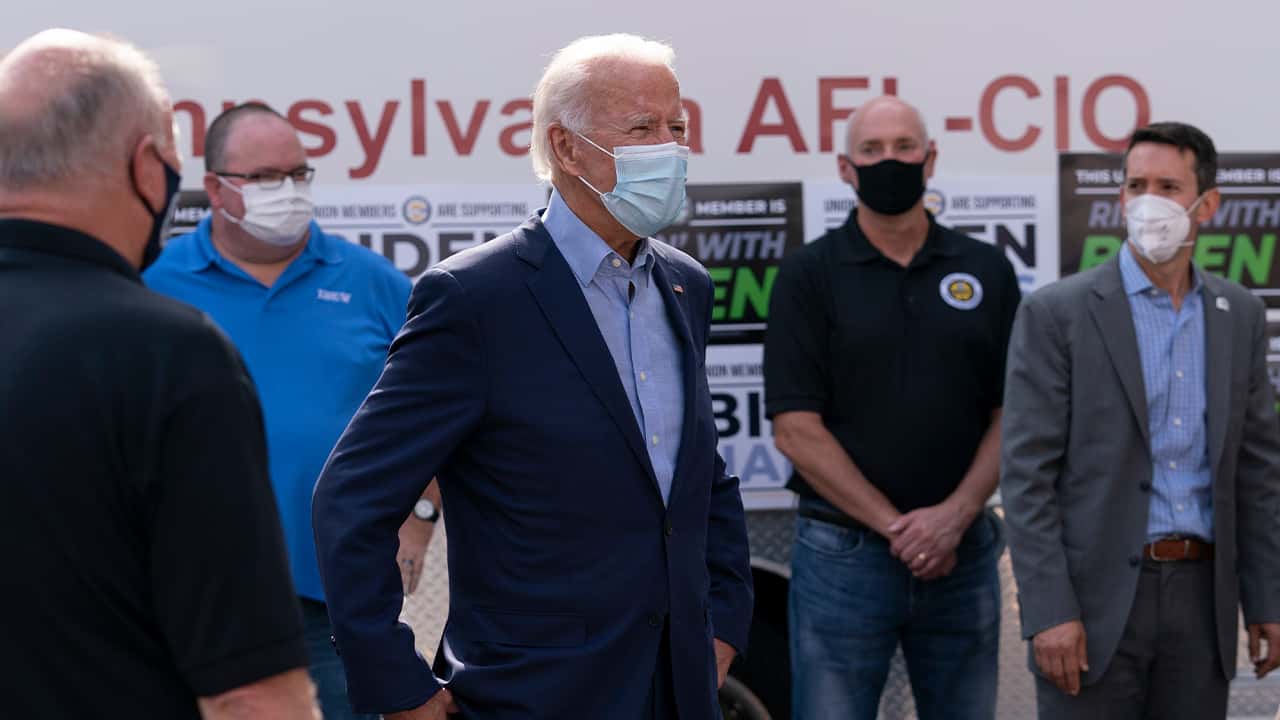 “If Biden wins any of them — but particularly any two, with some of the other states that are in play — it’s pretty impossible for Trump to win the Electoral College,” said veteran Democratic strategist Joe Trippi.

Biden’s aides believe his focus on the economy and Trump’s handling of the coronavirus will resonate with key voters nationwide but particularly in states like Michigan, which took one of the sharpest hits nationally from the pandemic.

The state’s unemployment rate spiked at 24% in April, according to the Bureau of Labor Statistics. It has since recovered to 8.7%, but Michigan has nearly 414,500 fewer jobs than it did when Trump was inaugurated.

Previewing the president’s own Michigan trip, the Trump campaign looked to paint Biden as deferential on China. Trump’s allies have long credited his hawkish stance toward Beijing in 2016 as helping him win the industrial Midwest, which suffered job losses overseas that Trump blamed on Obama-era trade policies.

Trump aides have frequently repeated claims about Biden’s ties to China, but that’s proven problematic in light of Trump’s own kind words for that country earlier this year at the start of the pandemic. They also have also ignored the Obama-Biden administration’s efforts to save the American automotive industry, based in Michigan, after 2008’s recession.

“Joe Biden is going to the state of Michigan to pretend to be a friend and ally to workers in the industrial heartland,” said Steve Cortes, Trump campaign senior adviser, “but he has proven over and over that he is a globalist and a corporatist who, as senator from Delaware, well represented corporate interests over American workers.”

Biden, by contrast, stressed the Obama White House’s efforts to revive the auto industry 12 years ago and said Wednesday that Trump has “failed our economy and our country.” He also promised to create a “Made in America” office within the White House Office of Management and Budget to ensure government projects use resources made domestically.

The Biden Campaign Is Heavily Outspending the Trump Campaign

Trump supporters maintain that the president fulfilled his job creation promises and was only temporarily sidetracked by the pandemic. But hiring at factories across the Midwest — including in Michigan, Ohio and Wisconsin — actually began to stall and then decline in the summer of 2019.

Trump won Michigan by the narrowest margin of any state in 2016 — fewer than 11,000 votes — and Democrats made huge gains there in the midterms, winning every major statewide office and a handful of congressional seats as well.

Indeed, Democrats see reasons for optimism in the party’s gains during the 2018 midterms in all three states, which were powered in part by an exodus of suburban women from the GOP. And they believe that a stronger emphasis on minority turnout — with Harris, the first African-American woman on a major ticket, focused heavily on Black voters in key states — will help Biden make up some of the ground Clinton lost in 2016.

“The campaign’s taking it more seriously from the start than national Democrats did four years ago,” said Amy Chapman, who worked as Barack Obama’s Michigan state director in 2008. “They started doing advertising earlier than they did last cycle — last cycle they were only up at the very end — and the ads show what Biden would do, as well as showing a contrast with Trump.”

The Biden campaign is heavily outspending the Trump campaign on-air in all three states. Since Biden became the presumptive Democratic nominee in early April, his campaign has spent about $59.8 million to the Trump campaign’s nearly $26.8 million across the states, according to the ad tracking firm Kantar/CMAG. The difference is starkest in Michigan, where the Biden campaign has spent $17.2 million to Trump’s $6.7 million.

For future spending, however, the two come about even, with Biden reserving $33.5 million on air and Trump reserving $32.7 million across all three states.

Trump and Biden will both be in Pennsylvania on Friday at a Sept. 11 memorial in Shanksville, the site of the 2001 crash of United Flight 93.