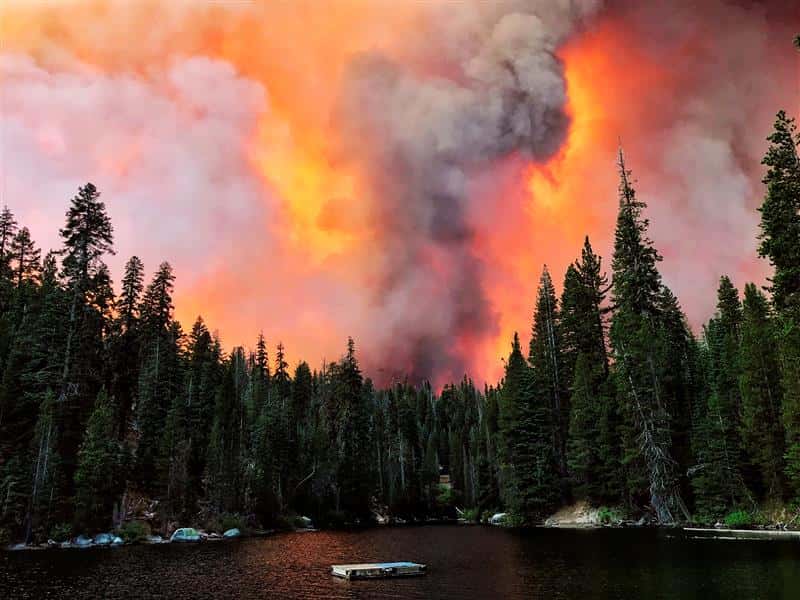 The Creek Fire has claimed “many cabins” in the Huckleberry tract, Huntington Lake Volunteer Fire Department Chief Chris Donnelly said Tuesday in a 4:30 p.m. email update to residents there.

“An exact count and which ones were consumed is not available at this time,” Donnelly said. “From our initial report, it appears that the cabins closer to the lake received the most damage. There is little on the cabins closer to (Huntington Lake) Road in Jeffery Pine and Old Tank road.” The remains of a cabin in Huntington Lake’s Upper Line Creek tract destroyed by the Creek Fire. (Special to GV Wire)

However, firefighters have managed to save cabins in the Dowville area on Saturday night despite being hit hard by flames and hit, Donnelly said.

“Fire crews did an excellent job of preparing structures and the new hydrants and significant water storage Dowville has installed helped to make that stand a success,” Donnelly said.

Still, five cabins in that area were burned.

“Our prayers and good wishes go out to them,” Donnelly said.

On Sunday, crews moved into the Home Creek and Idywilde tracts to prep those cabins. Assistant Fire Chief Brad Driscoll reported that through Tuesday afternoon there were no losses there.

But the fire moved through the forest between Billy Creek and Camp Silver Fir, “decimating the area,” Driscoll told Donnelly.

Still, much is unknown about the extent of damage around Huntington Lake.

“Access to Camp Silver, Upper Line, and Lower Line Creek tracts on the north side was not possible at this time due to downed snags,” Donnelly said. “No survey was done in Upper Bear extension, Line Creek tract or Bear Creek.

“However, the cabins on the S-curves (on Huntington Lake Road) seem to have not yet been damaged. There has been little fire activity east of the curves and the hand crews have been able to keep up with the spot fires.”

“All of these units are working together to aggressively extinguish spot fires and dozers are working hard to push a fire break as wide as possible on the ride behind the cabins,” Donnelly said. “Predictions are for significant winds to increase on the fire line. Additional fire crews will not be available until (Wednesday) at the earliest.” A fire engine races across the back dam at Huntington Lake on Sunday. (Facebook/Clovis Fire Department)