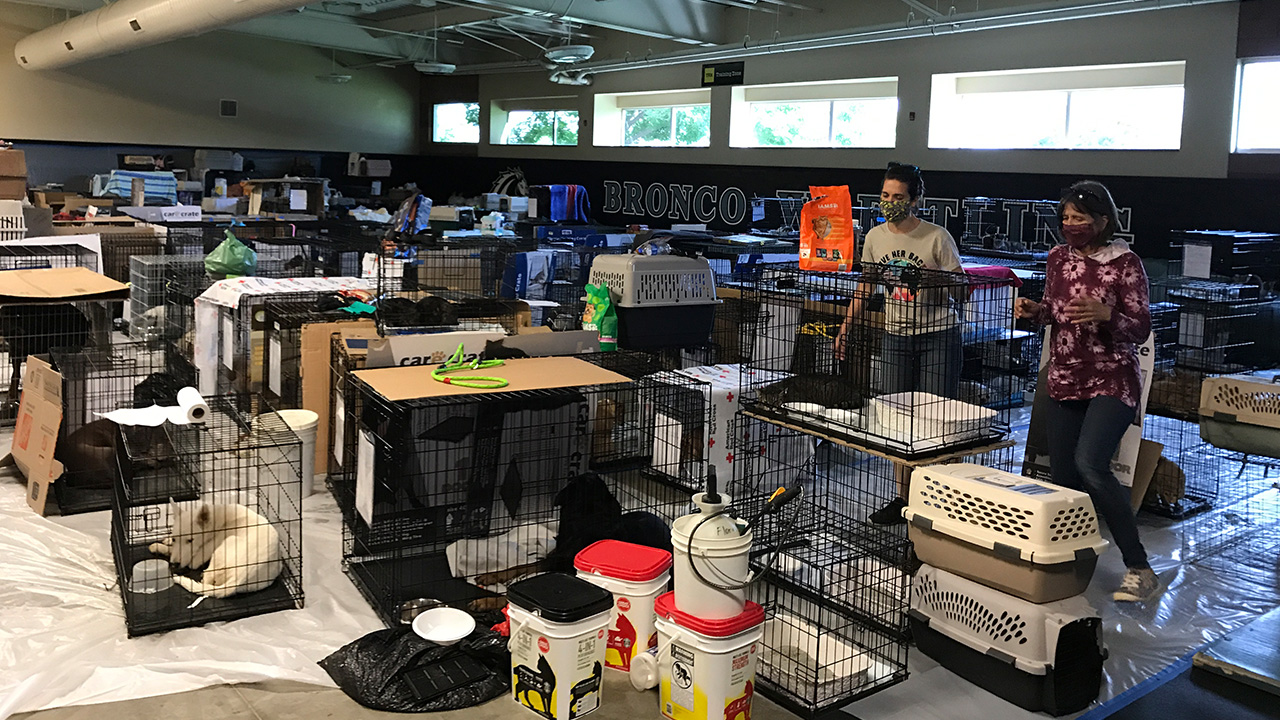 Margo Ortiz was a little worried about the lack of shade for her three American Paint horses who were wandering around a corral Tuesday at the Clovis Rodeo Grounds. 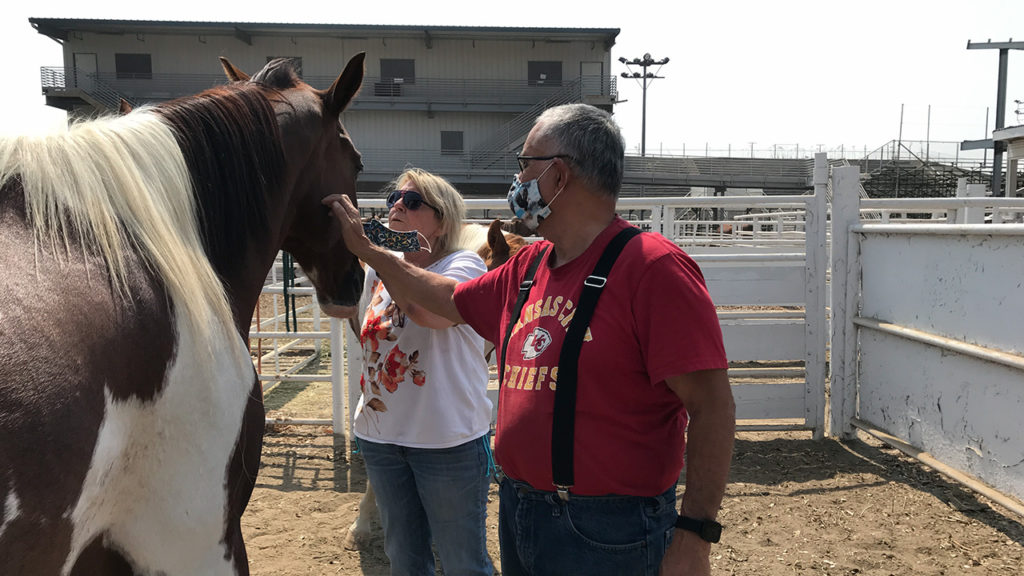 But she was also extremely grateful that she and her husband Chris had a safe place to bring the horses when the Creek Fire advanced toward their Pine Ridge neighborhood southwest of Shaver Lake.

Left behind were the chickens and ducks, and the retirement home they moved into only two years ago.

When the horses spotted Ortiz entering the corral they walked over, hopeful that she might have treats. “I’m sorry, I didn’t bring anything,” she said apologetically while rubbing their soft noses.

As of Tuesday morning, the Clovis Rodeo Grounds was the temporary home for dozens of horses, cows, donkeys, and other critters whose owners brought them to the Valley to escape the wildfire roaring through the Sierra.

Shelter manager Leslie Harris with the Central California Animal Disaster Team said the site was well-fixed for supplies such as hay and for volunteers to muck out stalls and feed the animals.

Donations are what’s needed now to help fund the care of animals at various sites in Fresno and Madera counties, Harris said. They can be made at the CCADT website, she said.

Margo and Chris Ortiz may have been among the luckier ones — at least they know where their animals are. Tuesday afternoon, Anna Hamre of Auberry was still trying to learn the whereabouts of her three donkeys who were picked up by animal rescuers early Monday.

Hamre, professor emeritus at Fresno State and artistic director/conductor for the Fresno Community Chorus/Master Chorale, had reached out at 5 a.m. Monday when it became clear she and her partner Roxie Bates would need to leave their home of nearly 20 years.

The chickens were already in good hands — a chorale friend had referred Hamre to a woman she knew who had room for the chickens. The woman actually drove up to Auberry, helped her crate the birds and then headed back to the Valley, Hamre said.

Meanwhile, Hamre and Bates were promised a temporary home at a friend’s guest house in Sanger.

But she was worried about moving the donkeys, who are from the desert and somewhat wild, and especially Blanca, who is older and ailing. Hamre said she feared Blanca might have to be left behind, but “at the last moment she took a step up the ramp.” 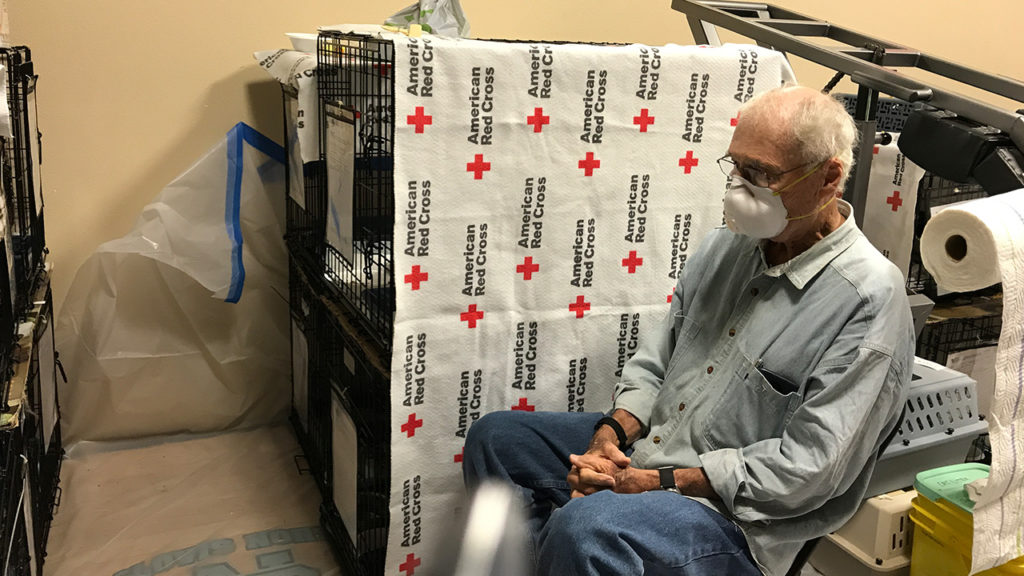 Gary Temple sits next to the cages holding his 15 cats in the shelter at Granite Ridge Intermediate School on Tuesday. (GV Wire/Nancy Price)

Over at Granite Ridge Intermediate School in northeast Fresno, Gary and Carolyn Temple of Auberry had come to visit their 15 cats who range in age from 1 to 19 years. Their donkey wound up at a horse ranch in Clovis.

The Temples, who are staying in a Fresno motel, are making three daily trips to see the cats, some of whom require medication for illnesses.

But in the meantime, they’re worried about whether their house has been spared by the Creek Fire. “I called the answering machine this morning and it picked up, so I figure that’s a good sign,” Gary Temple said. “But we’re just above the town of Auberry.”

Jeannie Sa, the CCADT shelter manager at Granite Ridge, said she couldn’t count the number of dogs and cats that had already arrived, with more on the way. The personal pets included a garter snake, she said.

The sounds of barking dogs filled the wrestling room, where crates and cages were atop plastic sheeting taped to the floor to protect it from the inevitable pee and poop. 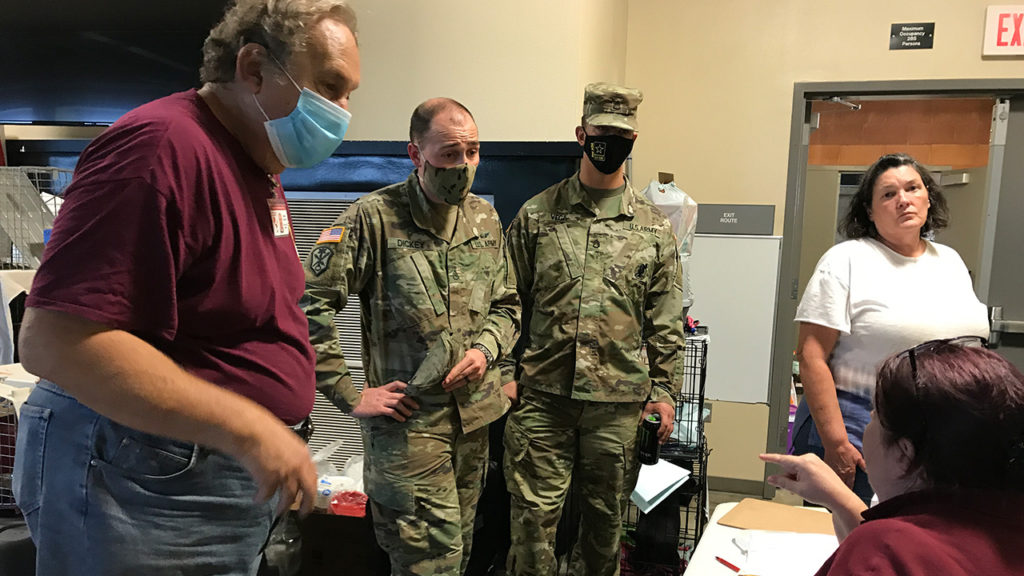 The school had opened up the weight room next door, so volunteers who include two California National Guardsmen were moving crates containing cats into their own room.

The geese and chickens also might be heading to a new home, Sa said: “We’re currently working with the Fresno Fairgrounds to take the poultry.”

The Fresno Fairgrounds is set up to receive evacuated animals, but please contact the Central Ca Animal Disaster Team at 888-402-2238 or the @FresnoSheriff Office at 559-600-3111 to finalize arrangements so you can be received at our Fairgrounds! #creekfire2020

But she expects that the fire crisis will continue, and volunteers will be needed “24/7” for animal care, so potential volunteers should watch the team’s Facebook page and other social media for volunteer opportunities.

One of the best ways to help? “If they know of anyone in need of shelter, make space for them.”