'It Looks Like Mars Out There': Creek Fire Threatens Shaver Lake 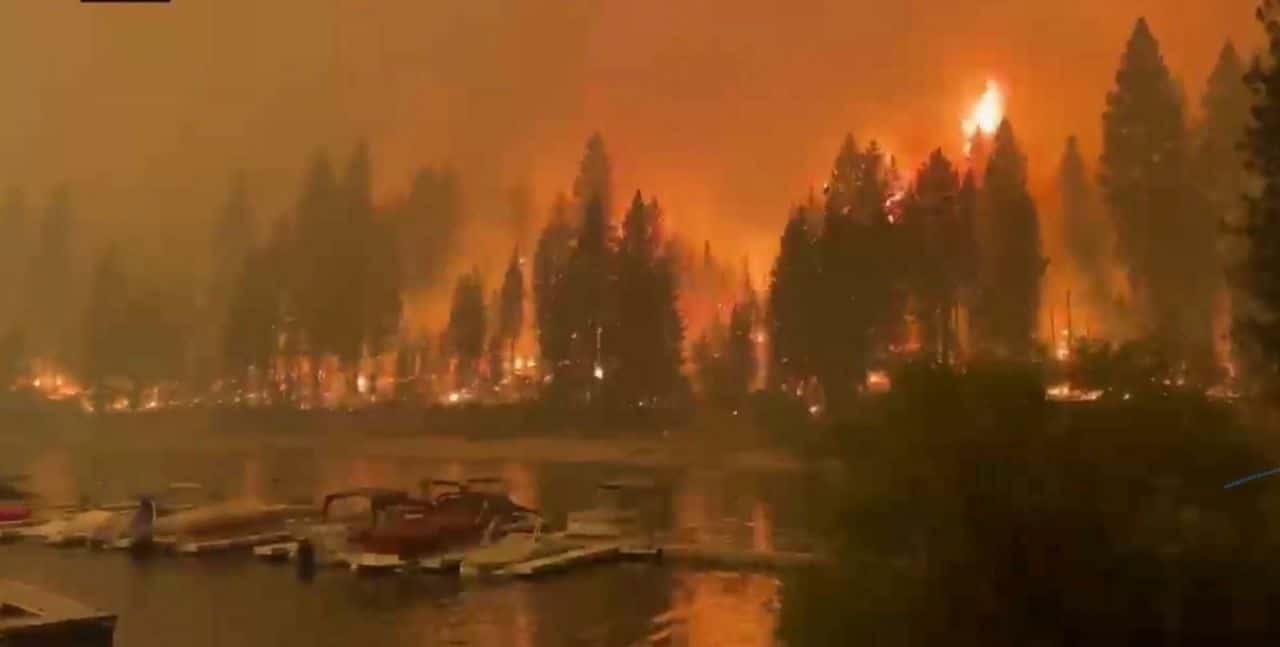 The Creek Fire moved aggressively toward Shaver Lake on Sunday afternoon, threatening stores and cabins throughout the Sierra hamlet about 50 miles northeast of Fresno.

A photo sent to GV Wire℠ by a person on the scene showed the fire next to businesses at “The Point” adjacent to the lake. Another photo showed flames ripping along the shoreline behind a marina.

Firefighters assigned to the Creek Fire are battling high temperatures and lightning strikes.

We have dropped off another load of supplies to firefighters and first responders and evacuees. Thankful my community friend Brian Bobbitt has helped me pack up his truck! #CreekFire pic.twitter.com/CCLQgbhksb

By Sunday afternoon, smoke had blocked the sun and fire threatened a marina and cabins along Shaver Lake.

Jack Machado helped friends remove propane tanks from the lodge Cottages at The Point. Sheriff’s deputies went through the town to ensure that residents complied with evacuation orders.

“The lake is totally engulfed with smoke. You can’t hardly see in front of you,” Machado said. “The sky’s turning red. It looks like Mars out there.”

The wildfire, named the Creek Fire, started Friday and by Saturday afternoon exploded in size, jumped the San Joaquin River and cut off the only road into the Mammoth Pool Campground, national forest spokesman Dan Tune said.

The Creek Fire grew to 45,500 acres from Saturday night to Sunday morning. Some observers said that as of Sunday afternoon it had grown considerably bigger than that.

Gov. Gavin Newsom on Sunday issued an emergency proclamation for the counties of Fresno, Madera, and Mariposa because of the Creek Fire.

The governor’s office announced that it secured a Presidential Major Disaster Declaration to bolster the state’s emergency response to the Northern California wildfires.

The massive and rapid growth of the fire prompted UCLA climate researcher Daniel Swain to consider whether a fire tornado was to blame.

“#CreekFire has exploded in size & intensity at a time when 1000s of visitors have crowded area,” Swain posted on Twitter. “Massive pyrocumulus cloud indicative of extreme fire behavior, & #pyrotornado may have occurred.”

Atmospheric aerosol/stratospheric folks: this extremely vigorous and tall #pyrocumulus plume atop the #CreekFire looks like a good candidate for stratospheric smoke injection. This has been observed for a number of recent intense fires in Australia & boreal forest region… https://t.co/J6zgmRF4qv

The Creek Fire’s origin was about 7 miles northeast of Shaver Lake. It is believed to have started at around 6:45 p.m. Friday. The cause is under investigation, Cal Fire officials said. Map showing areas of heat in the vicinity of the Creek Fire as detected by satellites over the past 24 hour.. (WildfireIncidents.com) Smoke from the Creek Fire billows beyond a ridge as seen from Huntington Lake on Saturday, Sept. 5, 2020, at Huntington Lake, Calif. (Eric Paul Zamora/The Fresno Bee via AP)(Associated Press contributed to this article.)