Parents who want their kids back in school took to a busy northwest Fresno street corner Thursday afternoon to protest their lack of choice over the ongoing school closures in Fresno County.

About 100 moms and dads, grandparents, and kids wielded homemade signs with slogans such as “Teachers are Essential” and “I Miss My Friends” and cheered when drivers of passing vehicles honked. 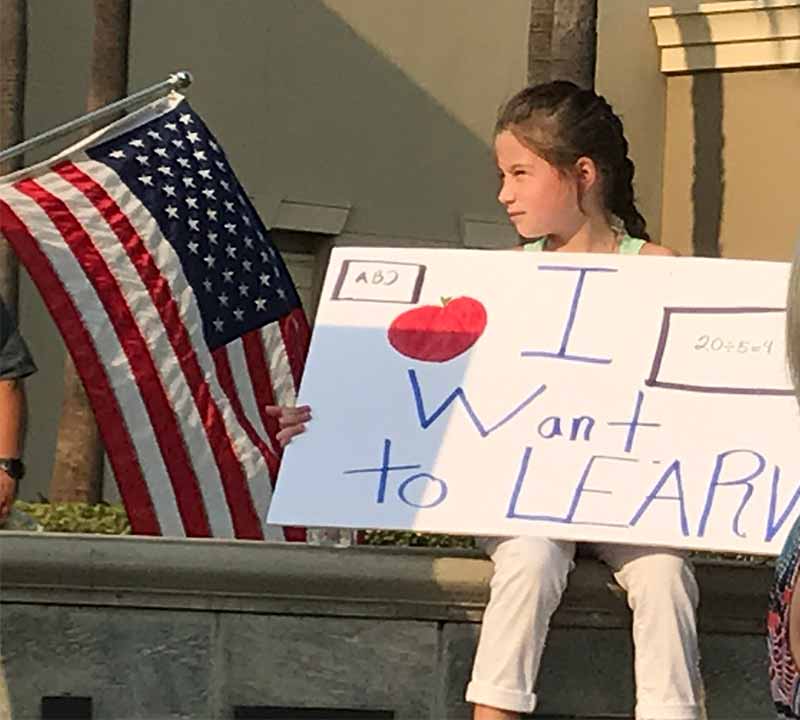 A young protester holds a sign at a Thursday rally calling for the reopening of schools. (GV Wire/Nancy Price)

But there also was a political tinge to the gathering, with volunteers collecting signatures for a recall election of Gov. Gavin Newsom, whose orders to keep schools and businesses shuttered to stem the spread of COVID-19 have angered many.

The protesters included a contingent of parents wearing bright blue Immanuel Schools of Reedley T-shirts. Immanuel Schools reopened its doors to in-person instruction last month in violation of the state-mandated schools closure for Fresno County schools because of high rates of coronavirus infections.

After school officials defied an order by the Fresno County health department to close, the county sought a restraining order in Superior Court. But a judge said the county provided insufficient evidence about the potential harm of keeping the schools open.

Meanwhile, Immanuel Schools is part of a lawsuit filed in the California Supreme Court, seeking to have Newsom’s closure order overturned.

The rally was organized by the creators of two Facebook groups, Fed Up Parents of FUSD and Open the Schools California. Jason Peters, a Bullard area parent who founded the Fed Up Parents group, said the protest gives parents the opportunity to speak out.

“We’re just frustrated, we want our kids back in school. This is not easy for parents or kids,” he said as passing vehicles honked in support. “It’s frustrating, it’s maddening, it’s creating tension in the home, it’s creating loneliness and anxiety and all those other things. We should have a choice.”

His wife Catherine told GV Wire℠ on Tuesday that Fresno Unified parents are disappointed that district leaders such as superintendent Bob Nelson aren’t doing more to advocate for the reopening of schools. She said she emailed an invitation to Nelson to come to the rally and meet with parents, but as of Thursday morning had gotten “zero acknowledgement.”

Thursday afternoon, district spokeswoman Nikki Henry sent a statement by email to GV Wire℠ that said the district agrees with parents that kids need to get back into the classroom, but only when it’s safe to do so: “We know that on-campus instruction is the ideal and best learning environment for our students. We are committed to getting our students back into the classroom as soon as we can, taking into account the guidelines from the state and our local health experts.”