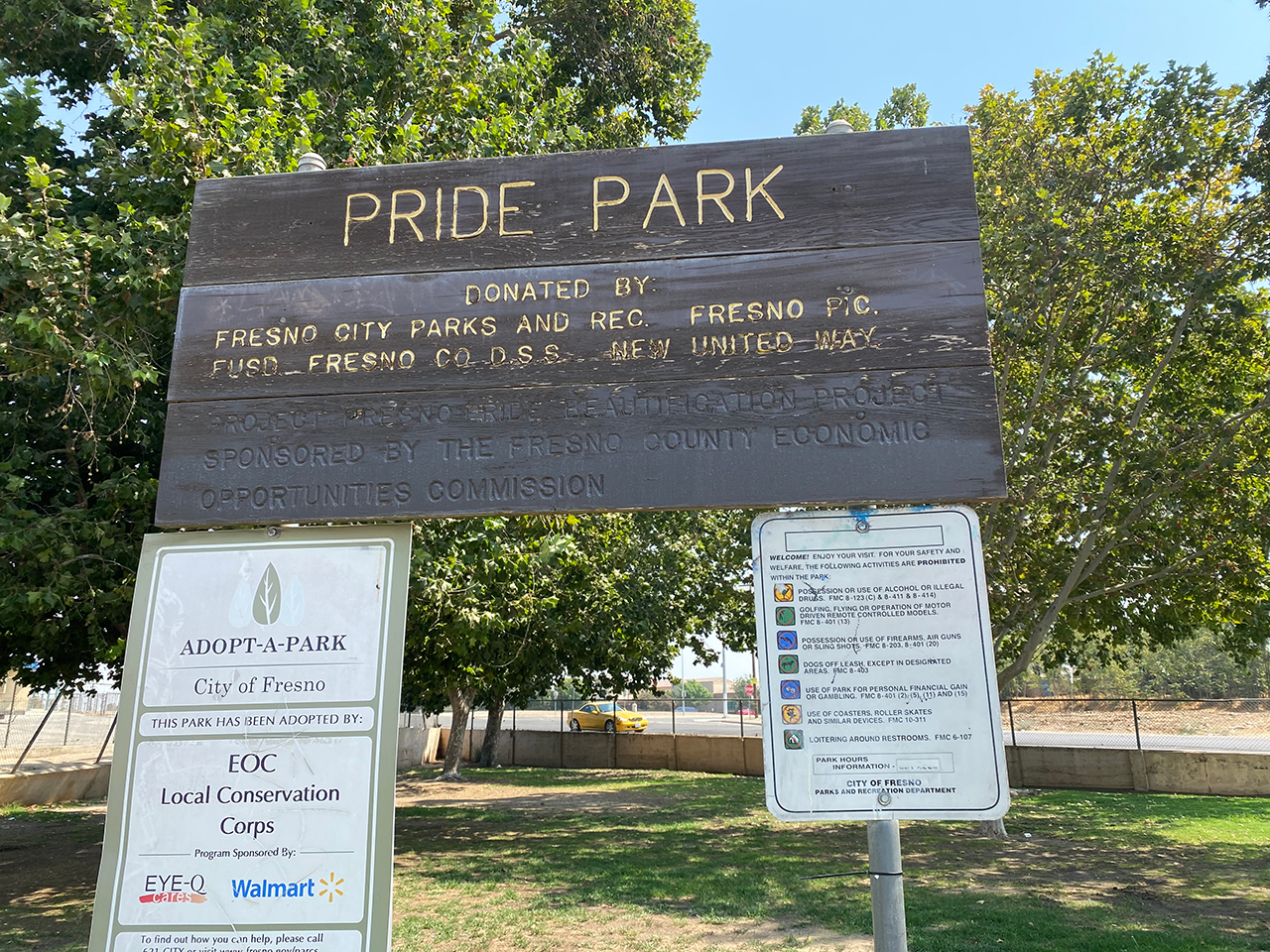 Update, 8/27/2020: the Fresno City Council tabled this item until the Sept. 17 meeting. Here is the original story:

Ted and Deborah White don’t care about Pride Park’s sagging walls or diminishing amenities. Its shady trees offer an escape from the heat on a typical Fresno summer day.

“We enjoy it very much. We come out here a lot. It’s better than sitting in the hot house,” Deborah White said.

There is not much to Pride Park, other than a sign and about a half-dozen trees. Its grass is spare, and the retaining wall separating the park from an adjacent parking lot is slanted.

“It’s all that we have here in the west side. We don’t have a lot of places to go,” Ted White said.

Soon, not even Pride Park may be an option.

The Fresno City Council will vote on selling the park at tomorrow’s meeting. The buyer is the non-profit Fresno Economic Opportunities Commission, which will incorporate it to its Head Start campus next door.

“Our kids need green space with all the amenities that allow them to remain safe and healthy. This patch of grass called a park was never going to be that given its size and location on a traffic intersection.” —Miguel Arias, Fresno City Council president

Complying with the Surplus Land Act which took effect this year, the city declared Pride Park excess property in March by a 7-0 council vote.

The land is in Council President Miguel Arias’ district. He said it’s not enough space for a real park, and the community supports its sale to Fresno EOC.

“Our kids need green space with all the amenities that allow them to remain safe and healthy. This patch of grass called a park was never going to be that given its size and location on a traffic intersection,” Arias said.

Arias has doubt that the park, a remnant from a decades old road expansion project, should have ever been built.

“This historic wrong will finally be corrected by giving our children a larger Head Start campus and west Fresno a new full scale 10 acre park it deserves. We will continue improving the Edison High education corridor by addressing the saturation of liquor stores as well. Our kids and residents deserve nothing less,” Arias said.

A new park, on Reverend Chester Riggins Avenue near St. Rest Baptist Church, will be paid for as part of $70 million the city received from the state’s Transformative Climate Communities Program, funded by carbon cap-and-trade dollars. Sale to Fresno EOC for $1

The park sits on less than a half-acre — a triangle at the corner of California Avenue and Fresno Street. According to a city staff report, the park has a market value of $70,000. Fresno EOC will purchase Pride Park “as-is” for $1. As part of the agreement, Fresno EOC must use the park for its educational services program.

“As a condition of the sale there will be a covenant recorded that requires the Buyer to use the property in conjunction with their program and if the Buyer no longer has a use for the property as part of the Buyer’s program, the City of Fresno will have the First Right of Refusal to buy the property back for one dollar,” the report says.

Fresno EOC says the public will no longer have access to the park, which is located near Edison High School and Computech Middle School..

Keshia Thomas, the president of the Fresno Unified school board, said the park has been a problem for a long time.

“Pride Park has actually been an eyesore for west Fresno for a long time,” Thomas said. “One of my biggest concerns is making sure that there is a safe passage from school to home for some of my kids.”