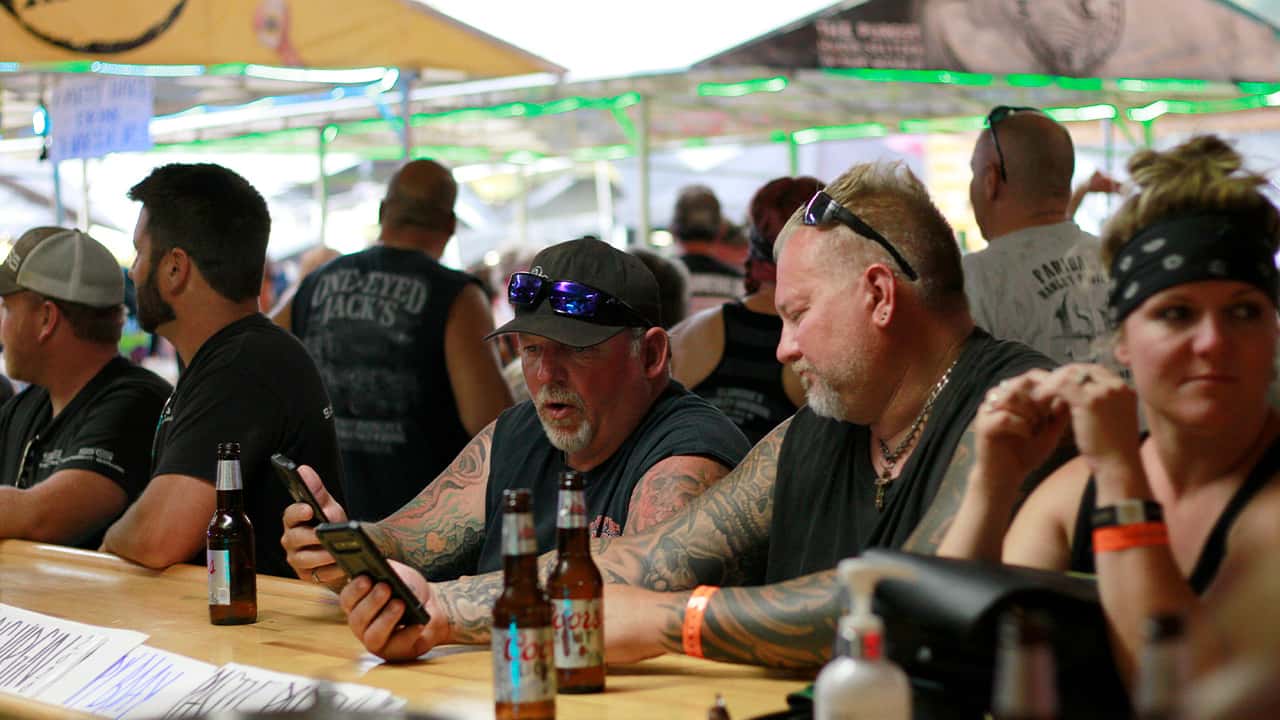 SIOUX FALLS, S.D. — The hundreds of thousands of bikers who attended the Sturgis Motorcycle Rally may have departed western South Dakota, but public health departments in multiple states are trying to measure how much and how quickly the coronavirus spread in bars, tattoo shops and gatherings before people traveled home to nearly every state in the country.

From the city of Sturgis, which is conducting mass testing for its roughly 7,000 residents, to health departments in at least eight states, health officials are trying to track outbreaks from the 10-day rally which ended on Aug. 16. They face the task of tracking an invisible virus that spread among bar-hoppers and rallygoers, who then traveled to over half of the counties in the United States.

An analysis of anonymous cell phone data from Camber Systems, a firm that aggregates cell phone activity for health researchers, found that 61% of all the counties in the U.S. have been visited by someone who attended Sturgis, creating a travel hub that was comparable to a major U.S. city.

“Imagine trying to do contact tracing for the entire city of (Washington), D.C., but you also know that you don’t have any distancing, or the distancing is very, very limited, the masking is limited,” said Navin Vembar, who co-founded Camber Systems. “It all adds up to a very dangerous situation for people all over the place. Contact tracing becomes dramatically difficult.”

State health departments have reported 103 cases from people in South Dakota, Minnesota, Wisconsin Nebraska, Montana, North Dakota, Wyoming and Washington. Health officials in South Dakota have said they don’t know how many people were exposed and have issued public warnings of possible COVID-19 exposure at five businesses popular with bikers.

South Dakota Gov. Kristi Noem, a Republican, has defied calls to cancel large gatherings and opposes requirements to wear masks. She welcomed the event, which in previous years brought in about $800 million in tourist spending, according to the state’s Department of Tourism.

“I sat at a bar elbow-to-elbow with guys. No one was wearing masks,” said Stephen Sample, a rallygoer who rode back to Arizona last week.

He had visited a bar where health authorities later issued warnings — One-Eyed Jack’s Saloon — but said he had not had any COVID-19 symptoms. He discussed quarantining with his wife after he returned, but decided against it.

Other bikers said they had gotten tested for COVID-19 after they returned home and received negative results.

In a country where each state has been tasked with doing the heavy-lifting of responding to the pandemic, tracing every infection from the rally is virtually impossible. But the city of Sturgis is doing what it can to head off a local outbreak by holding mass testing for asymptomatic people.

The city, which is a sleepy tourist destination for most of the 355 days of the year outside the rally dates, was a reluctant host this year. After many residents objected to holding the rally during a pandemic, city leaders decided to pay for mass testing with money they had received as part of federal coronavirus relief funding.

About 850 people will be tested, according to Daniel Ainslie, the city manager.

On Monday morning, Linda Chaplin drove with her husband to get tested in the parking lot of the Sturgis Community Center. They had left town during the rally, but the crowds that came before and after concerned them.

While the results from the test will take a couple days to process, the region is already seeing an increase in coronavirus cases.

“For a long time, people would say, ‘Well, do you know anybody that has COVID?’ and I would say, ‘No, I don’t, but I’m watching the news,'” Chaplin said. “Now, I do know some people that we’ve heard have COVID.”

While Chaplin said the people she knows who have been infected had not participated in the rally, she said that many residents were relieved it’s over.

But like many places across the country, the city is trying to navigate the tension between health and economic concerns. Some residents, like Eunice Peck, were not concerned about the potential for an outbreak. She rented her home out to rallygoers as a way to make extra money. She had avoided the crowds that fill the city’s downtown and didn’t feel the need to get a test.

“It’s a very good thing for the town,” Peck said of the rally.

But events like Sturgis concern health experts, who see infections spreading without regard to city and state boundaries. Without a nationally-coordinated testing and tracing system, containing infections in a scenario like Sturgis is “almost impossible,” said Dr. Howard Koh, a professor at the Harvard School of Public Health who worked at the Department of Health and Human Services under former President Barack Obama.

“We would need a finely orchestrated national system and we are far from that,” he said. “We are really witnessing a 50-state effort with all of them going in different directions right now.”

Kris Ehresmann, infectious disease director at the Minnesota Department of Health, on Friday advised people to quarantine for two weeks if they attended the rally.

She said, “We’re expecting that we’re going to see many more cases associated with Sturgis.”