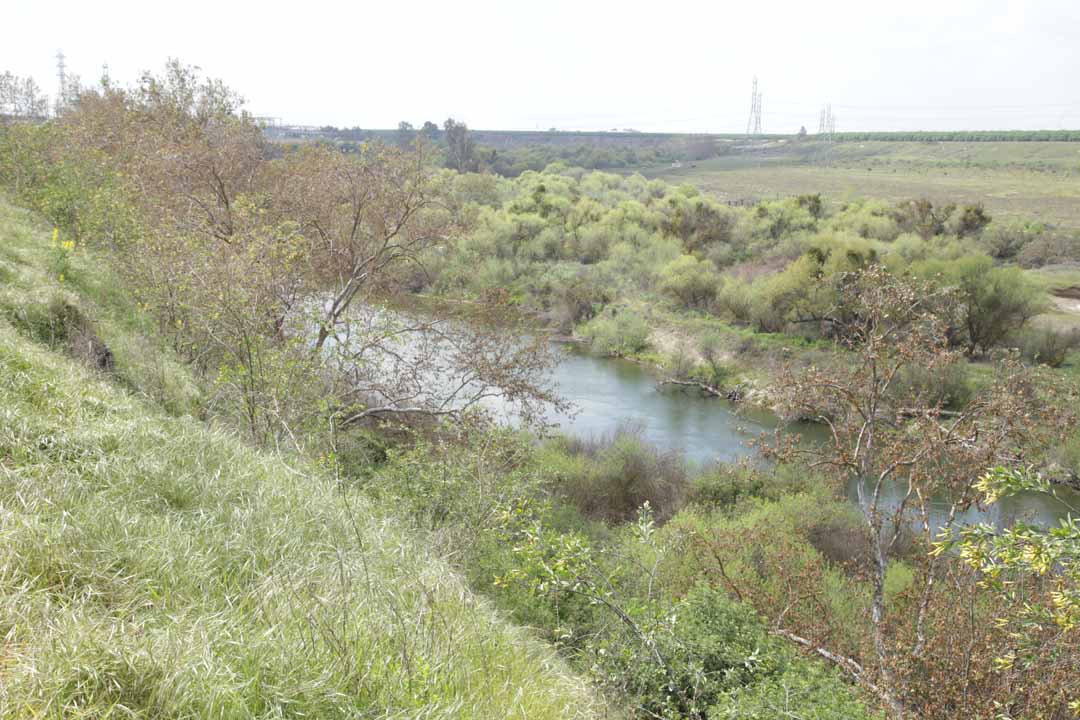 After decades in the making and years discussing the current plan, the government agency in charge of improving public access to the San Joaquin River has agreed on a path forward.

The San Joaquin River Conservancy board approved a plan to build roads and access points at both Spano Park in north Fresno, and at Riverview Drive in a residential neighborhood one mile away. The project, known as the River West Fresno, Eaton Trail Extension Project was approved in a 13-1 vote.

The Conservancy board approved plans for a paved road to the river bottom winding through what is now Spano Park, and another road through an existing gate at Riverview Drive.

If built, the project will provide vehicular access from the two locations to the river bottom, and will include parking spaces and trails. Currently in those areas, the only access is by foot.

Getting to this point took years of negotiation, wading through government bureaucracy and appealing to groups with sometimes disparate interests. The next step is to make the plan a reality.

With the vote, the board approved plans for a paved road winding through what is now Spano Park, a small greenspace at the end of Palm Ave. north of Nees Ave.; and a road through an existing locked gate at Riverview Drive.

The conservancy board is made up of 15 members (there is currently one vacancy), appointed by the various government agencies with interest in the river.

Santos Garcia, the Madera City Council’s representative on the board, voted no. He wanted more time to study the plans. 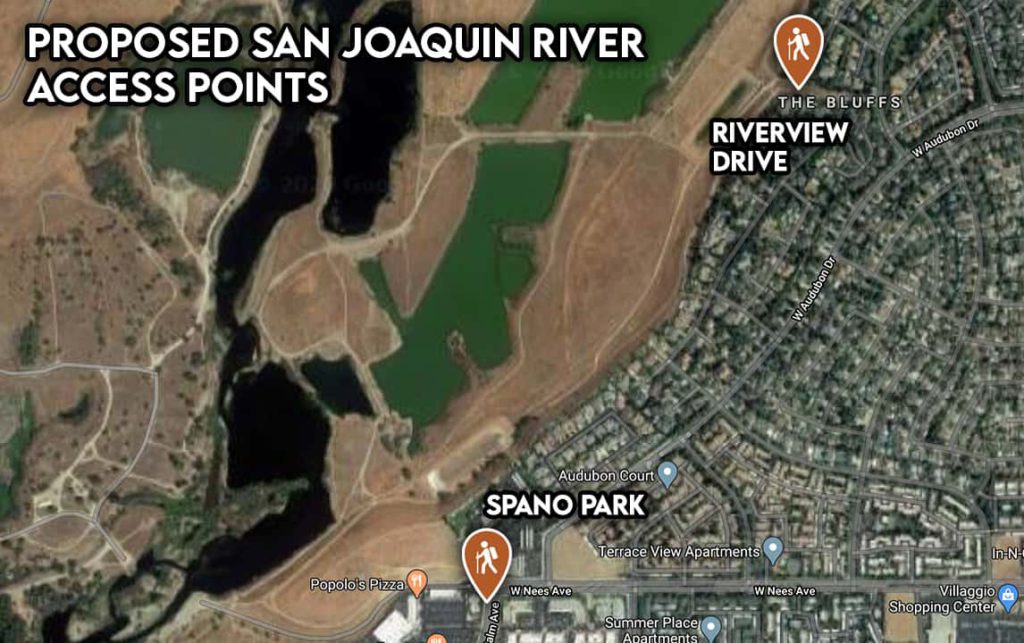 Under the proposal, vehicle access roads to the San Joaquin river bottom will be constructed via Spano Park and Riverview Drive. (San Joaquin River Conservancy)

According to board documents, a lighted, 15-space parking lot will be built inside a gate at Riverview Drive. The city of Fresno will also provide an additional 15 markings for street parking at the top of the road.

The road and parking will accommodate buses, but not horse trailers. An ADA-accessible restroom will be constructed in the bus parking area.

The conservancy would also expand the Eaton Trail, from Perrin Ave. near Highway 41 to Spano Park. The plan calls for a 50-space parking lot in that same area.

While board members voted to approve the access points, they did not discuss how the improvements would be paid for.

In 2019, the city of Fresno estimated the cost to build out Spano Park would be $3.2 million. Through various bond monies, the conservancy has $30 million available for capital expenditures and purchases, according to SJRC executive officer John Shelton. The city in the past has committed to some maintenance.

“I’m glad today’s here and it looks like we will have two more access spots,” Steve Brandau, Fresno County Supervisor and member of the board, said. 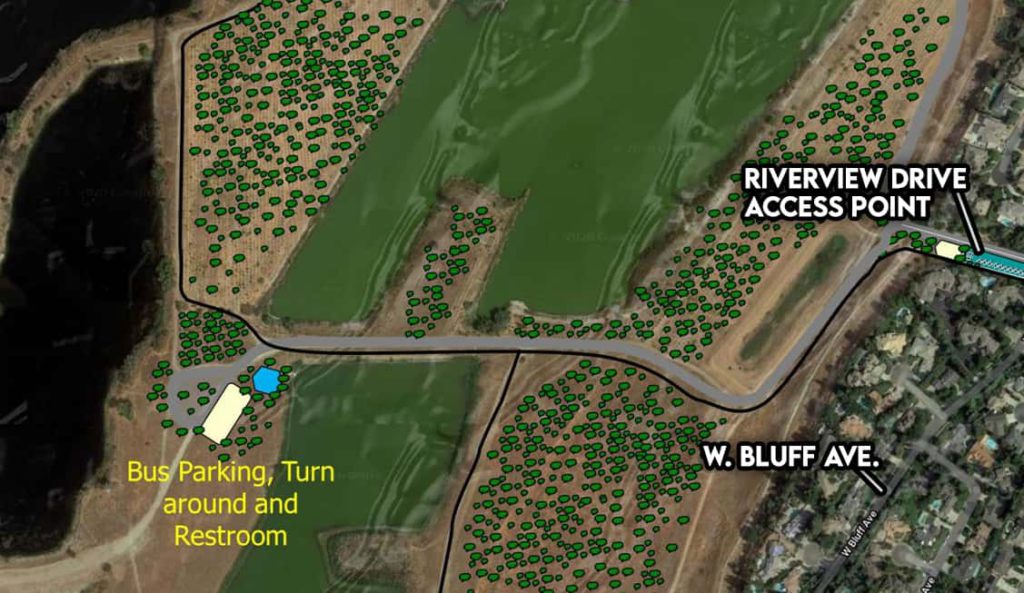 An access road beginning at Riverview Drive will lead to parking areas for cars and buses under a proposal approved Wednesday. (San Joaquin River Conservancy)

Prior to a Dec. 2017 vote to approve the Spano Park plan — known as Alternate 5B in SJRC documents — a debate raged as where to move ahead with public access to the San Joaquin River.

Supporters of the Riverview Drive plan — known as Alternate 1 — felt it offered the best access for most people. Bluff neighborhood residents strongly objected because of traffic and environmental concerns. Neighbors in the Pinedale area just south of Spano Park supported 5B because of its proximity.

At the time, the board set a one-year timetable to meet certain benchmarks to move forward with the Spano project. The benchmarks included acquiring property at the river bottom from a third party, obtaining approvals from other government agencies, and securing public access rights.

About 15 months later, in March 2019 the board reviewed the plan’s progress. Members voted 7-7 that the Spano Park plan had not meet the benchmarks and that the Riverview Drive proposal should be revived as a backup plan. The tie vote meant that the Spano Park benchmarks were not approved, but the 5B plan wasn’t rescinded either.

Things had been at a relative standstill since then. The land below Spano Park, which is needed to bring the access project to fruition, belongs to the San Joaquin River Access Corporation. They had a tentative agreement to allow public access, but when the board seemingly opted away from the plan, SJRAC sued.

In a separate action Wednesday, the board voted in closed session 13-1 to settle the suit, and pay $125,000 for an easement that is more expansive than in the original agreement. 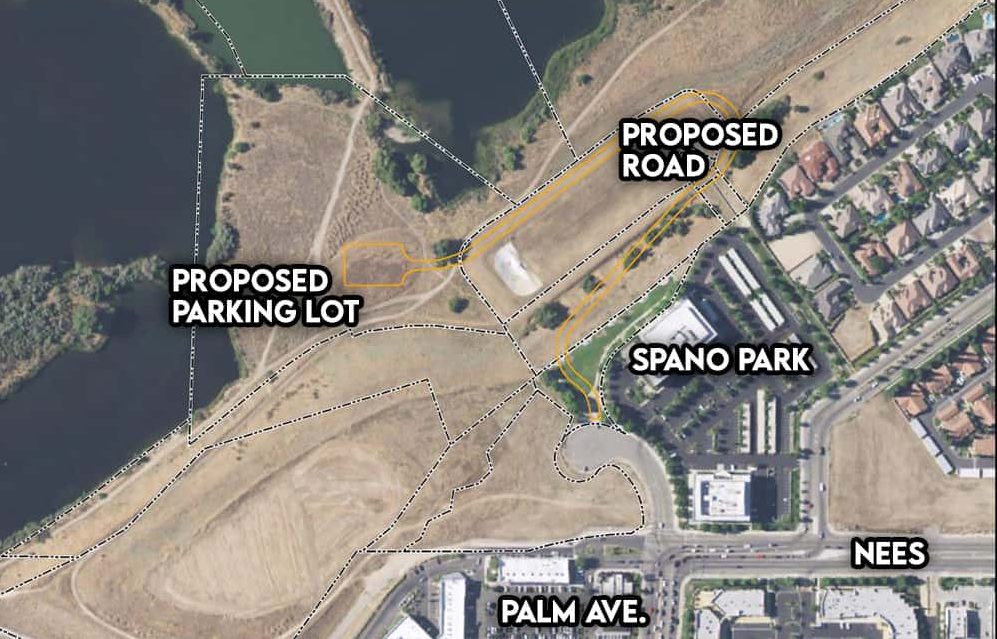 Calls for Another Delay

“A lot of folks (are sheltering) in place and getting cabin fever. They’re looking for places to have access to get out and to still be socially distant and be healthy.” — Rep. Jim Costa

One of the biggest debates during the meeting Wednesday wasn’t about access, but whether a decision should be made that day.

Garcia, the Madera councilman, was concerned about a lack of public input, partially because of COVID-19. The meeting was held by Zoom video conferencing.

“I’m concerned that if we make a motion and pass this today, the public has not been fully informed of what we’re doing,” Garcia said.

Other members disagreed, saying the project has received a fair hearing.

“This has been vetted out and we have discussed this at length multiple times in public. This is not something that’s new,” Madera County Supervisor Brett Frazier said. “If we continue to delay this, it’s only going to continue to delay access for our residents and the people of the state of California.”

Rep. Jim Costa (D – Fresno) called in, urging the board to make a decision. He said people are looking for a place to recreate, especially in the era of COVID-19.

“A lot of folks (are sheltering) in place and getting cabin fever. They’re looking for places to have access to get out and to still be socially distant and be healthy,” Costa said.

The board should “move the ball forward,” he added.

“I just want to formally state that this is a terrible implementation of the public meeting law. And it’s very difficult to feel like this is actually a public process when we have no idea really who is paying attention, who’s listening, who’s speaking. There’s no transparency here,” Weaver said.

Garcia proposed to table the vote, but did not receive a second to his motion.

In other action, the board unanimously approved the purchase of the Sumner Peck Ranch land on Friant Road by a 14-0 vote. The deal will use $3.6 million in previously approved bond money for the 76 acre ranch and farm, which also features a winery.

The land will be granted to the San Joaquin River Parkway and Conservation Trust. That group will chip in $96,000 toward the purchase.

“The Trust intends to continue operating the site as a farm and special event venue in the short term, defined here as the first three-to-five years after acquisition,” board documents say.  “This will allow time to request funding and plan habitat enhancement to return the site to wildlife habitat with a natural surface trail system. Ultimately the site will be operated to benefit people and wildlife along the San Joaquin River Parkway.”

Big Creek Has Essential Workers, a Closed School, and No Child Care Center for Kids