A family says they were targeted because of their race during a July 4 confrontation with Fresno County sheriff’s deputies at a popular local lake. The department says the family group escalated a situation that could have been settled calmly.

A video posted on social media the day after, but garnering more attention in recent days, shows deputies and members of the Reyes family engaging in a physical confrontation on the shores of Shaver Lake, in the mountains above Fresno.

Posted by a woman who says she is the sister of those involved, the two-minute video starts with deputies arresting a man — identified by the sheriff’s department as Jacob Cuellar Reyes, 29, of Morgan Hill.

“We were doing nothing wrong! A jet ski ticket turned into all these sheriffs pulling up fast! There was no need for the police to brutally attack my [sic] brothers , sister in law and my cousin. All we did was ask why,” Twitter user @mirandag400 said.

A sheriff’s spokesman confirmed the authenticity of the video.

Yesterday my family and i were at Shaver lake in fresno county. We were doing nothing wrong! A jet ski ticket turned into all these sheriffs pulling up fast! There was no need for the police to brutally attack mf brothers , sister in law and my cousin. All we did was ask why, pic.twitter.com/Fymid9w5MX

“They were being loud, cussing and some were drunk.  This created a nuisance to families nearby who were trying to relax.” — Fresno County Sheriff’s Office spokesman Tony Botti

About the only thing both @mriandag400 and the sheriff’s department agree on is that is started with an incident about a jet ski.

According to sheriff’s department spokesman Tony Botti, the watercraft was rented from Shaver Lake Marina and was overdue for return. Three renters needed the jet ski towed back because it ran out of gas.

When informed that it was overdue, the men became belligerent toward marina employees — arguing, spitting sunflower seeds and lighting up a marijuana joint.

Shaver Lake Marina owner Greg Powell, speaking for his employee during the incident, confirmed that part of the story.

“I think they were drunk and belligerent, and that’s why the police went after him. Otherwise, they wouldn’t,” Powell said.

The men then took off on a jet ski of their own.

“The worker notified sheriff’s deputies on the patrol boat what had happened and that these three guys were possibly boating under the influence,” Botti said. “Deputies spotted the jet ski going too fast through a no wake zone and attempted to stop them.  They pulled up to the shore and (Gabriel) Lozano and Reyes jumped off and run over to join a large group of people.”

The third man, Larry Schular, was issued a speeding ticket.

Melee Breaks Out During Arrest

That’s when the other two men — identified as Reyes and Lozano — were confronted by Sheriff’s department boat and land patrols.

In the video, deputies are seen handcuffing Cuellar Reyes. Family and friends are heard asking what he did, and for the deputies’ badge number.

That’s when mayhem broke out. Other people in the party engaged with the deputies.

The video shows 28-year-old Samuel Reyes of San Jose entangling with a deputy. He is tackled to the sand. A woman — identified as Raquel Rios, 29, of San Jose — also gets into a scrum.

Deputies also took 37-year Lozano of Fresno down to the sand.

One deputy is seen displaying a baton to prevent bystanders from jumping in the melee. It does not appear that the deputy struck anyone with the weapon.

Both Lozano and Rios were charged with resisting arrest. They were released from jail with a citation an hour later, according to the department.

Cuellar Reyes was arrested for being drunk in public and was also released.

Samuel Reyes was arrested and charged with deterring an officer by threat or violence. He was released after posting a $30,000 bond the next day, Botti said.

“They were being loud, cussing and some were drunk.  This created a nuisance to families nearby who were trying to relax.  Deputies detained the first man in the video who was intoxicated.  The plan was to issue him a warning and deliver a message to the group to settle down and have respect for other visitors.  However, people in the group became more rowdy and resisted deputies,” Botti said.

Botti pointed out the portion of the video where Samuel Reyes grabbed a deputy’s arm.

“From there things got out of control and deputies tackled some of the folks.  They ended up arresting a few for resisting arrest and the first guy was arrested for drunk in public.  Sadly this whole thing could have been avoided, but the group chose to get hostile,” Botti said.

GV Wire℠ attempted to reach @mirandag400, but did not receive a reply by time of publication. 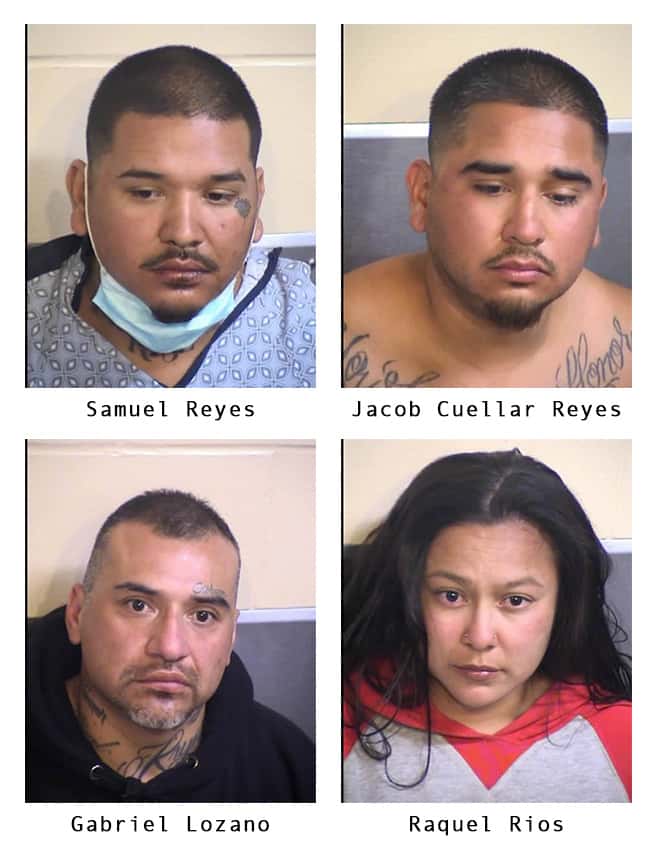 A second video of the incident shows deputies tackling the first man arrested for suspicion of being intoxicated.

A GoFundMe page has been set up for the people in the video, identified as the Reyes family.

On the page, racism is blamed for the deputy’s actions.

“What happens when one of the jet skis runs out of fuel, and the racist rental company involves the local Fresno sheriff? When local law enforcement see’s brown people in white labeled spaces watch how they respond. All they care about is skin color. THIS IS POLICE TERRORISM.  Many of their family members were falsely arrested,” the GoFundMe description says.

“This was not a case of police terrorism or racism.  This was a case of unruly behavior by a large group of people who had a great chance of being let off with a verbal warning.  Instead, their defiance escalated the situation and resulted in several arrests being made.  It’s a shame that this group disrupted many families who were enjoying their holiday at the lake,” Botti said.

Botti said a boating deputy accidentally scratched the jet ski belonging Schular and provided information to report a claim to the county.

But, Botti denied another allegation made on Twitter that deputies deleted the smart phone videos.

“This is not true.  We asked them to send us their videos, but they never did.  The first time we saw the videos is when they were posted on social media,” Botti said.

floor, for no reason. His hands were handcuffed and they forcefully pushed him to the ground. @FresnoSheriff There is no excuse for what happened to us yesterday! My nieces and nephews now have this memory they’ll sadly keep. @FresnoBee @FresnoSheriff pic.twitter.com/ScpTcVL3ki