Financial services play a major role in the economic lives of most Americans, from the moment their paychecks are directly deposited into a bank account to the loan taken out to buy their first home or car.

Yet over 12 million people – about 6% of U.S. adults – cannot access these services because they do not have a bank account. Economists call these individuals financially excluded or the “unbanked.” Being unbanked is costly, both financially and in terms of missed economic opportunities, and afflicts communities of color most.

The coronavirus recession exposes these costs even further. For example, the unbanked have had to wait much longer than those with accounts to get “economic impact” checks – and some are still waiting. Prompt access to emergency lending is vital to helping poorer Americans endure the crisis.

As an economist who studies financial exclusion, I believe there’s a solution to the problem, and one that the U.S. has tried before: postal banking.

The Costs of Financial Exclusion

Financial exclusion is not a new problem.

Its roots in the U.S. can be traced back to the New Deal’s Federal Housing Administration, which limited mortgage lending to middle-income, predominantly white suburbs. The problem grew worse in the 1980s and ‘90s, when deregulation allowed banks to operate across state lines, leading to a decline in the number of community banks. National banks were less willing to lend in low-income neighborhoods.

While some people avoid banks because of the fees, being left out of the banking system has other costs. With less access to other lines of credit, the unbanked are more likely to use expensive alternatives such as title loans – in which a borrower uses a vehicle title as collateral – for emergency expenses. Annual interest rates on such loans can be as high as 300%.

And being unbanked means it’s harder to develop a credit history. Without one, it is more difficult to get a mortgage loan – and thus much harder to buy a home.

Black Americans in particular are more likely to lack credit scores and are 40% less likely to be homeowners. Since homeownership is one of the main sources of wealth for middle-class Americans, this contributes to the large racial wealth gap. 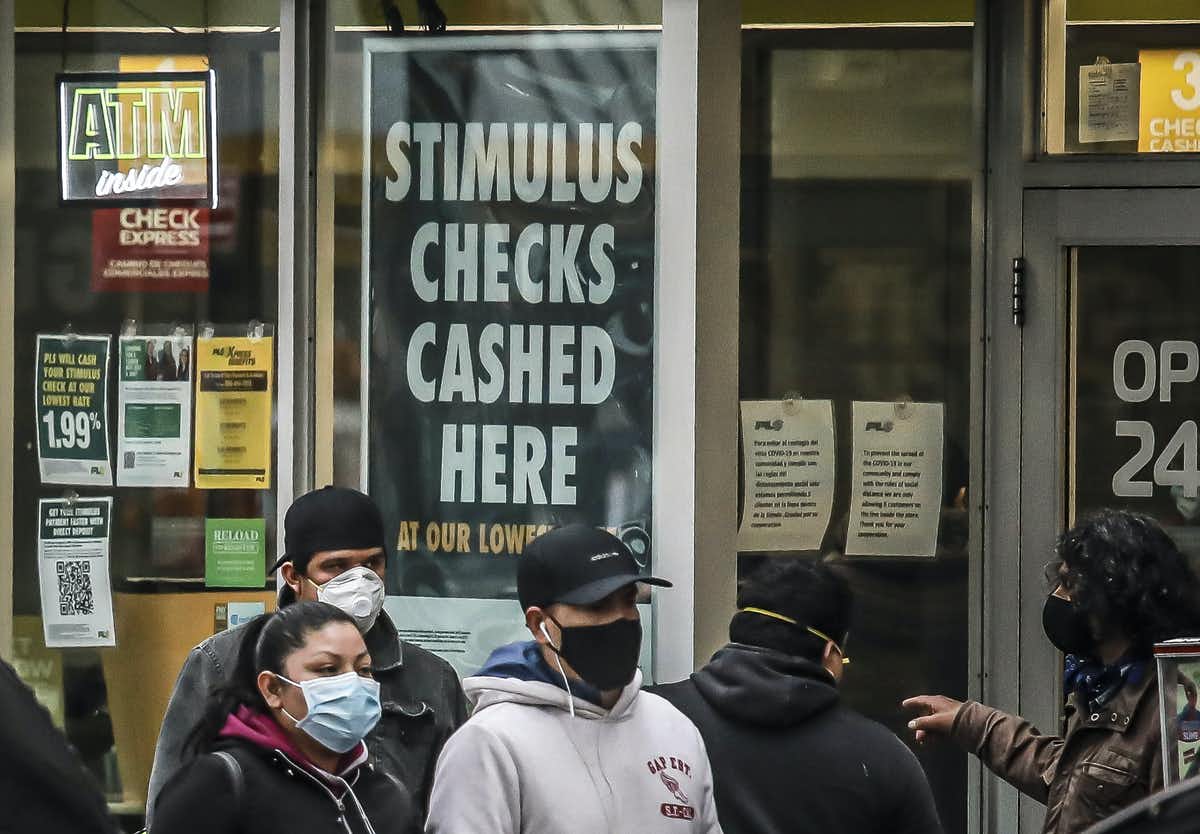 The unbanked had to wait longer for their stimulus checks and had to find unconventional ways to cash them. (AP Photo/Bebeto Matthews)

COVID-19: Worse for the Unbanked

The COVID-19 pandemic, by causing a dramatic collapse in economic activity and skyrocketing unemployment rates, has compounded these problems.

Even in good times, more than 10% of Americans report they are unable to pay for an unexpected US$400 expense – and would struggle even more without access to credit.

Those without a banking account have even fewer options to get emergency cash, such as title or payday loans. Another option, which my research shows is especially true among women of color, is asking friends or family for money. Yet with unemployment rates reaching a staggering 19.5% for Hispanic women and 17.5% for black women, community resources will be stretched thin.

[Get the best of The Conversation, every weekend. Sign up for our weekly newsletter.]

Financial exclusion also hampered the rollout of part of the coronavirus bailout that promised stimulus payments of up to $3,400 per family. Americans with checking accounts received the payment within a few weeks via direct deposit, while those without one had to wait far longer. As of early June, 13 to 18 million Americans who were expecting a check still had not received one.

This delay is more than an inconvenience for households living paycheck to paycheck. Many Americans urgently need prescriptions they can’t afford and are at risk of being evicted from their homes.

Postal banking, however, could serve the unbanked and do so efficiently. While there are various ways to do this, a basic postal banking system would allow every United States Postal Service branch to act as a limited-service bank, offering services like checking and saving accounts, pre-paid debit cards and small loans.

As a public corporation that doesn’t need to worry about rewarding investors, the USPS could offer financial services to more Americans at a lower cost than banks. USPS branches are already located in virtually every neighborhood in the U.S., and over half are in banking deserts. This existing network would reduce overhead. And the USPS is in a better position to handle a loan default because it could garnish tax refunds, reducing the cost of collecting on unpaid loans.

What’s more, this would also offer a financial lifeline to the postal service, which has been losing money for over a decade. The USPS predicts that offering postal banking services could provide between $8 billion and $10 billion in additional revenue a year, which would offset at least some of its current shortfall.

A Postal Savings Certificate of Deposit from 1941. (Smithsonian National Postal Museum, CC BY)

History and current practice show that postal banking is feasible. It is already used in 139 countries around the world, such as France, New Zealand and Italy.

And in the U.S., Congress created a government-guaranteed savings scheme in 1910 to encourage people to put their money in the financial system – as opposed to their mattresses and cookie jars. According to “How the Other Half Banks,” by banking law expert Mehrsa Baradaran, the United States Postal Savings System was quite popular. As its peak, it held $3.4 billion in deposits.

But after World War II, conventional banks began to offer much higher interest rates on their deposits – with the same government guarantee. And banks began to open up branches in more underserved neighborhoods. The postal savings system stopped taking new deposits in 1966. 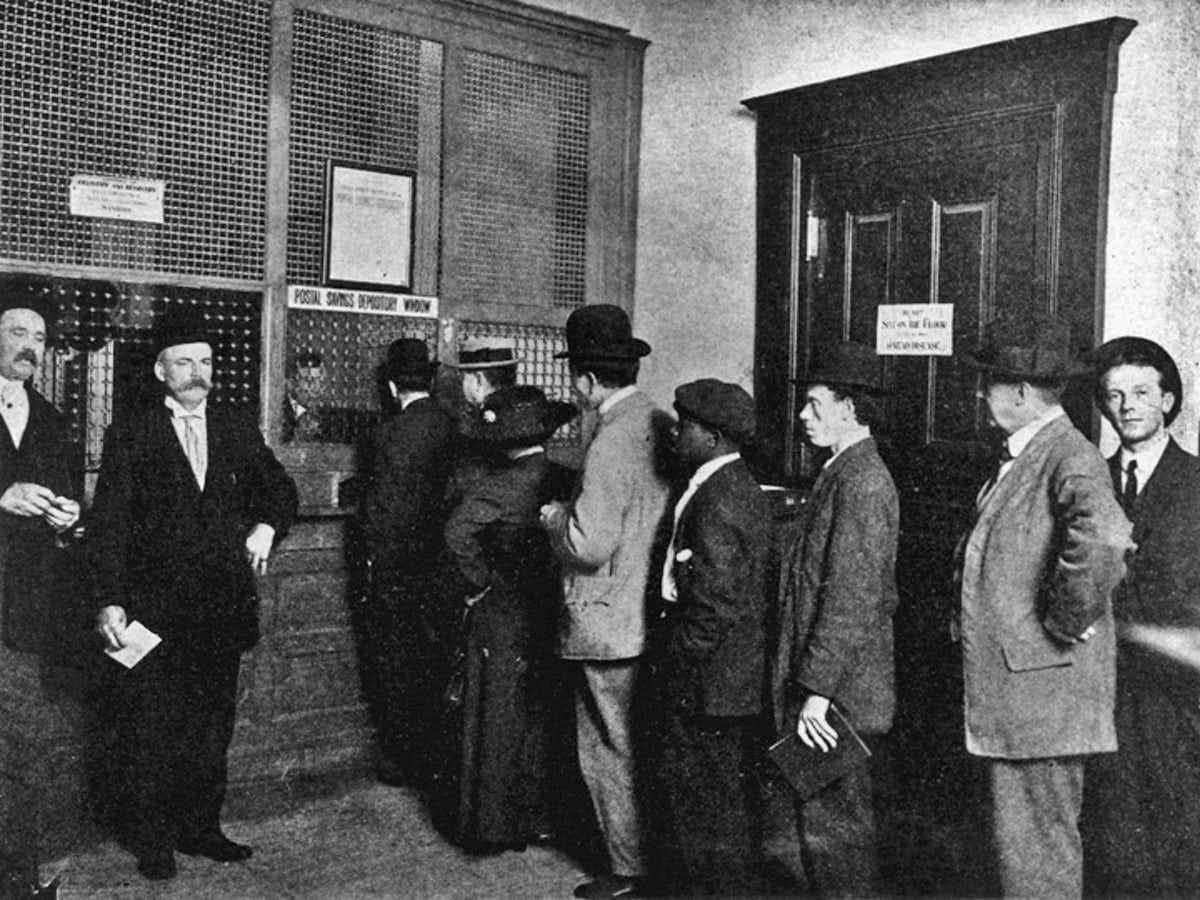 Depositors stand in a queue at a postal savings window. (Smithsonian National Postal Museum, CC BY)

Now, a growing chorus of voices suggests the time has come to bring it back.

The details differ from proposal to proposal. Some proponents – including USPS itself – see postal banking as a complement to private sector banks, which would continue to offer a wider range of services. Others support a public bank that would compete directly with private banks through a financial services marketplace.

Banks, including small community banks, have generally opposed postal banking. Yet the experience of other countries suggests that a postal bank can coexist with a thriving financial services industry – while ensuring fewer Americans are left behind.