Football Players Back on the Field at Fresno-Area Schools, But No Tackling Yet 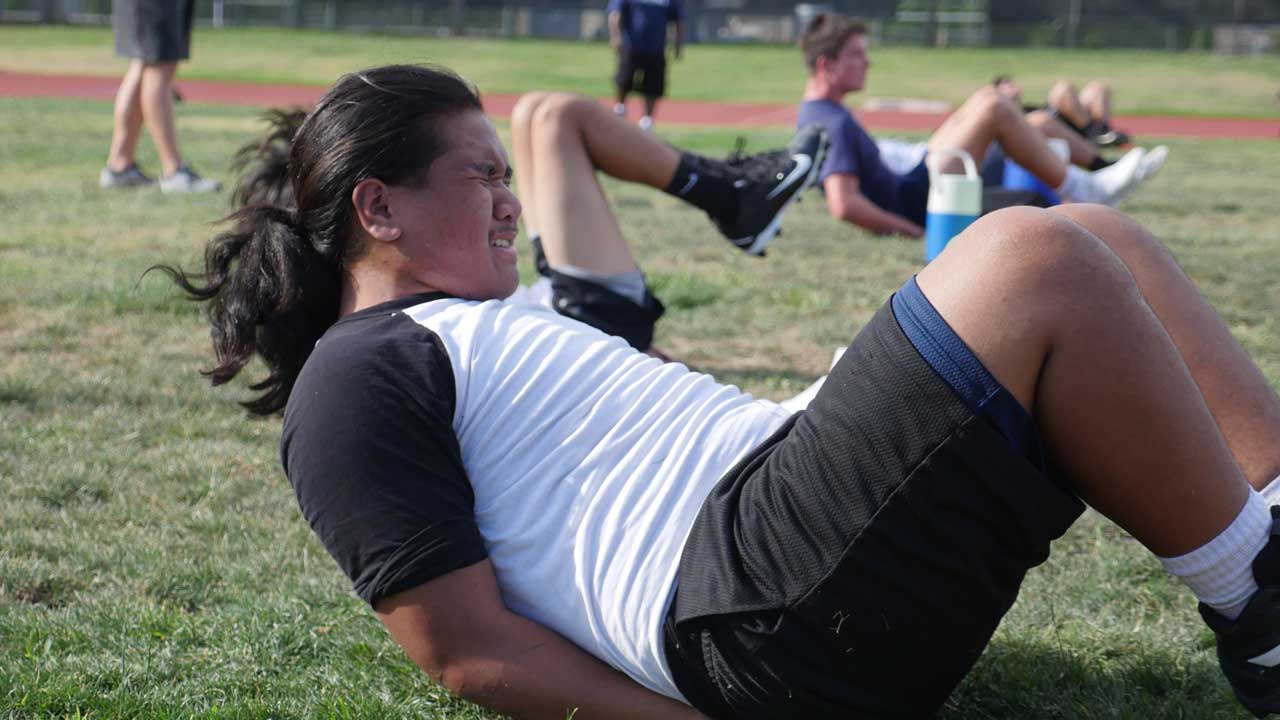 Football practices look considerably different at high schools in the Fresno area this summer as teams adapt to restrictions designed to help protect players from the coronavirus.

For now, at least, there’s no tackling, no ball-passing, and no contact between players. Coaches are throwing “air passes” — think “air guitar”— to players running patterns while defenders shadow but do not approach them.

For their safety, players are supposed to stay at least 6 feet apart during workouts and drills.

Call it one of the ironies of COVID-19.

Having players keep their distance from each other, said Matt Giordano, former NFL safety and the football coach at Buchanan High School, is “kind of the opposite of football, which is all about closing the distance.”

But Giordano and other school and county health officials say it’s important to follow established safety protocols for sports, because their top priority is to keep student-athletes healthy and protect them from the highly contagious virus. 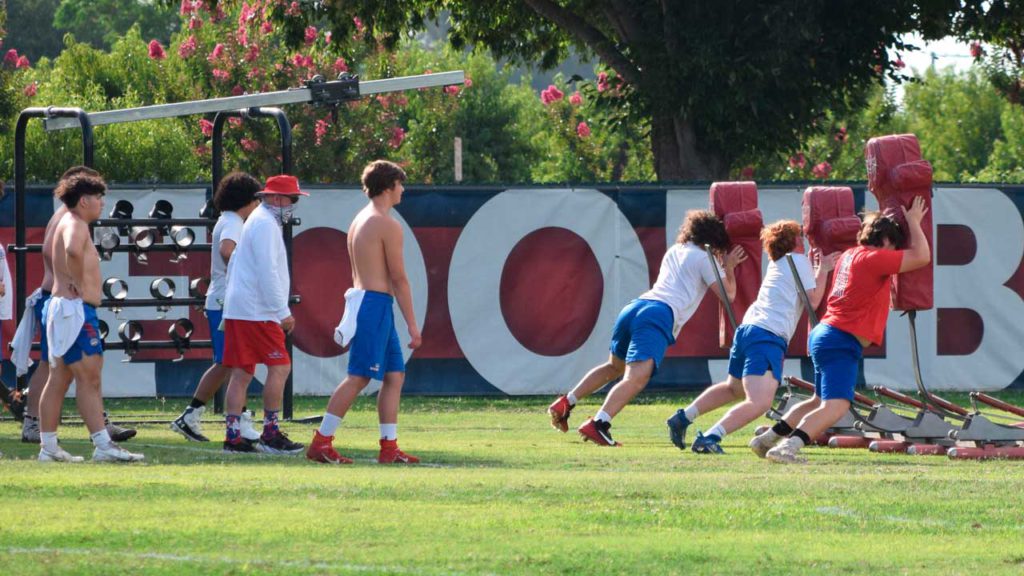 Because of the continuing increase in COVID-19 cases in Fresno County, scrimmages and actual games won’t be on the radar anytime soon, assistant public health director David Luchini said Wednesday.

“That’s one of the biggest questions we get, when can we have football?” he said. “I have no clue.”

The Fresno County Department of Public Health released a 10-page guidance for youth sports teams on Tuesday, the day after Fresno Unified teams had the green light from the district to resume workouts and weeks after Clovis and Central players started theirs.

Luchini said county public health officials are having regular conversations with districts and athletic directors about the guidelines to keep players safe, including keeping them separated, having them wear face masks when they are coming to and leaving practice, making sure they provide their own water bottles, and reminding them to wash their hands and use hand sanitizer.

Districts and schools are responsible for making sure that students and parents understand the protocols and are willing to follow them.

Fresno County is now at Phase 2 in its guidance, which recommends that players maintain a safe distance and work out in “pods” so as to limit contact to fewer players and thus decrease the potential for the virus to spread across teams. Players involved in weight training should be working out with lighter weights that don’t require a spotter, Luchini said.

According to the guidelines for Phases 2 and 3, players should not share equipment such as sleds or tackling dummies.

However, on Wednesday morning on the practice field at Buchanan High in northwest Clovis, players took turns pushing sleds as tackling dummies were lined up on the field.

Luchini said there isn’t much the county can do to enforce the guidelines, and he has warned athletic directors that “if you go jumping the gun, you’re putting people at risk.” 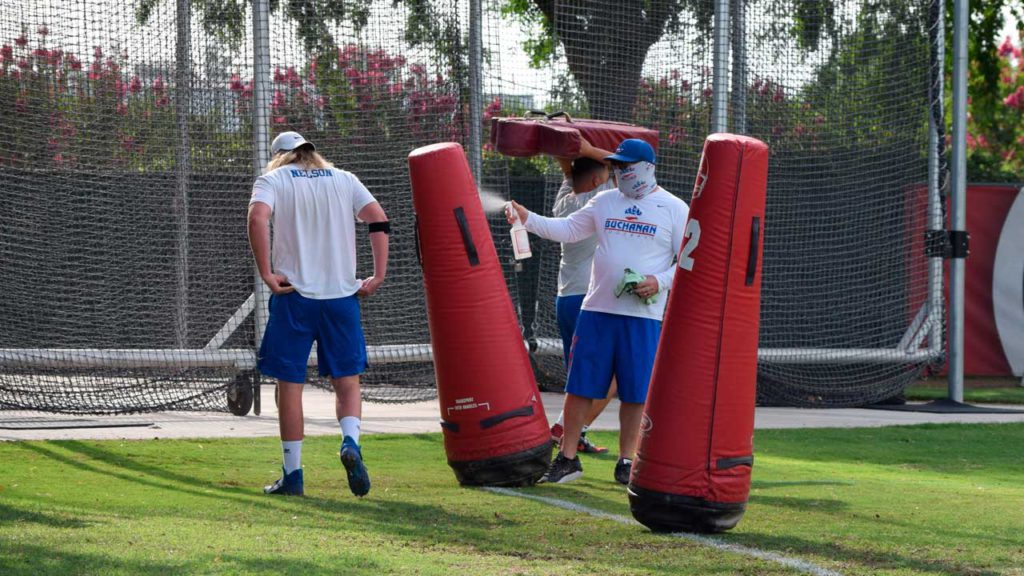 But Giordano said the staff at Buchanan are taking care to wipe off the equipment between uses with disinfectant to keep students safe.

“We have to do that. Our job is to protect the kids first.”

Even so, players pushing on sled bags are pretty close together and not maintaining a 6-foot gap, said Bullard High football coach Don Arax.

“I’m concerned about some of the schools and districts moving too quickly,” he said.

If the coronavirus spreads, Arax said, “we can’t have a season.”

At Bullard High in northwest Fresno, orange plastic markers on the ground show where each player can work out and be safely distanced from other teens. Even though the recommendation is 6 feet, Arax said he opted for a distance of 8 to 10 feet.

Bullard’s first practice was on Tuesday with returning players, who were joined at Wednesday’s practice by the incoming freshmen, Arax said.

Tuesday’s practice was not as intense as in past years in recognition that many students were quarantined at home for months and more sedentary than usual, Arax said.

He said he expected about 80 players once the incoming freshmen joined the workouts. Only a few students have stayed away, and Arax said he understands the families’ concerns.

“The grandparents are nervous — this has taken a toll on the African American community. I understand it completely.”

Bumper Crop of Players at Buchanan

At Buchanan, Giordano said he’s seen the most students turn out for the three squads — freshmen, junior varsity, and varsity — in his five years of coaching there.

Players at Buchanan and other Clovis Unified high schools started workouts on June 8. 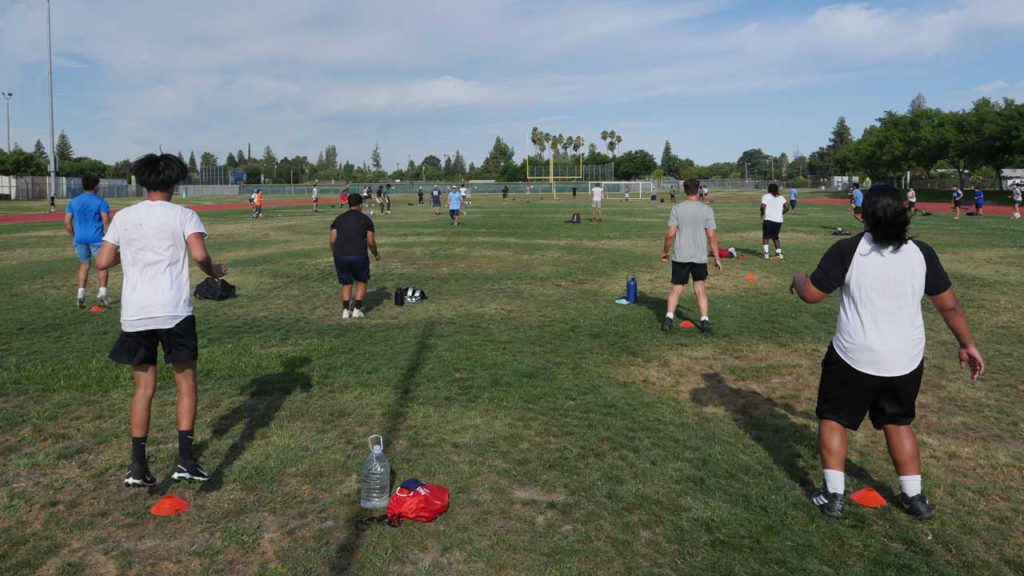 Giordano said players are eagerly awaiting July 20, when the California Interscholastic Federation releases the season schedule, which could begin earlier in the fall or as late as January.

Since there’s no way of knowing how soon the season will start, school and health officials agreed that students should begin conditioning workouts to lower the risk of injuries during the season, said Central Unified Superintendent Andy Alvarado.

Central High is adhering to the same rules — face masks, 6-foot distance, no contact — as other schools, Alvarado said.

Will We Have Friday Night Football?

The season will depend on large part on coronavirus infection rates and hospitalizations in Fresno County, Luchini said.

Individual teams also could be sidelined by an outbreak.

Arax said it’s still not clear what actions health officials will advise should only a few players test positive for COVID-19.

“We know what will happen if 10-15 get it, but no one can answer, what if one or two kids on a team get it?” he said. “And it’s not realistic to think that kids will not come down with COVID.”