LOUISVILLE, Ky. — Louisville’s police chief was fired Monday after the mayor learned that officers involved in a shooting that killed the popular owner of a barbecue spot failed to activate body cameras during the chaotic scene.

David McAtee, known for offering meals to police officers, died early Monday while police officers and National Guard soldiers were enforcing a curfew amid waves of protests over a previous police shooting in Kentucky’s largest city. Police said they were responding to gunfire from a crowd.

“This type of institutional failure will not be tolerated,” Fischer said. “Accordingly, I have relieved Steve Conrad of his duties as chief of Louisville Metro Police Department.”

“This is the entire reason that we have those cameras,” the Democratic governor said at the state Capitol in Frankfort. “And every other officers’ cameras should be reviewed, and if they captured any part of the scene it ought to be released.”

Beshear authorized state police to independently investigate the shooting. He pledged the probe will be conducted in an “honest and transparent way that will not take months.”

U.S. Attorney Russell Coleman announced that federal authorities will be part of the investigation.

“We understand this community’s need for answers and we will assess all the information, and will take any appropriate action that is warranted by the facts and the law.” Coleman’s office said.

The governor said he had counted on body camera footage to help determine “the truth in a way that spoke for itself, at a time when trust is difficult and people deserve to be able to see and evaluate.” 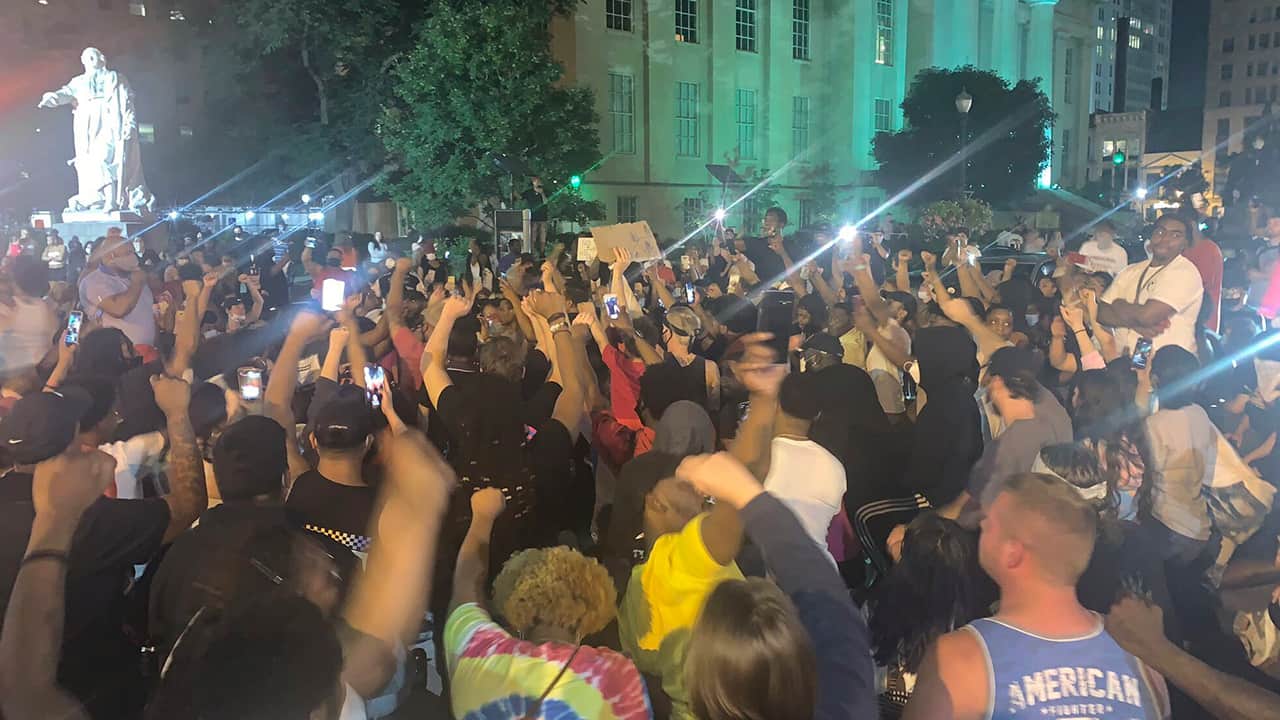 In a photo provided by Jada W., protesters gather Thursday, May 28, 2020, in downtown Louisville, Ky., against the police shooting of Breonna Taylor, a black woman fatally shot by police in her home in March. At least seven people were shot during the protest. (Jada W. via AP)

The shakeup at the top of the city’s police department came a month earlier than expected. Conrad had previously announced his resignation, which was to take effect at the end of June. Deputy Chief Robert Schroeder will step in immediately as chief, Fischer said.

The mayor also said the city’s curfew was being extended until June 8.

Police did retrieve video from crime center cameras that showed how the shooting unfolded, Schroeder said.

“It is taken from a distance, but it gives an overview of the scene and clearly shows the officers reacting to gunfire,” he said.

Two Louisville officers and two Guard soldiers returned fire, he said. The two officers violated policy by not wearing or activating body cameras, Schroeder said, adding they have been placed on administrative leave.

McAtee, whose YaYa’s BBQ Shack is near where the shooting occurred, was mourned by hundreds of people who returned to the site hours afterward.

“I’ve never known him to be aggressive in any kind of way,” he said.

Schroeder agreed that McAtee was friendly to police officers. “Over the years he’s been a good friend to the police officers … frequently making sure our officers had a good meal on their shifts,” he said.

Before his dismissal, Conrad confirmed the shooting happened around 12:15 a.m. Monday outside a food market on West Broadway, where police and the National Guard had been called to break up a group of people violating the city’s curfew.

Someone fired a shot at law enforcement officials, and both soldiers and officers returned fire, he said. Several “persons of interest” were being interviewed, he said.

News outlets showed video taken by someone in a car parked at a gas station. It recorded the sound of bullets being fired as groups of police and Guard soldiers crouched behind cars.

Protesters Have Been Demanding Justice for Breonna Taylor

Kris Smith said he was at a restaurant — “just outside having a good time, having drinks, eating barbecue” — when the soldiers arrived.

He heard a loud noise, and a few minutes later gunfire, he said.

Smith, who is black, said the group had nothing to do with the protests.

“Never thought I would experience that here in America,” he said.

Last week, before the National Guard was mobilized, seven people were wounded when gunshots erupted during a protest in downtown Louisville. Police said none of the seven, who are recovering, were shot by police. They have not announced any arrests.

Protesters have been demanding justice for Breonna Taylor, a black woman killed in her home in Louisville in March. The 26-year-old EMT was shot eight times by narcotics detectives who knocked down her front door as they attempted to enforce a search warrant. No drugs were found in the home.

After Taylor’s death, the mayor said Louisville police would be required to wear body cameras. Fischer said recently that officers in plainclothes units like the one that served a warrant at Taylor’s home would now wear the cameras during search warrants.

Taylor’s mother, Tamika Palmer, renewed her plea for peace Monday while demanding justice for her daughter.