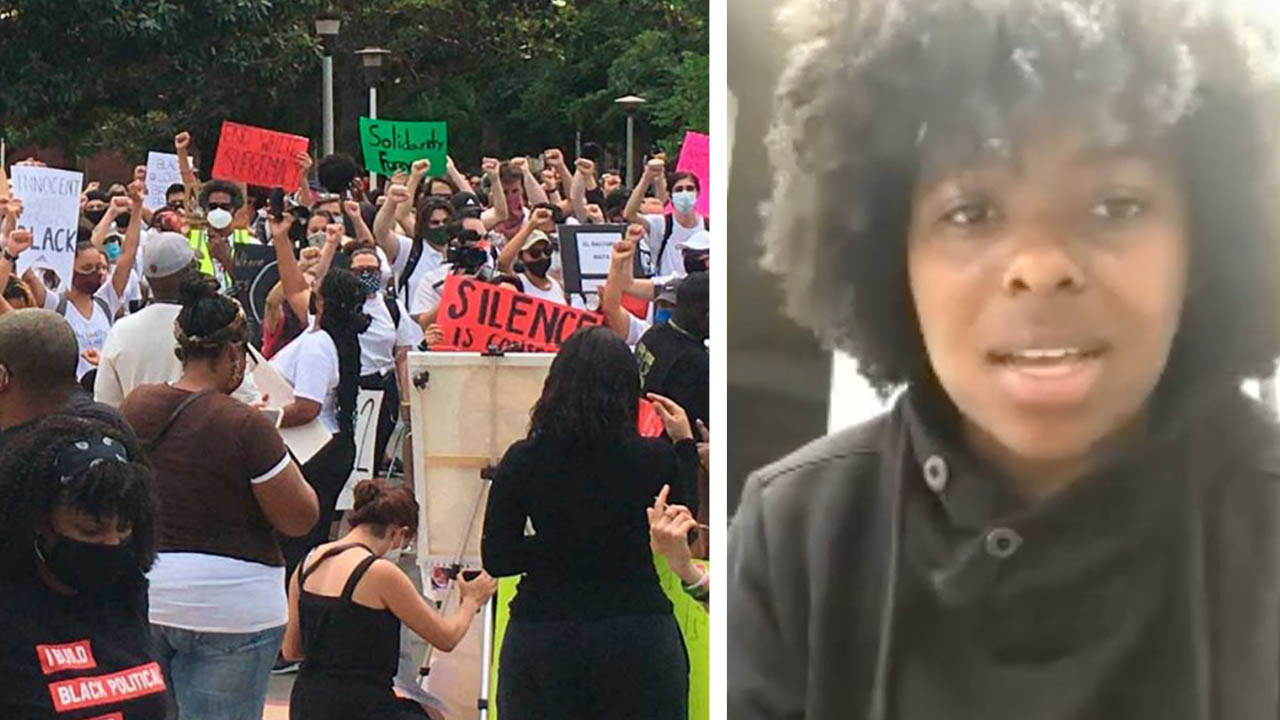 Leaders of Sunday’s Fresno State student-led rally at Fresno City Hall said Monday they were grateful that it was a peaceful political expression that drew participants from all parts of the city and beyond.

“To see the police officers respond with so much force … I could not lead people into a bloodbath.” — Fresno State NAACP chapter head D’Aungillique Jackson

And they promised that there will be more action to come, because the presence of thousands of protesters clearly indicates that a lot of people are interested in change.

When members of the Fresno State chapter of the NAACP started planning the rally on Friday, they initially had expected that a couple hundred people might show up Sunday for the rally and march, one of many nationwide to protest the killing of Minneapolis resident George Floyd by police.

Chapter president D’Aungillique Jackson wanted one thing above all — that the event would remain peaceful and not explode in the kind of violence and looting that has marked other protests.

Jackson already had seen it firsthand at a San Jose protest where police used rubber bullets and tear gas on marchers.

“To see the police officers respond with so much force … I could not lead people into a bloodbath,” she told GV Wire Monday.

So, even though they had less than 48 hours to plan the protest,  the student leaders were ready when nearly 10 times as many people as expected showed up in front of Fresno City Hall.

“It struck a nerve in me. Something needed to be done.” — Fresno State alum Joshua Slack

No stranger to organizing, Jackson, a psychology senior at Fresno State, teamed up in Zoom meetings to make plans with a core group that included Fresno State alum Joshua Slack and others.

Slack, 24, who graduated in 2018 and now is attending acting school in Los Angeles, had come home to Lemoore to hunker down with his family because of the COVID-19 pandemic.

Seeing the video of the white Minneapolis police officer kneeling on Floyd’s neck as he said “I can’t breathe” as well as seeing the protests that were rippling across the nation, prompted Slack to action.

There have been so many incidents caught on video of police brutality against black men, but this one was “so different,” he said. “It struck a nerve in me. Something needed to be done.”

They contacted other local organizations that had put out on social media their plans for weekend protests. Most of them used the hashtag Black Lives Matter but were not led by black people, so Jackson urged them to line up and support the Fresno State NAACP student action, Jackson said.

“I was definitely worried (about COVID-19), especially for the elderly who were there.” — Fresno State alum Joshua Slack

Their forces grew, with student Ezra Cato overseeing a homemade security force of yellow-vested volunteers with walkie-talkies who spread out through the expanding crowd. The organizers also notified the city of Fresno and Fresno Police Department about the protest plans.

They had sought donations to pay for face masks and hand sanitizer, but those funds went unspent as donors dropped off large quantities of masks, hand sanitizer, water, and food, Jackson said.

The city of Fresno provided the platform for the speakers, she said.

Slack said the threat of the coronavirus was uppermost in their minds, so it was important to have equipment on hand to keep people safe.

“I was definitely worried, especially for the elderly who were there,” he said.

As part of the effort to keep people safe, Slack said, the organizers built in two moments of silence so that any altercations or other issues would be more readily observed.

It was during one of those moments that Jackson became fully aware of how many were in the crowd. As those in the front quieted, it took several minutes for sounds to gradually dissipate in the back, she said.

If there was any disappointment in Sunday’s event, Jackson said, it was how acting Fresno Police Chief Andy Hall conducted a news conference after the event without including march organizers, and in not stepping out to address marchers as they passed by police headquarters.

There is a need for more communication among the police, city of Fresno, and the community to start addressing the inequalities that will be the topic of future conversations, Jackson said.

She said they include the failure of Fresno Unified School District to properly educate black students, most of whom are not performing at grade level; the failure of Clovis Unified to offer more than a “pizza party” to students subjected to racism by fellow students in group chats; the lack of access to healthcare and clean water in west Fresno; and the city’s income inequality.

“This is going to be an ongoing project,” she said.

Surrounded by Fresno Police in Case of Mistaken Identity, ‘The Kid is Scared to Death’