In the Name of George Floyd, Thousands Protest in Downtown Fresno 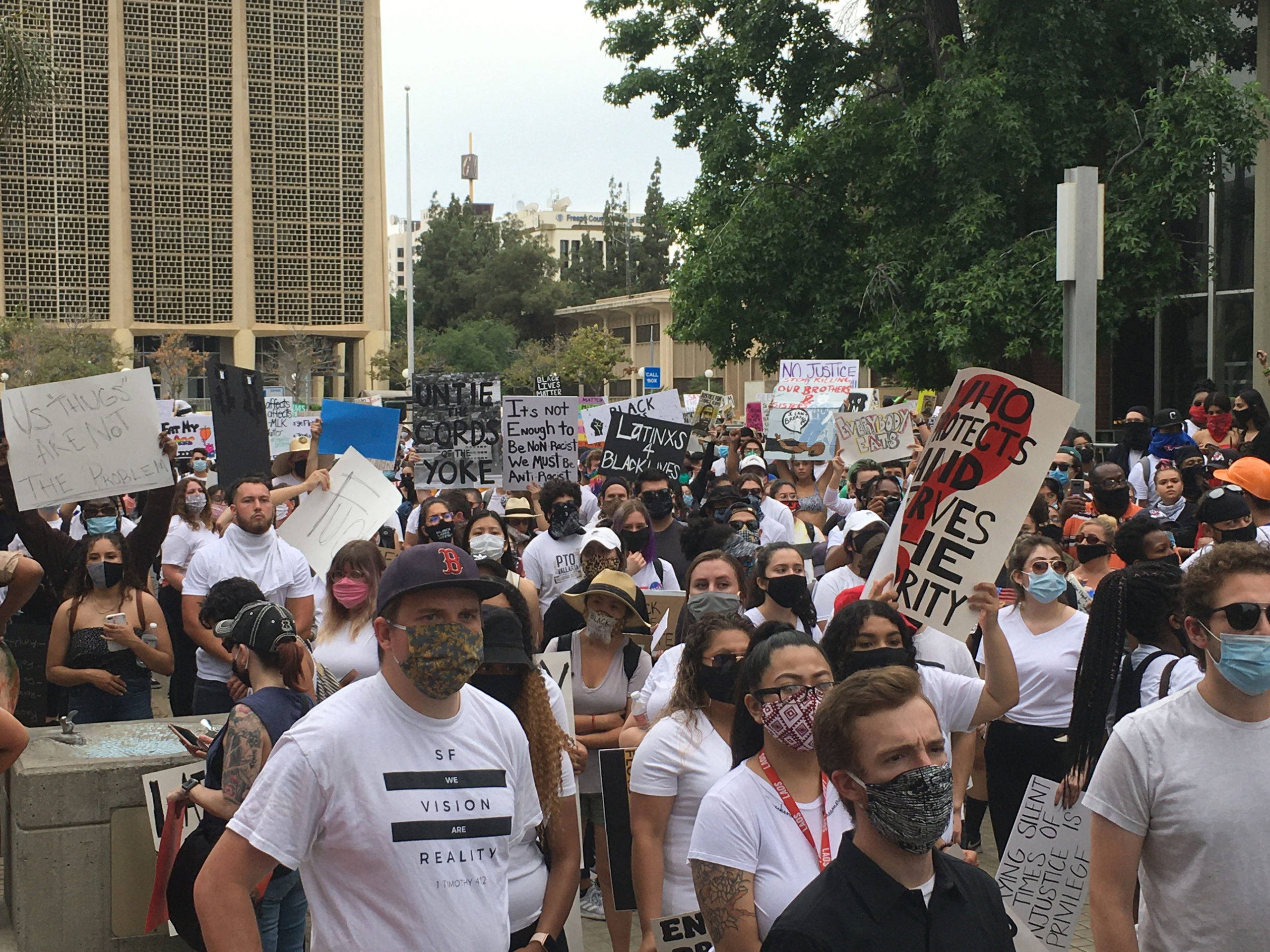 Thousands attended a protest rally in downtown Fresno for police justice and accountability after the death of George Floyd.

Many in the crowd, which skewed toward the 15-25 year old range, carried signs of “I can’t breathe” and other slogans of racial justice.

George’s death has sparked protests and looting in many American cities.

In Fresno there was anger, but the event was peaceful.

The protest was organized by the Fresno State NAACP chapter and led by its president, D’Aungillique Jackson.

She told the crowd that gathered for the 2 p.m. event at Fresno City Hall, that while there were other events in Fresno in Floyd’s memory, this was the only event organized by the black community.

Jackson told the audience time and again, this would be a peaceful event, led by black voices.

“We are not here to riot,” Jackson said. “We will not damage property owned by black people.”

While appreciating the support of whites, Jackson also emphasized that police injustice is a problem affecting communities of color the most.

“If you are an ally, you are here to amplify, not overstep,” Jackson said.

Pastor D.J. Criner, also a city planning commissioner, fired up the crowd with a rousing invocation. He talked about how Jesus fought for justice.

“We will say together we are tired of not breathing. We will breathe today,” Criner preached.

Other speakers talked about the names of African-Americans who have died at the hands of police. They want such tragedies to stop.

After an hour of speeches, the crowd marched to the police department headquarters, taking O Street to Fresno Street to M Street.

The Move for Black Equity

“This is amazing. And what’s even more amazing is the fact of how many non-people of color that’s out here. That’s huge. This is why I know that that George Floyd did not die in vain.” — Fresno businessman and speaker Chris Milton

Just like at City Hall, a podium and a speaker system was set up at the plaza in front of police headquarters. The building itself was surrounded by barricades. A number of police leaders came outside to observe the speeches.

The group demanded accountability for police officers accused of injustice. They want a community voice in picking the city’s next police chief. Current Chief Andy Hall is scheduled for mandatory retirement in April 2021.

Chris Milton, a Fresno-area businessman, talked to the crowd about the need for more black equity — the concept of blacks owning their own businesses and homes.

“The problem is we’re fighting.  We’re fighting the community. We’re fighting ourselves, but we don’t own nothing,” Milton said after his speech. “The whole thing is to re-channel our anger, and buy our communities. Put yourself in a position where your community is yours. If you own your community, you don’t need nobody to police it because you’re going to take care of it.”

The crowd then marched back to City Hall, this time using Tulare Street. After a few more speakers, the rally finished and the crowd dispersed.

The visible police presence was minimal. A lieutenant and chaplain were roaming around prior to the start of the event. Bicycle officers stayed at the perimeter of the crowd.

At a post-event news conference, Hall said all deputy chiefs and captains were working on Sunday.

Hall said he looks forward to speaking with groups to talk about the problems of policing in Fresno.

Jackson and her team put together the event in just a matter of days.

Her motivation was to prevent the Black Lives Matter mission from being co-opted by outside groups.

“To organize an event using Black Lives Matter and not having any black lives present to make the decision was something that really angered us, which is why we pushed through with this event,” Jackson said.

They received help from dozens of volunteers to provide water, snacks and masks; engage in crowd control; and provide First Aid if needed.

Fresno City Council president Miguel Arias was one of the volunteers, donning a bright yellow jacket.

A police commander praised Jackson and the Fresno State NAACP for such an organized and peaceful event.

Fresno police say they used flex scheduling to bring in more officers than a normal Sunday. Roads along Tulare and Fresno streets were closed to traffic, as well as O Street in front of City Hall.

The protest was the third in three days in Fresno, and by far the largest. The Unitarian Universalist Church held a vigil that drew hundreds Friday night. A hastily organized group marched from downtown Fresno to the Tower District Saturday night.

The Sunday crowd was large and peaceful.

“This is amazing. And what’s even more amazing is the fact of how many non-people of color that’s out here. That’s huge. This is why I know that that George Floyd did not die in vain,” Milton said.