MADERA — The estate of LeRoy A. Giannini has donated nearly $9 million to Valley Children’s, in honor of LeRoy’s parents, Ruth E. and LeRoy G. Giannini. This is the largest single estate gift in the organization’s history.

“This gift is a wonderful tribute to the family’s deep Valley roots, to their lifetime of caring for children and families, and to those children who we are privileged to care for at Valley Children’s today and for generations to come.”

For 124 years, the Giannini companies were farming giants in the Central Valley. LeRoy G. Giannini started farming at an early age on 20 acres. LeRoy was 16 when his father was killed in a train accident and, shortly after his high school graduation, he took over the family farming operation.

Under his innovative leadership and steady, hard work, the family business grew to more than 2,000 acres of nectarines and plums, along with a processing plant in Dinuba. At one time in the late 1970s, Giannini was the largest producer of nectarines in the world. Over the years, the family also raised cattle along the central coast. 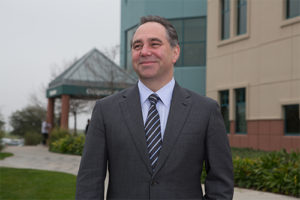 “This gift is a wonderful tribute to the family’s deep Valley roots, to their lifetime of caring for children and families, and to those children who we are privileged to care for at Valley Children’s today and for generations to come.” — Todd Suntrapak, president/CEO, Valley Children’s Healthcare

Giannini was as generous as he was private. Over the course of his lifetime, he made sizeable contributions to support educational and faith-based organizations in his community but his gifts were not widely publicized.

Mr. Jim Burnett, a longtime friend and employee of Giannini and the trustee to his estate, shared that, over the years, Giannini paid for every Little League team in Dinuba that did not have a sponsor. For his employees and their family members, he would pay for life’s unexpected emergencies, pay to send their children to college, and cover funeral expenses for every employee or family member.

In Burnett’s words, Giannini was a remarkably generous man who ran his business as a family.

A new outpatient center planned for construction on the Valley Children’s Hospital campus in Madera will be named in honor of the Giannini family to serve as a powerful tribute to their generosity.

“We are grateful for the generosity and vision of the Giannini family and the transformational effect that their gift will have at Valley Children’s,” said Robert Saroyan, president of Valley Children’s Healthcare Foundation.

“This gift is the capstone of the Giannini family’s incredible tradition of philanthropy in the Valley. Their spirit of generosity and compassion for those in need in our community will live on with the naming of the future center.”