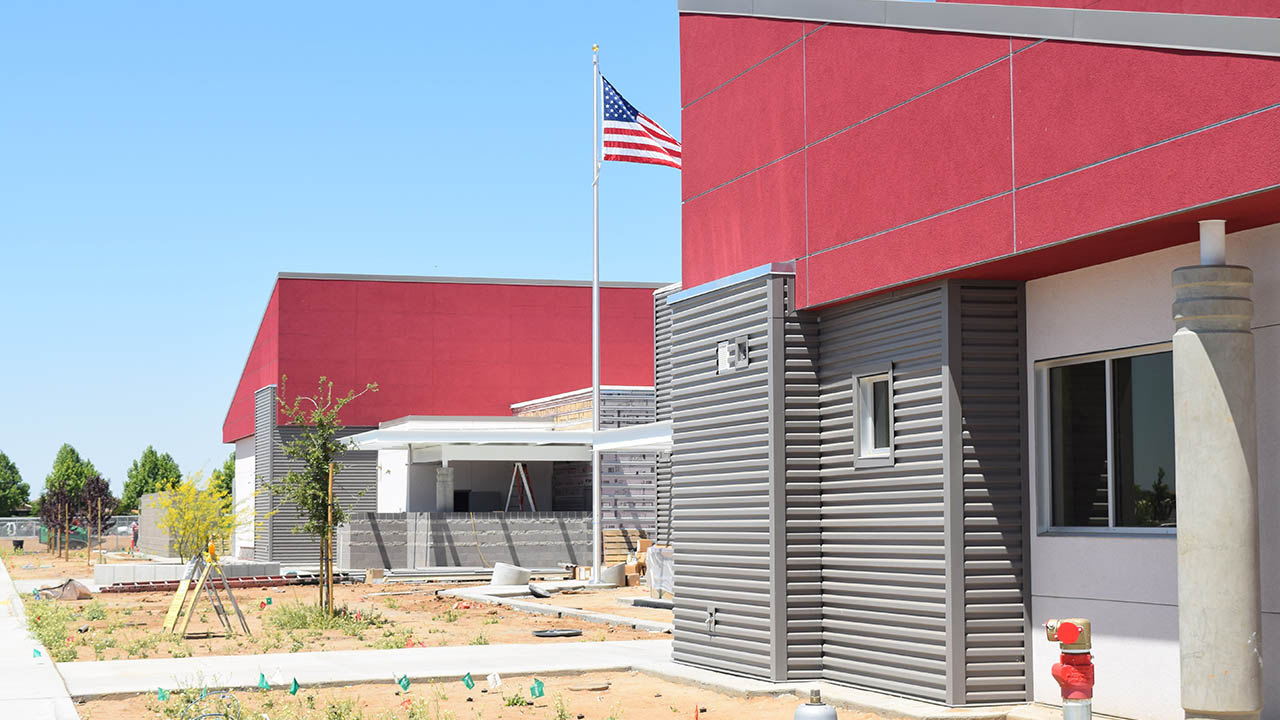 Principal Kacey Gibson has spent the past year overseeing construction of Clovis Unified’s newest elementary school, from the selection of a name (Janet L. Young Elementary), to the school mascot (the Jets), to the school colors (sky blue, crimson, silver, and white). 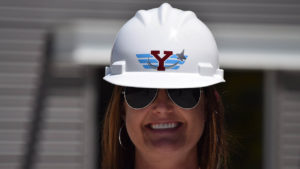 She’s watched walls rise for classrooms, the library, and offices, the planting of Bermuda grass on the playfield and drought-tolerant trees on the campus, the installation of playground equipment painted in the school’s colors.

When Gibson took on the job in February 2019 — at the time she was principal of Reagan Elementary — she was excited about building the school’s culture from the ground up, working with all the stakeholders.

She expected that the final months before the school’s opening in August would be a time of eager anticipation at the prospect of hundreds of students exploring their school for the first time, meeting their teachers, checking out the playground.

Opening a new school during a pandemic was not on her radar. 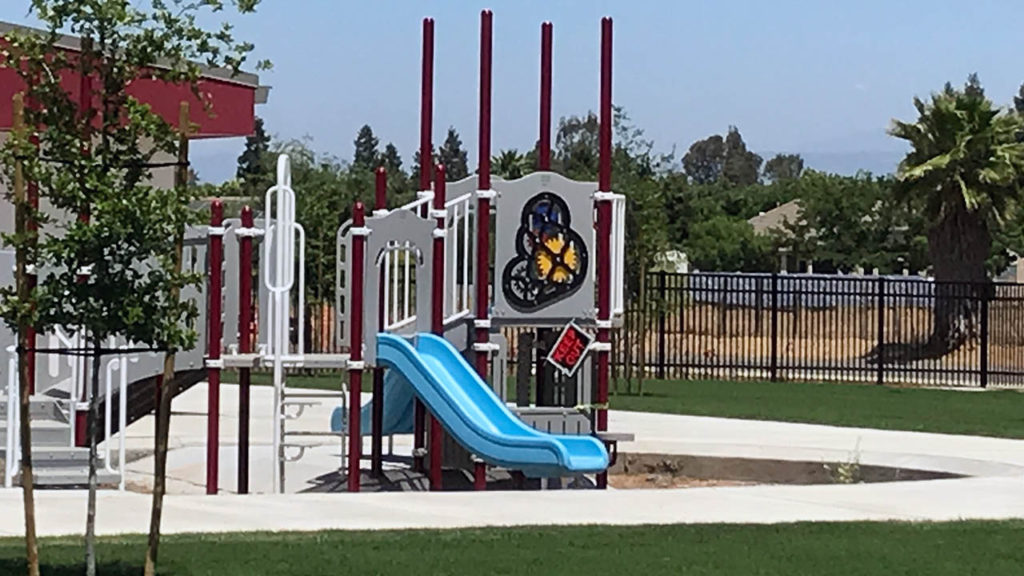 A play area awaits students who are expected to return in August. (GV Wire/Nancy Price)

And so there have been some necessary readjustments, such as canceling the March 31 “groundbreaking” ceremony to introduce the $30 million school and its new traditions. (Actual construction started months earlier.)

Invitations formatted like a boarding pass had been mailed out to hundreds of people, including school namesake Janet Young, a former Clovis Unified superintendent.

As the pandemic crept ever closer in late February and early March, Gibson started to have a sinking feeling that was confirmed with the mid-March announcement that schools would close and large-scale public events canceled to slow the spread of the highly contagious coronavirus. 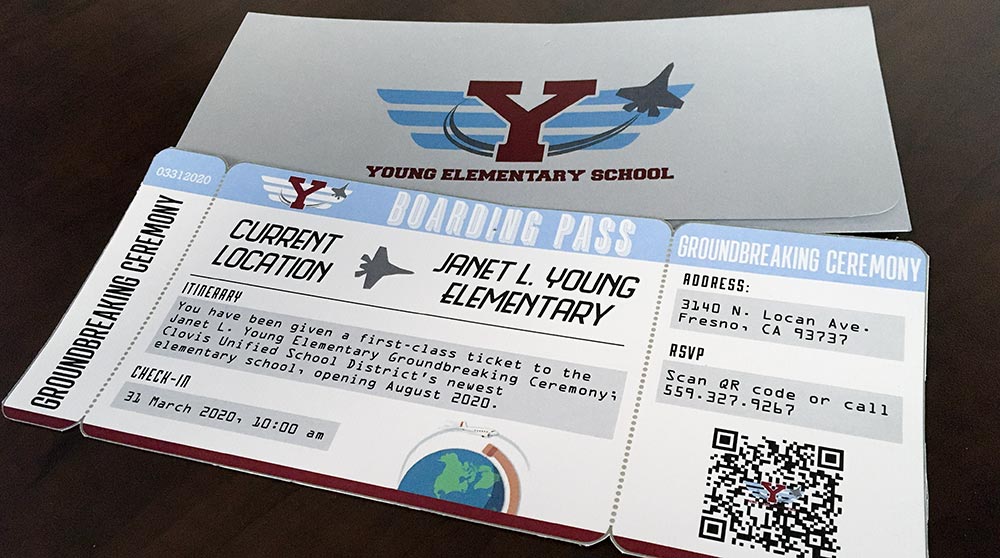 A “boarding pass” to the school’s groundbreaking ceremony, which was canceled. The school mascot is “Jets.” (GV Wire/Nancy Price)

Construction work on the school was deemed essential and was able to continue after the state issued a stay-at-home order.

Young Elementary is in unincorporated Fresno County — the school is surrounded on two sides by an orchard and farm field — and was not affected by the city of Fresno’s order requiring face masks.

Gibson now conducts most of her meetings by Zoom teleconference as she oversees the school’s completion.

Her next meeting with parents, “Talk with Mrs. Gibson,” is scheduled for 6 p.m. Thursday.

Her new teachers, most of them veterans of Clovis Unified and other districts, have taken small-group tours with her so they can see where they’ll work come fall and get a mental picture of how they may arrange their classrooms.

The furniture hasn’t arrived yet, but the classrooms are already equipped with an overhead projector and “smart” board,” and docking stations for classroom laptops or tablets have been installed.

The hallways have been painted in the school’s colors with inspirational messages such as “Ready, Jet, Go!” and “Let Your Dreams Take Flight — Never Give Up.”

Jets were chosen as the mascot in part because the school is on the flight path for the California Air National Guard jets that take off from Fresno-Yosemite International Airport.

The school is built to hold as many as 800 students, and about 550 are expected when Young Elementary opens.

The hallways have been painted in the school’s colors with inspirational messages such as “Ready, Jet, Go!” and “Let Your Dreams Take Flight — Never Give Up.”

But Gibson acknowledges that’s contingent on health advisories at the time, and also on the willingness of parents to send their kids to school in the first place.

Instead of a groundbreaking, she’s now planning for a grand opening ceremony.

In addition, she wants to schedule “preflight events” for students and their parents to visit the school, once grade at a time. Students can see the layout and learn about the important stuff such as, where’s the playground and the bathrooms? Meanwhile, parents will get the chance to meet other parents. 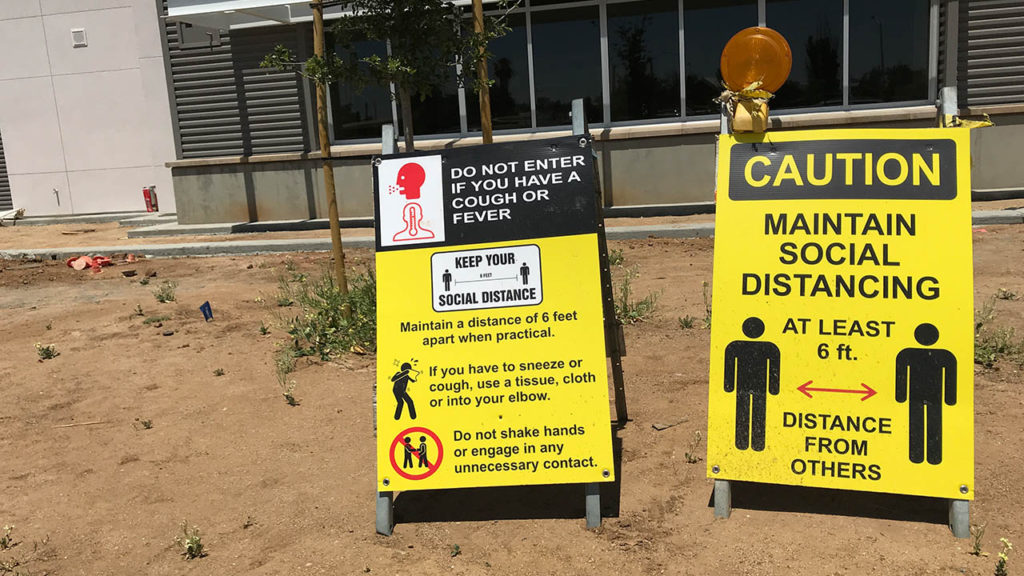 Maintaining social distancing won’t be easy in a classroom measuring 960 square feet, but Gibson is considering organizing students in small groups within classrooms or putting up awnings outside for outdoor classes.

For some families, it will be their third elementary in only a few years. The rapidly growing southeast portion of the district has led to the construction of new schools. Some families who transferred into Boris Elementary when it opened four years ago will now move to Young Elementary, Gibson said.

Eighty percent of the Young students are coming from Boris, and the remainder from the Reagan and Freedom elementary schools.

But it will feel somewhat familiar since Young is built on the same design as Boris, she said.

Knowing that many of those students are coming to a new school, leaving behind friends and teachers who they were abruptly separated from with the mid-March closures, will make this new school opening and first day of school vastly different, Gibson said.

She wants to provide those students with the opportunity to say goodbye so they can have closure and be ready to move on to making connections with new friends, teachers, and their new school.