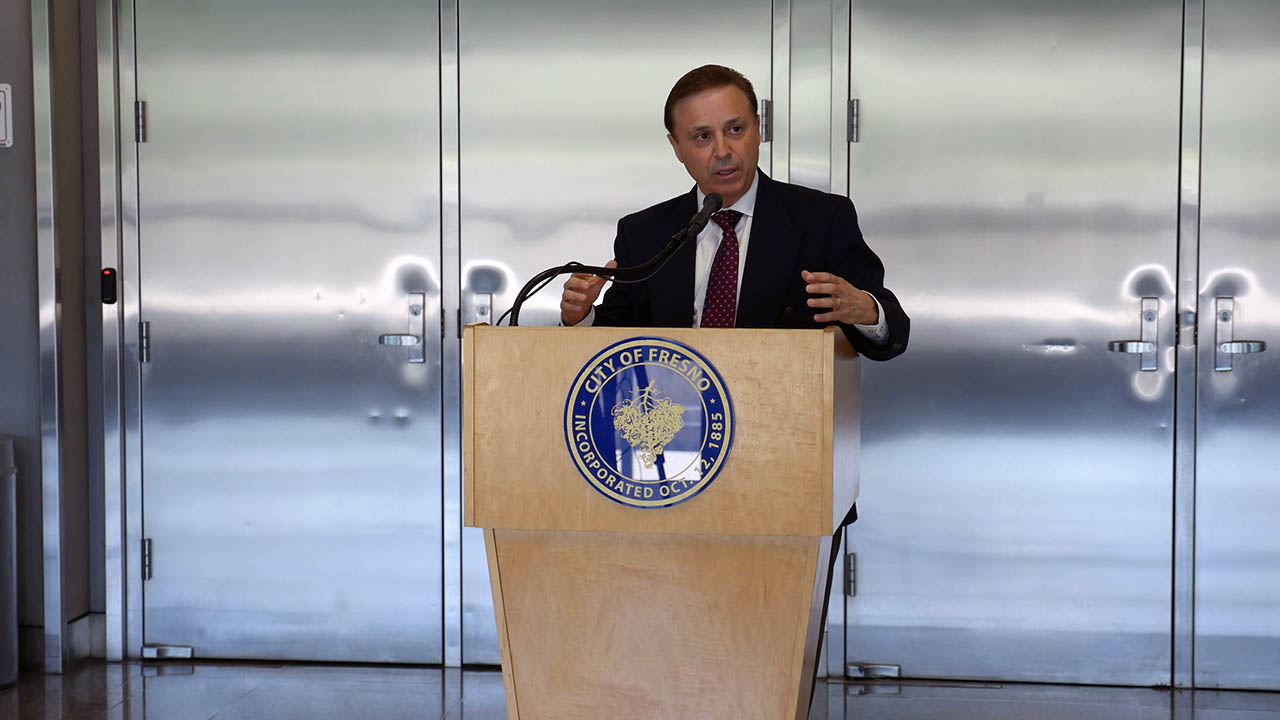 None of the other six councilmembers attended Bredefeld’s afternoon news conference at City Hall.

“We’ve seen tremendous anger and frustration across our city. This is what it’s about,” Bredefeld said. “It’s about our citizens that we represent, people who just want to go back to work, make a living, put food on the table.”

Will There Be Support Among Council?

“I’m opposed to repealing the current order. To the best of my knowledge, there’s been no significant change in public health indicators to support such a proposal.” — councilmember Nelson Esparza

Said councilman Nelson Esparza: “I’m opposed to repealing the current order. To the best of my knowledge, there’s been no significant change in public health indicators to support such a proposal.”

However, councilman Mike Karbassi said he would evaluate Bredefeld’s idea.

“I believe the city and county are working on a joint plan, and I’m awaiting the results of their negotiations,” Karbassi said. “I’m interested in a joint approach but will look closely at Bredefeld’s plan and its implications. I’m interested in easing restrictions for small businesses so they’re on a level playing field with big businesses.”

Mayor Lee Brand declared an emergency on March 16, with a shelter-in-place order effective March 19. The state also issued a similar order on March 19.

The city has extended the shelter order several times, now through May 31. The city has eased some of its restrictions for businesses, allowing retail stores to offer curbside pickup or, for lower traffic shops, in-store customers with limits.

Lifting city orders would remove things like mandatory mask-wearing while shopping, reopen City Hall to the public, and ease limits on accessing parks.

“If logic and common sense and caring about citizens getting back to work rules the day, (the council) will do the right thing and rescind all these executive orders,” Bredefeld said. “If we don’t eradicate the shelter in place for the city, it’s going to be a problem in terms of getting (a reopening plan) approved with the governor.”

Bredefeld: Protesters Should Have Never Gone to Arias’ Residence

Bredefeld addressed the incident Tuesday night in which council president Miguel Arias was cited for misdemeanor battery after being confronted by conservative activist Ben Bergquam and others at Arias’ downtown Fresno apartment.

“We can have different points of view, but it completely crosses the line of safety, decency, respect of personal and family boundaries. When somebody shows up at the door of an elected official. It should never happen,” Bredefeld said.

“If people like Ben Bergquam or the 300 people (at the Fresno Freedom Rally) support my belief that people should be free to go back to work, I welcome that. When they do things like they did yesterday, that is completely unacceptable. I denounce it.” — councilmember Garry Bredefeld

The Waffle Shop, a northwest Fresno restaurant, opened for dining, breaking the city’s shelter-in-place orders and receiving two citations that could potentially result in $6,000 in fines. The restaurant has since returned to serving takeout meals only.

Bredefeld said there is a difference between Bergquam’s support for his policies and Bergquam’s behavior Tuesday night.

“If people like Ben Bergquam or the 300 people (at the Fresno Freedom Rally) support my belief that people should be free to go back to work, I welcome that,” Bredefeld said. “When they do things like they did yesterday, that is completely unacceptable. I denounce it.”

The two other men involved in the tussle with Arias, Jason Phillips and Josh Fulfer, attempted to attend Bredefeld’s news conference Wednesday but were turned away by City Hall security because they weren’t on the approved media list.

Arias Has More to Say About Defending His Family From Bergquam