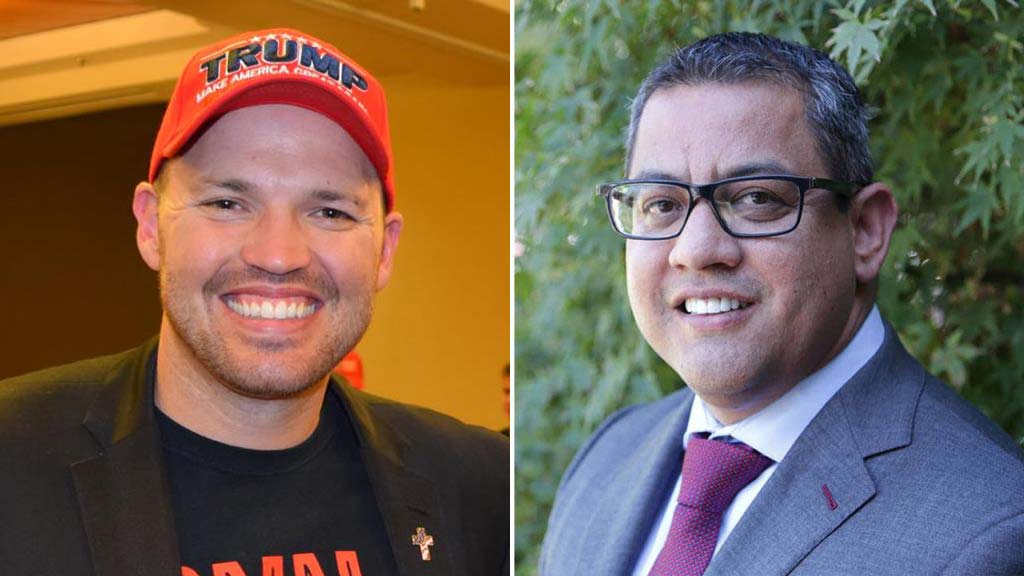 The video also shows Arias pushing a man accompanying Bergquam, who is attempting to question Arias about COVID-19 business restrictions on the stairs outside his downtown Fresno apartment.

Arias said he was calling Fresno police at one point during the dust-up.

Following the incident, Arias received three misdemeanor battery citations. Arias said he planned to use online threats made against him as his legal defense.

Arias said Tuesday evening after the incident that by coming to his home, Bergquam “crossed the line.”

“They came to my home, where my kids were taking a nap on the couch. It was clear to me a mob mentality was taking place, and I am not going to allow it.” — Miguel Arias

He said the video didn’t convey the reality of the situation: 10 to 15 protesters “shouting demands” and refusing to leave after he declined Bergquam’s request for an interview.

“They came to my home, where my kids were taking a nap on the couch,” Arias said. “It was clear to me a mob mentality was taking place, and I am not going to allow it.”

Arias described Bergquam as “a paid activist who got what he wanted — a viral video.”

The councilman said his pushing of a man accompanying Bergquam “was a reaction to him putting his hands on me.”

Going through his mind the whole time, Arias said, was “these are folks who have made threats in the past and are very vocal supporters of the Second Amendment and could potentially have been carrying concealed weapons.”

Asked how city leaders might calm the nerves of residents worrying about the pandemic and its devastating effects on local businesses, Arias said, “Just realize that we’re all trying to do the best we can to move our city forward.”

Arias also said that the people responsible for radio ads critical of how Arias and Mayor Lee Brand have led the response to COVID-19 are whipping some people into a dangerous frenzy.

“Right now, there is risk of physical attacks on us and our families,” Arias said.

Arias said that police officers were sent to the residences of all councilmembers and the mayor following the incident.

Mayor Talked to Protesters Outside His Home

Brand’s spokesman issued a statement at 8:22 p.m. Tuesday saying the mayor had a “peaceful discussion” with a group of people protesting shelter-in-place orders.

“A group of 20-25 people protesting the City’s shelter in place orders came to my house this evening,” Brand said. “When they arrived, I went out to answer their questions and we had a peaceful discussion on my sidewalk. After 10 minutes, they left and I went back inside. I’m willing to talk with anybody who wants to have a civil conversation about the best way to keep our city safe and healthy.”

Councilman Garry Bredefeld, a vehement critic of Brand and Arias, took to Facebook to voice his feelings after the confrontation.

“We’ve just been informed that protesters went to Council President Miguel Arias’s house — I can’t even begin to express the outrage I feel regarding this incident,” Bredefeld said in the Facebook post. “This is completely unacceptable and should never happen. While we can have disagreements politically and express different points of view, it completely crosses the line of safety, decency, and respect of personal and family boundaries. If any crimes were committed by these individuals, they should be prosecuted to the full extent of the law. This disturbing and outrageous incident must never, ever happen again!”