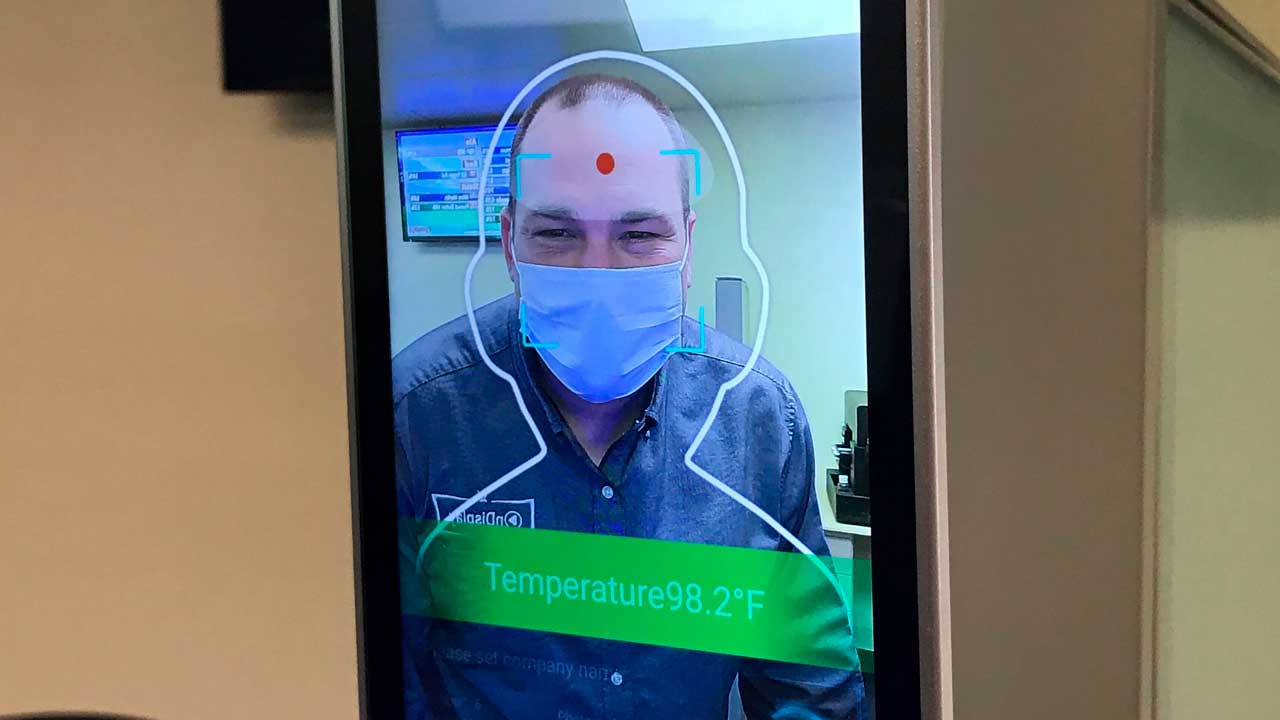 Self-serve kiosks are used for any number of things. But, this new generation can read your temperature, tell if you’re wearing a face mask, and even clock employees in and out for work.

“OnDisplay,” which is based in northwest Fresno, is fielding calls for these contact-free devices from across the country.

“We were able to transition into this product very quickly because we’d already developed so much source for managing remote devices. And, with a little bit of tweaking, we’re able to debut this very fast.” — Robert Morris, talking about SafeScan

The software company still makes menus for restaurants, but management knew it had the means to create a product that could help those restaurants reopen in a pandemic world.

The ‘”SafeScan” device looks like an iPhone on a stand. And, it knows more about you than you do.

It takes your temperature when you look into it. It assigns “pass” or “fail” on wearing a mask. The system is programmed to alert a manager or other designated person when somebody has a high temperature or is without a face covering.

They’re flying out the door as soon as they are manufactured, company officials said.

“We’re getting quite a few phone calls, so you know can assume that there’s not a lot of competition right now for sure,” says Robert Morris, one of the company’s managing partners.

It was just a few weeks ago when the first unit was assembled.

“We were able to transition into this product very quickly because we’d already developed so much source for managing remote devices,” Morris said. “And, with a little bit of tweaking, we’re able to debut this very fast.”

When GV Wire pressed Morris as to how many units have been ordered he didn’t want to give us an exact number: “We’re getting quite a few phone calls. Quite a huge volume.”

The price tag is $3,200 each. That comes with a stand, one year of remote support, cloud management software and, for many businesses trying to open, peace of mind.

Morris revealed a few of the Valley businesses that have purchased SafeScans:

There are many other orders going out as soon as the machines can be built.

“It is taking off and they’ve got units coming in right now for those orders. We do have a 10 day lead time right now just because demand has been pretty high,” said Morris.

“It scans your customers and employees, and takes your temperature at the same time,” Sakura Chaya General Manager David Wong told  GV Wire by phone. He says those are among the reasons he bought two of the scanners for his Fresno and Clovis locations. He’s hoping to open soon, and this will give him added peace of mind when it happens.

“When (employees) clock out, it also checks their temperature, and keep tracks of their time and attendance.” — David Wong, GM of Sakura Chaya restaurants

“It’ll mention, please wear a mask to your employees before they clock in and take your temperature,” says Wong. “When they clock out, it also checks their temperature, and keep tracks of their time and attendance.”

“There are all kinds of things that that can be done for privacy concerns,” Morris said. “Rest assured that this isn’t connected to any other type of database or anything like that. It’s just literally so that that corporations or businesses can track how many people are scanned and making sure that everyone’s healthy and safe.”

Morris explained that the images are stored in a “‘hash.” That’s is a place where things are not saved into a database.

Other features include the ability for the device to only report temperature readings with a random ID number.

Coming to a Movie Theater Near You

Wired.com reported Wednesday that temperature screenings are already in use at Texas movie theaters.

“A few film houses in Austin and San Antonio have been among the first to open their doors, but what people found on the other side may not have been what they were expecting,” Wired’s culture news roundup stated. “Airport-security-style check-ins, where patrons will be given an infrared temperature screening and asked if anyone in their household has had symptoms in the last two weeks.”

Related Topics:COVID-19SafeScantemperature screenings
Up Next

Newsom to Reveal Guidelines for Reopening