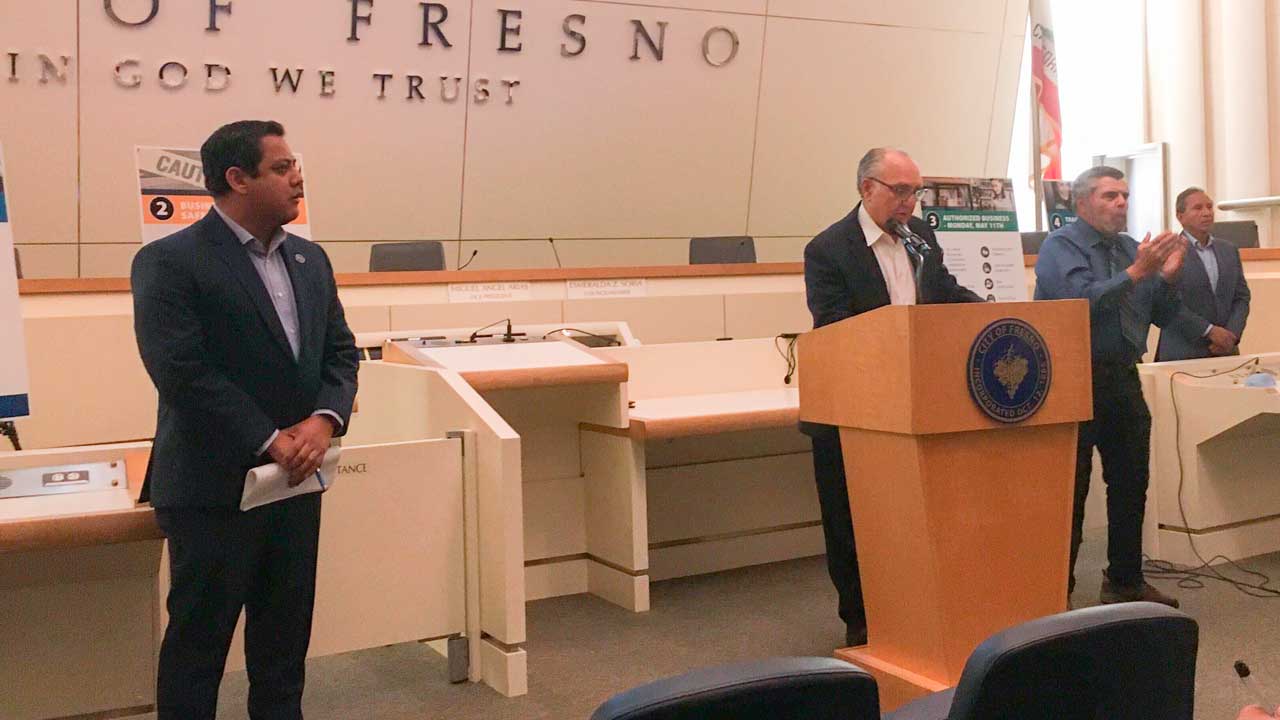 Fresno will begin to reopen its economy on Monday, May 11, Mayor Lee Brand announced Tuesday.

Brand made the announcement at City Hall after telling city council members of his plans in an emergency closed session meeting an hour before.

Nearly all businesses, except for dine-in restaurants, salon/barbershops, and entertainment venues will be allowed to reopen with modified physical distancing.

“We want to protect people and get people back to work as quickly as we can,” Brand said. “We will continue to adjust as we go forward.

“This is the right decision for Fresno at this stage of the pandemic, and I’m thankful to have the assistance of many very smart, caring, and dedicated people who want the best for everyone in terms of public health and economic security.”

Businesses That Will Be Allowed to Reopen

Here is a list of businesses that are eligible to reopen their doors next Monday:

Other Businesses Can Sell Online

All other retail businesses may conduct online sales with contactless curbside pick-up or delivery. There is no application process for these businesses to reopen, city officials said.

“Right now, all retailers can do online sales with curbside delivery,” Brand said.

Nonessential businesses have been closed since the city’s and state’s shelter-in-place orders took effect on March 19.

Last Friday, Brand extended the order for the third time through May 31. At the same time, he announced a plan to allow “low-risk” businesses to reopen.

“As soon as the state gives us the green light to open restaurant dining rooms, gyms, hair and nail salons, and other close-contact businesses, then I will devote the resources of the city to get those very deserving and hard-working people back to work.” — Fresno Mayor Lee Brand

On that same day that Brand extended the shelter-in-place order, Fresno Mayor-elect Jerry Dyer said his goal was to have “hundreds” businesses reopened by this Thursday.

“Hundreds of businesses will be allowed to reopen, and we will provide much-needed hope for people,” Dyer said in his remarks following Brand’s Tuesday announcement.

“Today is a positive step toward our future.”

Dyer said that videos are being made in multiple languages so that business owners know specifically what they can — and can’t — do.

In recent days, the city announced that pet groomers, golf courses, and medical/dental offices could reopen.

Arias: ‘Not a Time to Celebrate’

“We still have a lot of work to do,” Arias said, citing the need for residents to continue to adhere to the state’s shelter-at-home order and follow the city’s public face-mask requirement.

“It’s not a time to celebrate” with parties and large gatherings, Arias said.

Arias said that City Hall will trust businesses to do the right thing, but code enforcement will continue to check to see that the rules are being followed.

The council president said that thus far, 16 fines totaling $20,000 have been issued for businesses violating the city’s shelter-in-place orders. Arias noted that code enforcement officers warn businesses and try to guide them on corrective actions before a citation is written.

Why Not Barbershops, Dine-in Restaurants, Too?

Brand said that the city is awaiting the go-ahead from the state before it further expands the economy’s reopening.

“As soon as the state gives us the green light to open restaurant dining rooms, gyms, hair and nail salons, and other close-contact businesses, then I will devote the resources of the city to get those very deserving and hard-working people back to work,” Brand said.

Some businesses will have additional requirements that include special sanitation and cleaning protocols.

The state’s relaxed rules coming later this week do not apply to restaurants, which have been limited to takeout, offices, shopping malls, or schools. Unknown is whether the state could — or would — act against communities that charting a different direction.

A key element for reopening is creating a statewide tracing system to determine if a person who becomes infected has spread the virus. On Monday, Newsom announced a new training program for thousands of people who will be used as contact tracers.

California has more than 56,700 confirmed coronavirus cases and nearly 2,300 deaths.

Too Late for Brewery

“Like many small businesses, we have struggled with a significant loss of revenue during this unprecedented time,” the brewery said on Facebook. “In the age of social distancing, anticipated future crowd limitations, and no immediate guidance on re-opening of Fresno’s restaurants or breweries we have made the difficult decision to close our Tower location.”