Every day that Californians heed official exhortations to remain in semi-isolation reduces the spread of coronavirus infections and, therefore, deaths from COVID-19, and will hasten the day that social and economic restrictions can be eased.

That’s the message that Gov. Gavin Newsom sent to Californians last week in laying out a “framework” of six conditions that must be met before he would restore a “semblance of normality.”

There is, however, another side of Newsom’s equation. Every day the restrictions remain in place, our personal and collective economic health deteriorates and our human frustrations about forced inactivity increase, especially as warm spring weather beckons.

We Americans, and we Californians particularly, relish personal freedom to, as the Hippie-era slogan says, “do our own thing.” Unlike citizens of other countries who may be accustomed to complying with authoritarian commands, such as those in China, we naturally bridle when told we must do things we don’t want to do. In fact, we fought a revolutionary war to separate ourselves from a king who governed by decree and establish the principle of inalienable individual rights to live our lives as we see fit.

So Far, Californians Have Pretty Much Complied With the Restrictive Orders

We aren’t doing our own things now, whether it’s earning money for ourselves and our families, cruising shopping malls, working out at gyms, going to the movies, learning in classrooms, attending sports events, visiting parks, or countless other personal choices that comprised our daily lives before the virus changed everything.

So far, Californians have pretty much complied with the restrictive orders and authorities, from the governor down, have wisely relied on voluntary compliance rather than coercive force, while promising, as Newsom said, “it will not be a permanent state.”

However, authorities in some other states have been heavy-handed in making and enforcing their decrees.

Michigan Gov. Gretchen Whitmer, for instance, declared that “All public and private gatherings of any size are prohibited,” which is being interpreted as not allowing even visiting one’s next door neighbors. She also forbids grocery stores from selling any item not deemed to be essential and is now seeing organized demonstrations against her decrees. 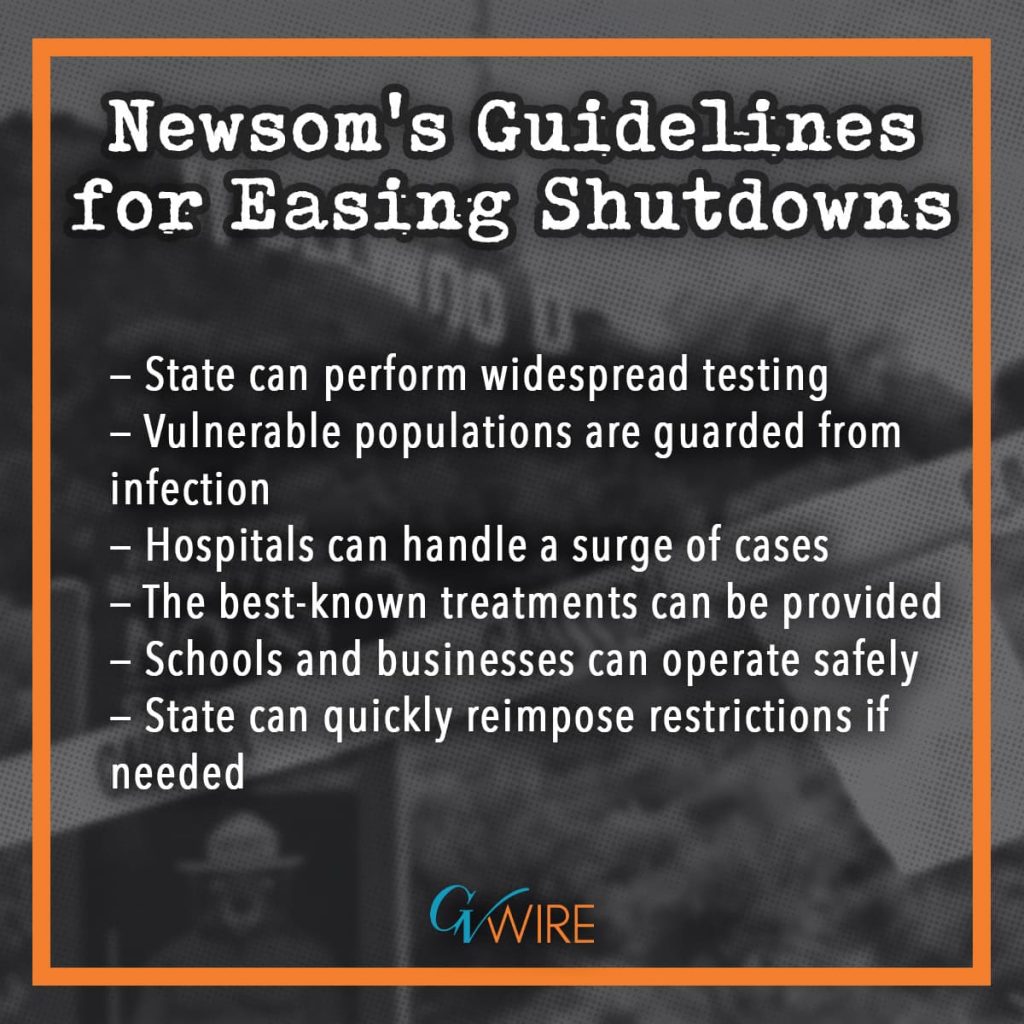 Newsom Once Hinted, Carelessly, That He Was Prepared to Declare Martial Law

California officials have cracked down on churches that continued indoor services, because such gatherings have created clusters of infection. But in Kentucky, a mayor even prohibited churches from having services in which worshipers remained in their cars and listened to sermons on their car radios.

How long will Californians continue to comply with social distancing and economic restrictions voluntarily? And if they chafe at the limits on their personal freedoms and begin to ignore them, will Newsom and other authorities use police, courts or even soldiers to enforce the orders?

Newsom once hinted, carelessly, that he was prepared to declare martial law and have the National Guard enforce virus-dampening restrictions if needed. He quickly backed off and having now declared that he sees “light at the end of the tunnel” and a day when restrictions can be eased, clearly hopes that voluntary compliance will prevail.

It’s somewhat analogous to our experiments with prohibiting liquor sales a century ago, the decades of trying to suppress marijuana before it was legalized in many states or even highway speed limits. When Americans confront restrictions on their personal conduct, they often rebel.

It’s a race between our hopes to tame the pandemic and our desires to throw off behavioral shackles and no one can predict what the outcome will be, or when it will arrive. We are truly traversing unexplored territory.