Gas prices are falling in the Fresno area, dipping below $2 per gallon at one local station.

The cheap gas is the result of a drop in demand because of COVID-19 stay-at-home orders as well as lower oil prices on the world market, experts say.

Price Below $2 Spotted in Fresno 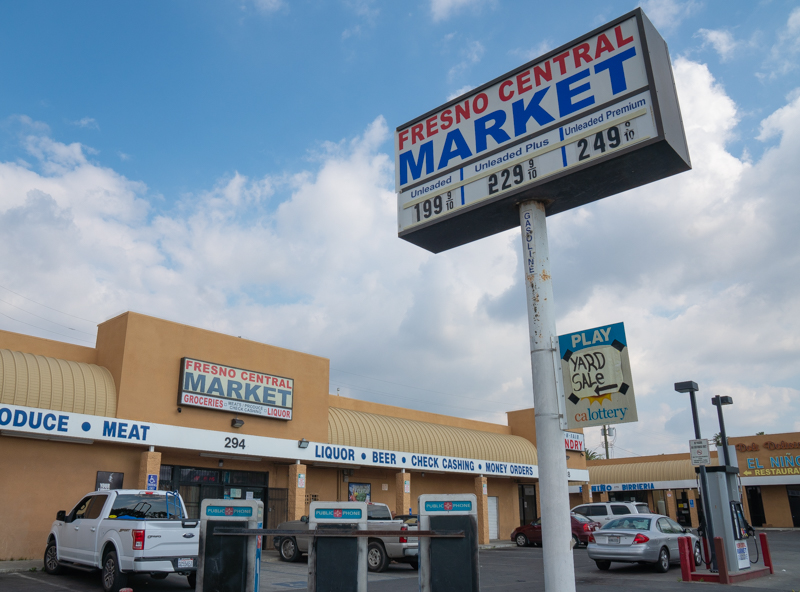 Fresno Central Market was selling regular unleaded for $1.99 on Sunday. It was the lowest price in the Fresno area, according to online price tracker GasBuddy. (GV Wire/Randy Reed)

Prices at local Costco gas stations were listed on the site at $2.09, a price matched by a small number of other retailers. GasBuddy showed the average price of regular unleaded in Fresno at just above $2.50 this weekend.

The price was significantly lower in other parts of the country. A Twitter user in Red Wing, MN posted a picture Friday showing gas at 89 cents per gallon.

Nationally, the average price for regular fell 14 cents over the past two weeks to $2.01 per gallon, according to industry analyst Trilby Lundberg of the Lundberg Survey. Over the past seven weeks, gas prices have dropped 52 cents, Lundberg said.

How long the era of cheap gas will continue remains to be seen. On Sunday, OPEC, along with Russia and other international oil producers finalized an unprecedented production cut of nearly 10 million barrels a day, as they try to end a month-long price war and boost prices.

The oil price cut is scheduled to go into effect May 1, and the deal is already having an effect on the price of crude.

But GasBuddy senior analyst Patrick DeHamm, says low prices at the pump will continue. In a Twitter post Sunday, DeHamm warned skeptics, “don’t be fooled! #Gasprices are NOT going to magically surge from this.”

OPEC+ agrees to a cut, but don’t be fooled! #Gasprices are NOT going to magically surge from this. Demand still lowest in decades, and a lot of skepticism with this deal and compliance based on the contentious environment around this deal. Oil up just 7 cents per barrel tonight.

“I’m pretty sure these wholesale prices and spot prices are as low as anything we’ve seen since before the Arab oil embargo” in the early 1970s, said Tom Kloza, head of global energy analysis at Oil Price Information Services, in a CNBC interview on Wednesday.

“I think you are going to see much more common sub-$1 gasoline prices in the nation’s midsection, and I think we are looking at a national average of $1.25 to $1.50″ at the pump,” Kloza said.