Chavez Proposes Warning, Fines for Not Sheltering in Place 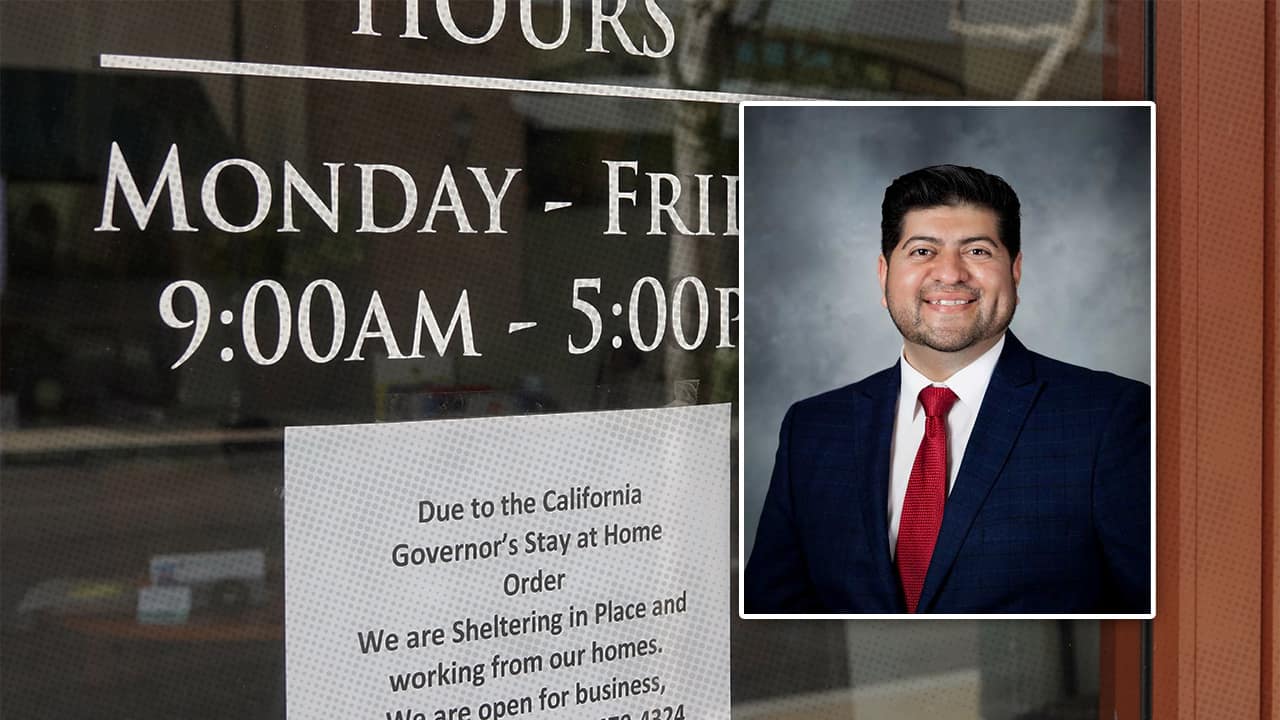 It’s all in the name of public safety during the COVID-19 pandemic.

“The whole purpose of this … is to minimize person-to-person contact and reduce the spread of this coronavirus that is really inflicting a lot of pain in our community and minimize the amount of patients that are going to be seen in the emergency rooms,” Chavez said.

“The city is not going to be criminally prosecuting people. These will be citations that people will be issued for not abiding by the CDC guidelines.” — Councilman Luis Chavez

While a draft version of the ordinance currently includes a penalty of six months in jail, Chavez said that might change.

“I want to make something very clear. The city is not going to be criminally prosecuting people. These will be citations that people will be issued for not abiding by the CDC guidelines,” Chavez said.

According to a draft proposal, the ordinance would ban any non-essential gathering of 10 or more people. It would not apply to the gatherings of a single household.

People using outdoor spaces and essential businesses that remain open are to use “reasonable” measures to maintain social distancing of at least six feet.

While Chavez says the measure is temporary and lasts to the end of the month, there is no specific sunset in the ordinance language.

“I started thinking about how can we prevent these irresponsible folks from doing this. So the idea came about of having code enforcement really look at providing these people, first of all, a warning. Second of all, an actual ticket,” Chavez said.

Chavez added that complaint calls have slowed down since he first floated the idea last week. 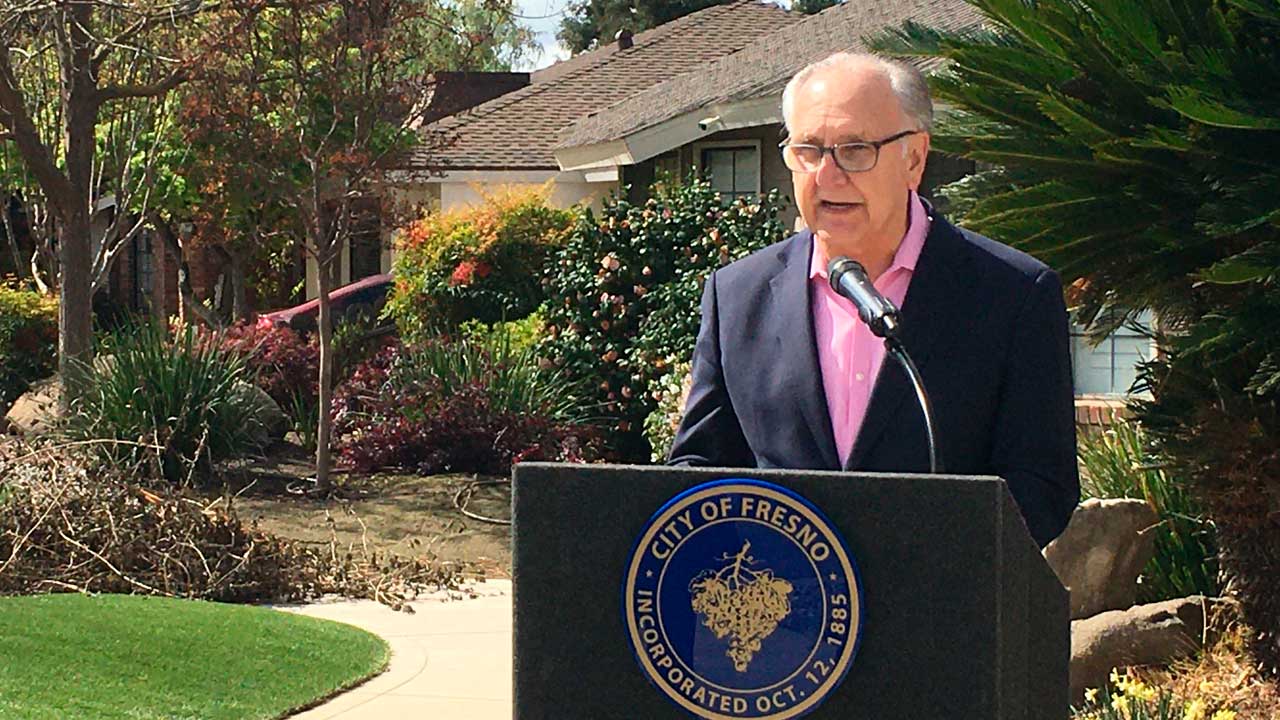 Fresno Mayor Lee Brand announces the extension of the city’s social distancing and shelter-in-place order March 26, 2020, at a news conference in front of his home. The mayor says he’s leading by example by following the city’s and the state’s orders. (GV Wire File)

“There is some pretty strong evidence that it is going to be unconstitutional.” — Attorney Mark Meuser

Mark Meuser, a constitutional and election attorney, as well as a former candidate for secretary of state, expressed doubt whether such an ordinance would withstand Constitutional scrutiny.

He cited an early 20th-century court case ruling against a mass quarantine in San Francisco, and believes the same could apply to Fresno’s proposed ordinance.

“There is some pretty strong evidence that it is going to be unconstitutional,” Meuser said. “The courts haven’t dealt with it quite to the degree that they have on the quarantine issue. But there is a pretty good constitutional argument when it comes to your right of association, a right of assembly.”

Chavez said he understands the concerns.

“It’s balancing personal liberties and personal rights with the collective rights of people to be healthy. That’s always been the balance for our society. But again, this is temporary,” Chavez said. “Yes, we have civil liberties and, yes, those personal rights should be respected. But right now, it’s a state of emergency … it requires an unprecedented response from local government.”

Chavez says that code enforcement officers, not police officers, would be the main enforcers of the ordinance.

“We’re not going to be sending SWAT, booking them into jail, but they are going to get fined,” Chavez said.

Chavez accepted the fact that such an ordinance might lead to a neighbor calling code enforcement.

“It’s already happening,” Chavez said. “Is this law intentionally going to cover 100 percent of everybody? No, but I think it will send a strong message that this type of behavior is not acceptable and there’s going to be a consequence to that action.”

Councilman Garry Bredefeld, the city representative for northeast Fresno, also expressed concerns about turning neighbors into “snitches” in a Tweet regarding a similar situation in Los Angeles.

People Not Getting the Message

Chavez said there could be several reasons why people aren’t getting the message — from aloofness to culture or language.

But, nonetheless, people should know what’s going on.

“(If you don’t know), then you’ve been living under a rock. To me, that’s just not an excuse to not participate. We can’t control a lot of these things,” Chavez said. “But here’s the one thing we can absolutely control, and that’s our ability to stay home, to shelter in place, to be responsible and to not, infect other people.”

The city was about to enact a voluntary shelter-in-place order to take place March 19. That was supplanted by a statewide mandatory order announced hours later.

The state order has many exceptions allowing for travel to grocery shop, medical appointments, and other essential services. But, socially distancing requirements are in place such as maintaining a six-foot distance and no public gatherings of more than 10 people.

The city has shut down many businesses as non-essential. While city parks are open, playgrounds and parking lots are closed off.

Chavez’s emergency ordinance is not on the agenda of Thursday’s regularly scheduled meeting. However, a special or emergency meeting can be called on short notice to discuss the issue.

Here is a draft proposal. It could still change when it is presented on Thursday.

Fresno County Has 100 to 150 Ventilators. Is That Enough After Third Death?