The White House is considering coronavirus “war bonds” to fund the federal response to the pandemic.

Larry Kudlow, the director of the national economic council, says the federal government, like most Americans, should make the most of low interest rates.

The U.S. government has had little trouble finding people willing to lend it money so far, even without anything branded as “war bonds.” It’s been able to borrow at interest rates near record lows despite ballooning deficits, as investors around the world look for safe places to park cash.

Japanese Prime Minister Shinzo Abe is preparing to announce a 108 trillion yen ($1 trillion) economic package to help the country weather the coronavirus crisis. Abe said Monday he plans to disclose details of the package as early as Tuesday.

Abe is expected to announce a state of emergency Tuesday, at least for cities like Tokyo. 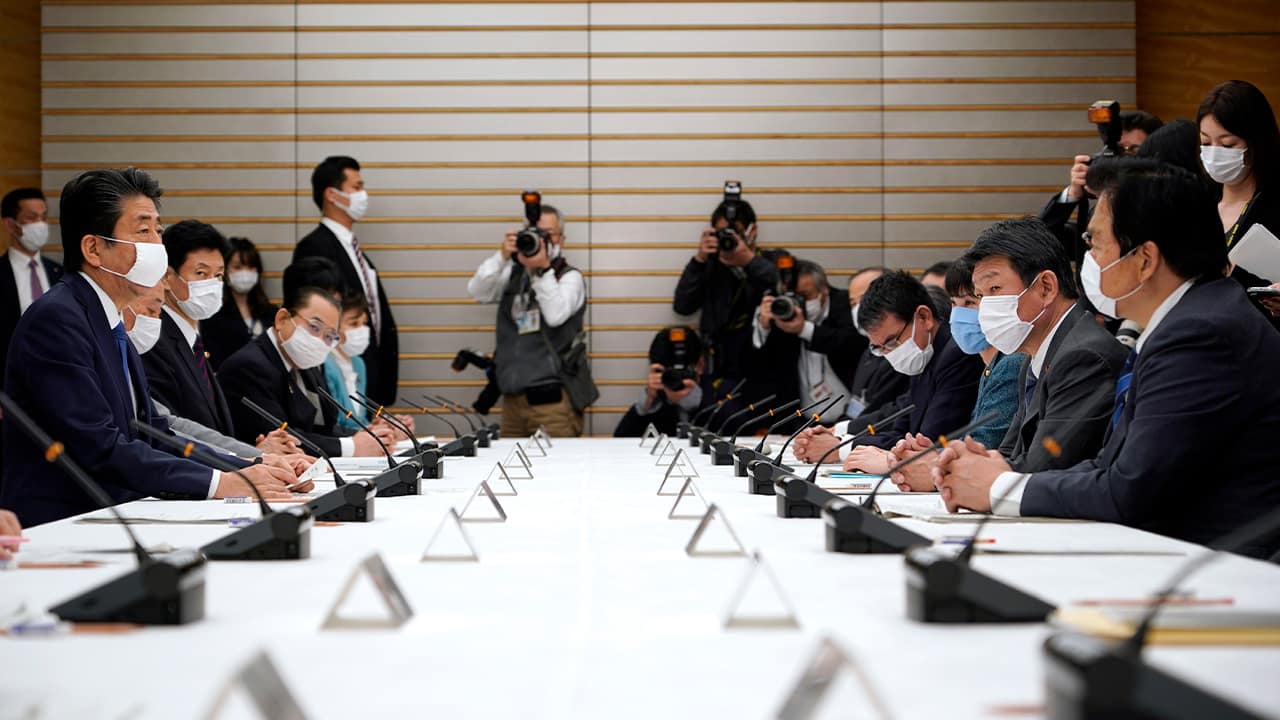 Japanese Prime Minister Shinzo Abe, left, speaks during a meeting of the headquarters for measures against the coronavirus disease at the prime minister official residence in Tokyo, Japan, Monday, April 6, 2020. Abe said that he will declare a state of emergency for Tokyo and six other prefectures as early as Tuesday to bolster measures to fight the coronavirus outbreak, but that there will be no hard lockdowns. (Franck Robichon/Pool Photo via AP)

American said late Sunday that it will run 13 flights daily from the three airports beginning this week, down from an average of 271 flights per day last April.

United Airlines over the weekend reduced its 157 daily flights, to 17. Spirit Airlines has completely cut off service to the city and JetBlue, which is based in New York City, has slashed operations in the city by about 80%.

Delta Air Lines, American Airlines, United Airlines and JetBlue applied for a share of the $25 billion in federal grants designed to cover airline payrolls for the next six months. None disclosed the amount they are seeking.

Apple has sourced more than 20 million face masks through its supply chain, CEO Tim Cook said in a video posted on Twitter.

Apple is dedicated to supporting the worldwide response to COVID-19. We’ve now sourced over 20M masks through our supply chain. Our design, engineering, operations and packaging teams are also working with suppliers to design, produce and ship face shields for medical workers. pic.twitter.com/3xRqNgMThX

Apple hopes to quickly expand distribution beyond the U.S. It plans to ship over a million face shields to healthcare workers by the end of the week, and continue to send that many every week going forward, Cook said.

Ford Motor Co. has manufactured and shipped over 1 million clear plastic face shields to hospitals and first responders all over the U.S. The company sent its millionth protective shield to New York City as part of a shipment of more than 30,000 spokeswoman Elizabeth Kraft said.

Hilton and American Express are donating a million U.S. hotel rooms to medical workers who need to sleep or isolate from their families. American Express and Hilton are paying for the rooms, which are being provided at or below cost by Hilton franchisees.

Facebook is inviting users to share their coronavirus symptoms and location to help researchers track how the disease is spreading or abating.

A survey will appear on Facebook starting this week for some U.S. users and is run by health researchers at Carnegie Mellon University. If it works, it could later expand worldwide.

Facebook CEO Mark Zuckerberg said in a post Monday that “researchers and health officials think the data from these surveys can help determine where to allocate health resources like ventilators, where to tighten lockdown orders, and eventually which counties can safely start opening back up again.”

The company says it is also ramping up efforts to provide user location data to a network of epidemiology researchers who then share their analyses — but not individual data — with cities and states.

Those data-sharing agreements started in March and are supplying customized reports to states including California and Massachusetts, as well as parts of India, to show how social distancing practices are working in specific regions.

Carnival Corp. shares soared 20% Monday after Saudi Arabia bought a big stake in the Miami-based cruise line. The kingdom’s public investment fund acquired an 8.2% stake in Carnival, according to a filing with regulators.

The Saudi investors likely saw a bargain: Carnival’s shares after Monday’s gain were still down 80% since the start of the year as the company canceled sailings due to the new coronavirus.

Carnival has more than 100 ships, including the Diamond Princess — which was quarantined off the coast of Japan in February. Wells Fargo analyst Timothy Conder said in a note that the company’s recent $6 billion capital raise should provide it with enough liquidity through November.

Airbnb said Monday that two private equity firms — Silver Lake and Sixth Street Partners — have invested $1 billion in the home-sharing company. Airbnb said the investment — a combination of debt and equity — will help it grow its host community, with an emphasis on adding longer-term stays.

Airbnb has been struggling with the decline in travel because of the new coronavirus, and said last week it would donate $250 million to hosts over the next two months to make up for canceled bookings.

Stocks jumped in markets around the world Monday after some of the hardest-hit areas offered sparks of hope that the worst of the coronavirus outbreak may be on the horizon. Crude oil fell, giving up some of its huge gains from the prior week when expectations rose that Saudi Arabia and Russia may cut back on some of their production.