WASHINGTON — About half of all working Americans report some kind of income loss affecting themselves or a member of their household due to the coronavirus pandemic, with low-income Americans and those without college degrees especially likely to have lost a job, according to a new poll from The Associated Press-NORC Center for Public Affairs Research. 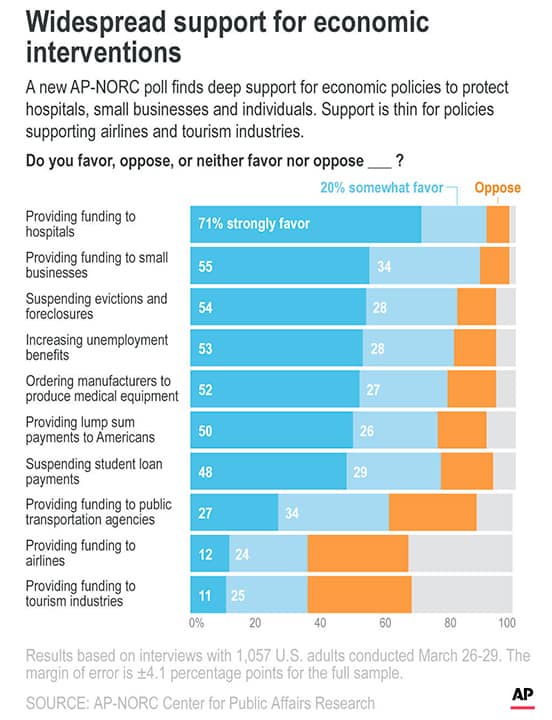 Still, a solid majority of Americans say their own financial situation is good and remain confident in President Trump’s economic leadership, the poll shows.

There are jitters, though. Sixty percent of Americans now say the national economy overall is “poor,” an alarmingly swift reversal from the 67% who called it “good” in January. The spike in pessimism has followed a stock market collapse and the closures of businesses around the country as regular economic activity has been halted in an attempt to limit the number of COVID-19 deaths to hundreds of thousands instead of millions.

The income losses include pay cuts, unpaid time off and reduced hours, as well as actual lost jobs, with 23% of adults who had work when the outbreak started saying they or a member of their household have since been laid off. A third of those in households making less than $50,000 a year say they or a household member have lost their job.

“It’s terrible and it’s going to get worse,” said Bill Ardren, 75, a retired community college vice president from Minnesota. “The stock market is down. Unemployment is up. Stores are shutting down. I don’t see any bright lights in the economy right now.”

The new AP-NORC survey results come as the Labor Department said Thursday a record 6.6 million Americans sought jobless benefits last week, a doubling of the previous record set just the prior week. Those figures suggest the United States lost about 6% of its 152 million jobs in half a month. 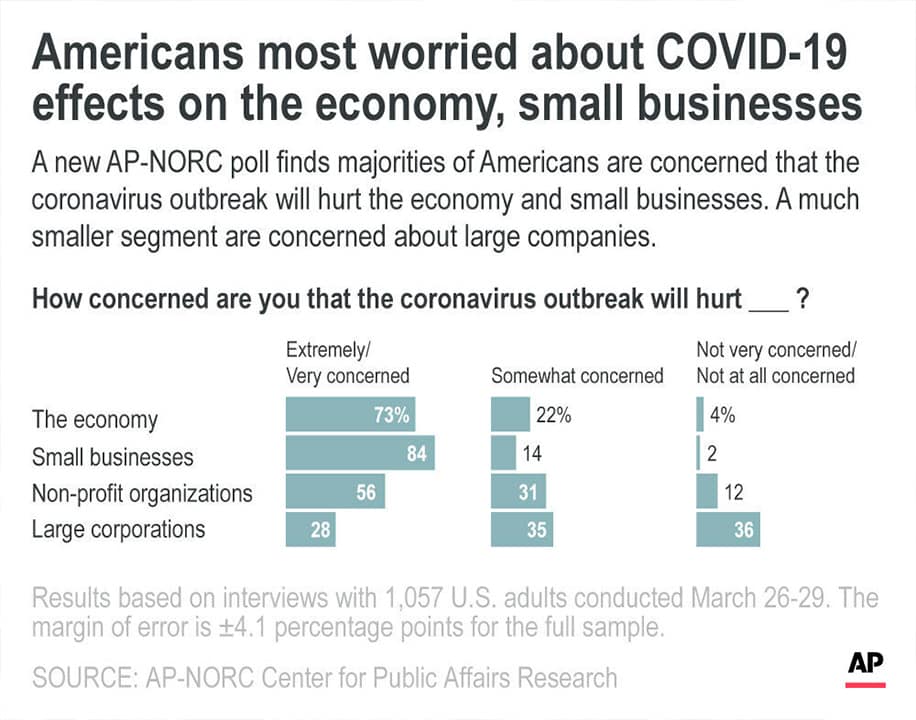 The Poll Found Majorities Remain Confident About Their Personal Finances

Samantha Lafitte, 30, of Moody, Texas, was furloughed from her job as a nurse at a gastro clinic. She will still draw some pay over the next two weeks, meaning that she and her husband have some time before any pressures build.

“But in three weeks, I won’t be paid anything,” said Lafitte, the mother of two children, 11 and 2. “It does put on a financial strain.” 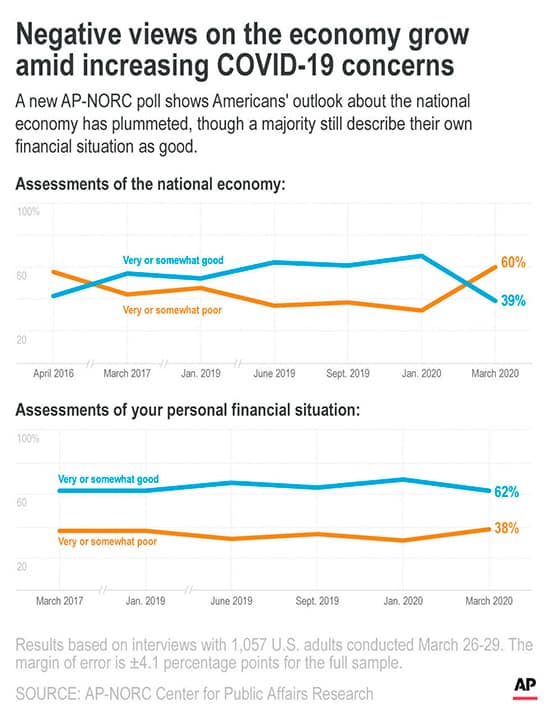 Despite COVID-19’s pocketbook impact on millions of Americans, as well as their overall pessimism about the economy, the poll found majorities remain confident about their personal finances — as well as President Donald Trump’s handling of the economy.

“We’re at a bump in the road right now,” said Chip McEwen, 64, who worked in financial services and drives a charter bus in his semi-retirement in Montgomery, Alabama. “If the COVID-19 weren’t here, we would be rocking and rolling.”

Opinions about the economy are still shaped by political beliefs — a sign of the persistent divisions that have defined the Trump era. Negative views have increased among Republicans, from 10% who called the economy poor in January to 35% now. They are now the overwhelming views among Democrats, up from 47% in January to 81% now.

The outbreak cut short a cruise Ardren was taking with his wife, causing them to disembark early in Australia. A critic of the president, Ardren said his experience abroad led him to see Trump as putting the world at risk by not cracking down earlier on the outbreak.

“People in Australia ask what’s going on in the U.S. and how come we’re doing all this stupid stuff,” he said. “If the U.S. is goofy, they’re in trouble — they know that.”

Yet most Americans still feel confident in Trump’s economic leadership. The president received a 56% approval rating on the economy, significantly higher than his overall approval rating of 43%.

Ross Turner, a 75-year-old surveyor and engineer from Spanish Fork, Utah, thinks Trump has done “pretty well” in dealing with the economy and keeping the public informed. He’s inclined to vote for the president in November, after having not backed him in 2016.

“The idea of having a daily briefing — they’re trying to be transparent about things,” Turner said.

Nick Macrina, 29, was let go last month from his job as a server at El Cortijo in Burlington, Vermont. He’s been told the job should return in May. The added unemployment benefits should help as he continues to study to be an herbal clinician. But a lot will depend on how long the downturn lasts.

“It’s helpful that we’re at least getting something for support,” he said. “But is it enough? It’s hard to say.”