MADRID — Spanish army troops disinfecting nursing homes have found, to their horror, some residents living in squalor among the infectious bodies of people suspected of dying from the new coronavirus, authorities said Tuesday.

To date, 1,535 people have died in the hard-hit Spanish capital, more than half of the national total. The capital region has over 12,350 infections.

Defense Minister Margarita Robles said the elderly residents were “completely left to fend for themselves, or even dead, in their beds.” She said the discovery over the weekend included several nursing homes but did not name them or say how many bodies were found.

A judicial probe into the horrific discovery was opened Tuesday as Spain announced a record one-day jump of nearly 6,600 new coronavirus infections, bringing the overall total to more than 39,600. The number of deaths also leaped by a record 514 to almost 2,700, second only to Italy and China.

As bodies piled up, Madrid took over a public skating rink as a makeshift morgue after the city facility overflowed. To date, 1,535 people have died in the hard-hit Spanish capital, more than half of the national total. The capital region has over 12,350 infections.

Relatives of elderly people and retirement homes’ workers expressed growing concern about the situation at the centers.

“With everything that is happening with the coronavirus, this was a ticking bomb,” said Esther Navarro, whose 97-year-old Alzheimer’s-stricken mother lives at the Usera Seniors’ Center in Madrid, where soldiers found some of the bodies.

“Now we are bracing ourselves for the worst possible outcome,” she told the Associated Press in a telephone interview.

A worker at the nursing home said at least two bodies had to remain in the home for a day before funeral workers, who are working around the clock, arrived to take them away.

“We are very saddened, because the residents are almost like our own relatives due to the time we spend with them,” the worker, José Manuel Martín, told Cadena SER radio.

Pedro Núñez said his father-in-law, Zoilo Patiño Lara, died at the nursing home from the virus on Saturday, although he was never diagnosed or taken to a hospital when symptoms appeared. The man, in his 80’s and suffering from advanced Alzheimer’s, was not removed until Sunday despite Núñez’s repeated calls to funeral home workers.

Domusvi, the private company contracted by the Madrid regional government to run the Usera nursing home, confirmed that two residents died there over the weekend. A company spokeswoman, who declined to give her name, blamed the delay on funeral homes that failed to come quickly to take away the bodies.

While most people suffer only mild or moderate symptoms, such as fever or coughing. from COVID-19, the disease caused by the virus, for older adults and people with existing health problems, it can cause far more severe illness, including pneumonia. 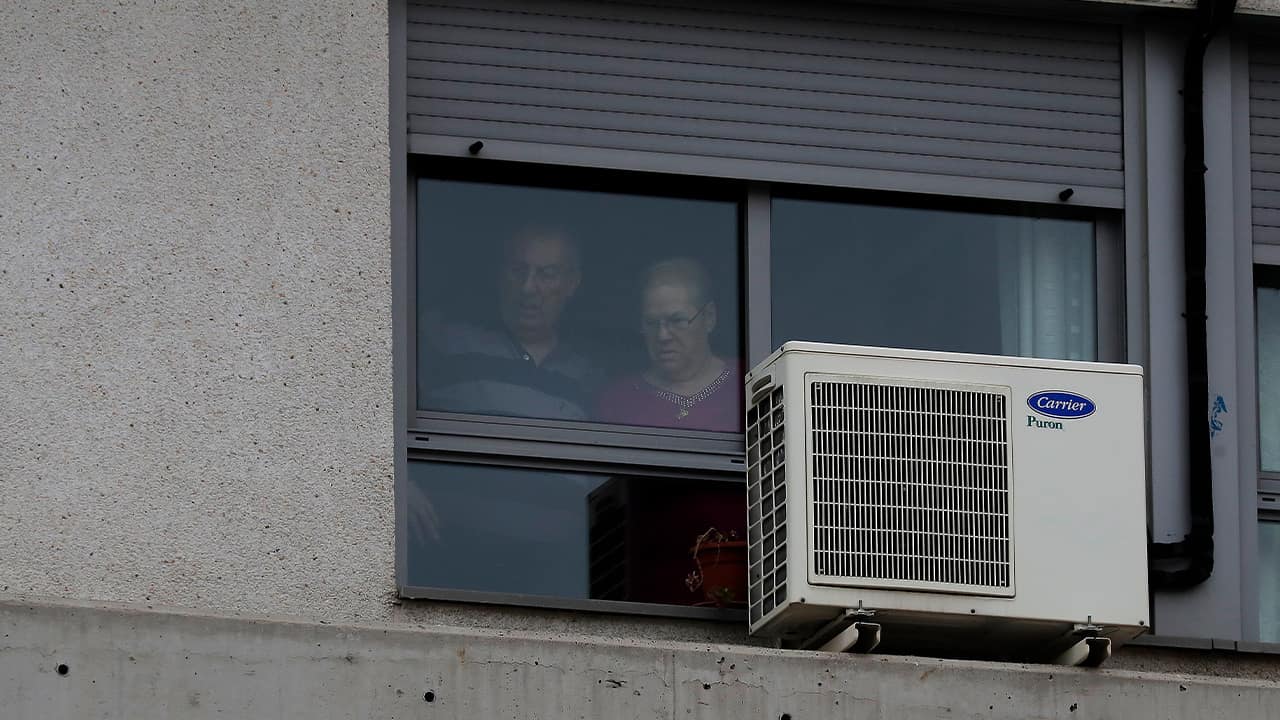 People look out from a window inside of a nursing home where dead bodies were found at the nursing homes of Usera in Madrid, Spain, Tuesday, March 24, 2020. Spanish army troops disinfecting nursing homes have found, to their horror, some residents living in squalor among the infectious bodies of people that authorities suspect have died from the new coronavirus. Prosecutors have launched a judicial probe. For some, it can cause more severe illness, especially in older adults and people with existing health problems. (AP Photo/Manu Fernandez)

Nursing homes worldwide have been especially hard hit. In the United States, several facilities have seen unusually high death tolls, and federal officials found that staff members who worked while sick at multiple long-term care facilities contributed to the spread of COVID-19 among vulnerable elderly in the Seattle area.

In Spain, the government announced last week that it would take over control of senior-care facilities from private companies and, as part of an unprecedented aid package, set aside 300 million euros ($323 million) for adding additional social workers and caretakers.

On Monday, federal regulators gave the Life Care Center in Kirkland three weeks to address the serious infractions that have been linked to the death of at least 37 residents. The nursing home failed to identify and manage sick residents and failed to notify health authorities in a way that placed residents in “immediate jeopardy,” regulators found.

Besides Washington state, burgeoning outbreaks at nursing homes in Illinois, New Jersey and elsewhere in the U.S. have underscored long-running problems in the industry. As in Spain as well as in Italy, France and elsewhere in Europe, among the biggest problems has been a critical staffing shortage.

In Spain, the government announced last week that it would take over control of senior-care facilities from private companies and, as part of an unprecedented aid package, set aside 300 million euros ($323 million) for adding additional social workers and caretakers.

Although Spanish households have traditionally included three generations living under one roof, nursing homes have mushroomed across the country over the past two decades, with multinationals and investment funds entering the lucrative business. According to Spain’s official scientific research body, CSIC, there were 373,000 people in more than 5,400 nursing homes across the country in 2019.

Miguel Vázquez, the president of Pladigmare, an association that fights for better conditions in Spain’s nursing homes, said the virus pandemic has forced a spotlight on the lack of personnel and resources that the wave of profit-seeking private investors has brought to the business of running the facilities.

“Spain has turned a right to being properly cared for, as enshrined in our laws, into a business that benefits from saving costs,” Vázquez said, adding that private facilities have been even more opaque than usual since authorities trying to halt the spread of the coronavirus closed the residences to visitors earlier this month.

“Now that relatives can’t get in, we don’t really know what’s going on there,” he said, adding that the situation was even more dire in the Spanish capital, where 92% of some 400 nursing homes are privately owned or managed.

The head of AETE, which represents the country’s largest for-profit nursing home businesses, said that criticism for “localized problems” should not be extended to the whole industry, which he said has been urging authorities to provide additional protective gear for weeks.

“We provide assistance but we are not health care facilities. The elderly also have the right to be treated in hospitals,” Cubero said.

Simón, the doctor appointed by the Spanish government to coordinate its response to the outbreak, said that over 5,400 health workers have been infected by the coronavirus.

“Everyone has been making a titanic effort, especially our health workers.” — government spokeswoman María Jesús Montero

At the Palacio de Hielo ice skating rink-turned-makeshift-morgue on the outskirts of Madrid, security forces guarded the premises as funeral vans entered the building via an underground car park. Madrid authorities took up the rink’s offer after the city’s municipal funeral service said it could take no more coronavirus victims until it restocked with more protective equipment.

The city government said bodies would be held at the rink until they can be taken to be cremated or buried.

Madrid has also turned two city hotels into hospitals to help with the overflow of virus patients and plans to convert five others. Madrid’s hotel association has offered 40 hotels to help medical workers. Madrid also set up a field hospital in the Ifema trade fair complex, where the U.N. climate conference COP25 was held in December.