A Pot Shop at Your Door: Home Delivery Surges Amid Outbreak 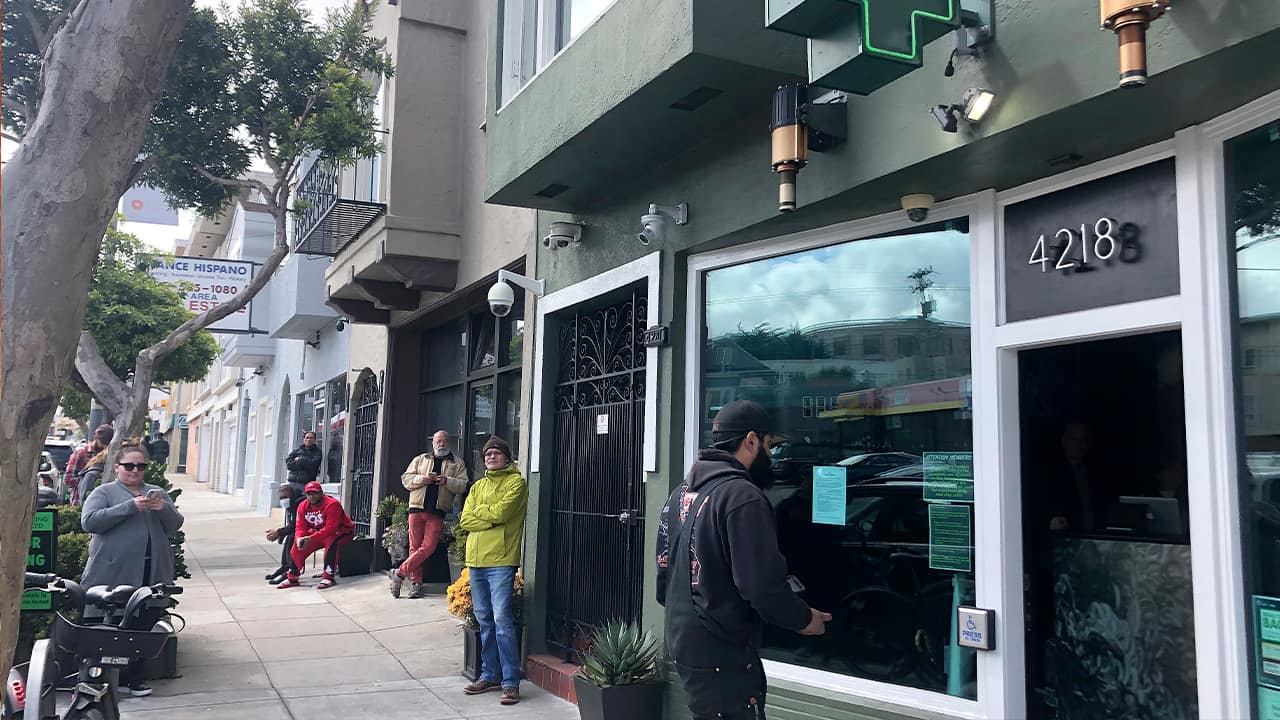 SAN FRANCISCO — One company rushed to expand its delivery fleet. Another has seen sales triple. The global coronavirus pandemic has left millions of people locked out of bars, restaurants and theaters, but it’s been an unexpected boost for some U.S. pot shops.
Marijuana users in the nation’s largest legal pot shop, California, and elsewhere are on a buying binge, as they stock up for potential quarantines or simply light up in search of relief during anxious times and government lockdowns. New York, San Francisco and Palm Springs, California, are among the cities labeling dispensaries “essential” businesses that can remain open during virus lockdowns, in some cases with limitations.

In California, Many Stores Have Been Forced to Close Their Doors

“It’s not much different than Amazon,” Kazan said.
At The Herbery, which operates two stores in Vancouver, Washington, sales have spiked about 30% since last Friday, when Gov. Jay Inslee announced widespread school closures and other measures to deal with the outbreak. One store saw sales double on a single day, said owner Jim Mullen.
“People are buying four or five items instead of one or two,” he said. “People are asking what the legal limit is. We’re seeing bulk buying and people stocking up on products.”
In California, many stores have been forced to close their doors or limit sales over health fears, but marijuana shops have been deemed essential businesses in key markets across California where shelter-in-place orders have been issued, including in San Francisco.
Around the state it’s a case-by-case basis that is changing daily, but it appears much of the legal market is up and running, even as residents often find toilet paper, bread and other staples hard to find. Los Angeles, the state’s biggest market, on Thursday issued an order designating cannabis dispensaries “essential activities” because “they provide services that are recognized to be critical to the health … of the city,” even as it shuttered gyms.
Meanwhile, in New York, health officials notified medical marijuana dispensaries Tuesday that they are considered essential businesses and can stay open even if others are shuttered — as yet, no such order has been issued.
Dispensary operator Etain has seen more patients requesting 30-day supplies, instead of weekly, particularly before it became clear that dispensaries would stay open, chief operating officer Hillary Peckham said.

With a significant jump in home-delivery orders for next week, the family-owned company is adding delivery days. Meanwhile, it’s encouraging people who pick up their medications to make appointments so it can limit dispensary crowds.
The sustained marijuana sales in the midst of a virus outbreak mark a victory for California’s 27-month-old legal industry, which feared illicit shops would flood the gap if the legal market was abruptly shut down.
San Francisco briefly shuttered it pot shops at the start of a lockdown in the region, before allowing sales to resume.
“I’m very grateful that they’ve had it open, simply because I deal with anxiety and I know a lot of people that really depend on the medical marijuana,” said Jackie Cornelius, a customer shopping at The Green Cross dispensary.
Sales for the Oakland-based Ganga Goddess delivery service had witnessed a steady climb in sales earlier this month, but “at the end of last week it just exploded,” said CEO Zachary Pitts.
“Our sales have tripled,” he added. “It’s been insane levels of business.”
Pitts and other industry experts see a simple logic at work. Cannabis can be consumed safely at home — it doesn’t require a social setting, or a trip to a mall — so deliveries make sense.
Companies are not just seeing a boost in new revenue — they are working to keep their employees and customers safe, with such measures as providing hand sanitizer in a cash-heavy business and limiting the number of customers in shops.
Meanwhile, the state has been allowing dispensaries to apply for the right to provide curbside pickups — a sort of drive-thru pot shop previously banned in California. A customer who wished to remain unidentified, right, wears a mask while shopping at The Green Cross cannabis dispensary in San Francisco, Wednesday, March 18, 2020. As about 7 million people in the San Francisco Bay Area are under shelter-in-place orders, only allowed to leave their homes for crucial needs in an attempt to slow the virus spread, marijuana stores remain open and are being considered “essential services.” (AP Photo/Haven Daley)

In the midst of a health crisis, a curbside pickup “is so much more preventative,” said Los Angeles dispensary owner Jerred Kiloh, who closed his sales floor Wednesday after setting up a curbside sales operation, with walk-in pickups at his lobby window on busy Ventura Boulevard.