WASHINGTON — President Donald Trump pitched his proposed payroll tax break Tuesday on Capitol Hill as pressure mounts on the administration and Congress to work more vigorously to contain the coronavirus outbreak and respond to the financial fallout.

Trump’s economic team joined in presenting the economic stimulus package privately to wary Senate Republicans, who have been cool to additional spending at this stage. Democrats are preparing their own package of low-cost virus testing, unemployment insurance and sick pay for workers struggling to keep paychecks coming as the outbreak disrupts workplaces.

“We’re taking this unbelievably seriously,” Trump said after his meeting at the Capitol. “It will go away, just stay calm.”

Asked why he has not yet been tested for the virus, after having been in close contact with several advisers and members of Congress who are now self-quarantined after exposure, Trump said: “I don’t think it’s a big deal” and “I feel very good.”

White House officials have been blindsided by the president’s sudden moves. As Trump headed to Capitol Hill, two administration officials said the proposals he was putting in play had not been completed. They were unauthorized to discuss the planning and requested anonymity.

Trump’s team offered few specifics at the closed door GOP lunch on the size of the payroll tax break or its duration, senators said. Trump has long promised to bring about an election year “tax cuts 2.0,” and seemed to be seizing on the virus fears as a way to bring about a victory on that front before November.

In addition to payroll tax relief, Trump has said he wants help for hourly-wage workers to ensure they’re “not going to miss a paycheck” and “don’t get penalized for something that’s not their fault.” He’s also mentioned small-business loans.

But so far, the president’s approach, based on tax breaks, is receiving a cool response from Democrats as well as Republicans from his own party who say it’s too soon to consider fresh spending from Capitol Hill. Some Republicans endorsed Trump’s suggestion that help be provided to the beleaguered cruise-ship and airline industries. Others spoke up to push for broader economic stimulus from a bipartisan highway bill they said was shovel-ready and popular. The payroll tax plan remains a work in progress.

“They didn’t get into specifics,” said the No. 2 Republican, Sen. John Thune of South Dakota.

Earlier, Speaker Nancy Pelosi told House Democrats that Congress should keep working this week despite concerns about infection spreading there.

“We are the captains of the ship,” Pelosi said during a closed-door meeting, according to a person in the room unauthorized to discuss the private caucus and granted anonymity. “We are the last to leave.” But time is short as Congress heads toward its scheduled break next week.

Trump had Treasury Secretary Steven Mnuchin meet with Pelosi, whose support will be needed for any deal in the divided Congress, where Republicans hold the Senate majority but Democrats hold the House. The two have successfully negotiated in the past and Mnuchin called the meeting productive.

“We’re going to work together on a bipartisan basis to figure out how we can get things done quickly,” he said.

For most people, the new coronavirus causes only mild or moderate symptoms, such as fever and cough. For some, especially older adults and people with existing health problems, it can cause more severe illness, including pneumonia. 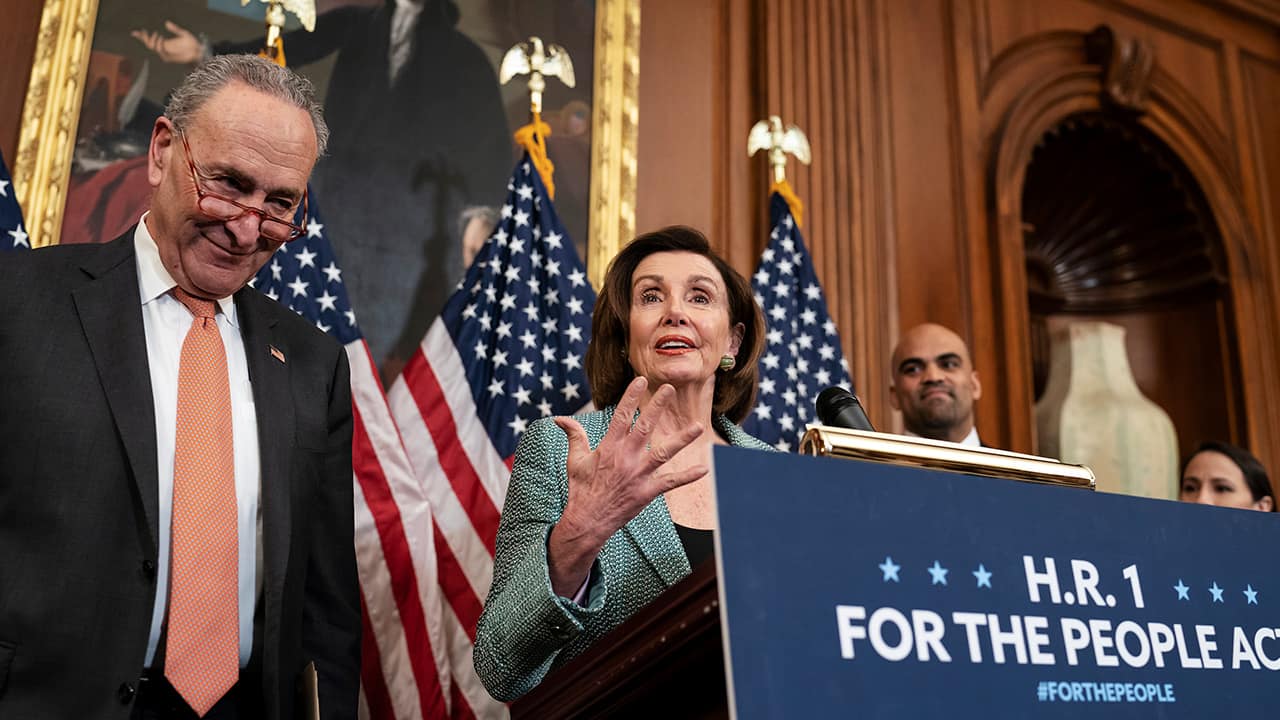 Senate Minority Leader Chuck Schumer, D-N.Y., left, and Speaker of the House Nancy Pelosi, D-Calif., call on Senate Majority Leader Mitch McConnell, R-Ky., to bring the Democrats’ HR-1 “For the People Act” to the floor for a vote, during an event on Capitol Hill in Washington, Tuesday, March 10, 2020. (AP Photo/J. Scott Applewhite)

The vast majority of people recover from the new virus. According to the World Health Organization, people with mild illness recover in about two weeks, while those with more severe illness may take three to six weeks to recover. In mainland China, where the virus first exploded, more than 80,000 people have been diagnosed and more than 58,000 have so far recovered.

Crowds are the norm in the Capitol and handshakes are coin of the realm there, even between political foes. But about a half dozen lawmakers have placed themselves in quarantine after being exposed to someone who had the virus, and the norm has been upended.

At the U.S. Capitol, some senators said they resisted shaking Trump’s hand. Lawmakers were given new instructions on how to protect themselves, with the House’s attending physician asking them to stop shaking hands or touching people during greetings. He recommended the split-fingers Star Trek greeting instead.

Crowds are the norm in the Capitol and handshakes are coin of the realm there, even between political foes. But about a half dozen lawmakers have placed themselves in quarantine after being exposed to someone who had the virus, and the norm has been upended.

During House Democrats’ closed session, one lawmaker, Rep. Raul Ruiz, D-Ca., who is a doctor, noted that the average age in Congress is 57, some lawmakers have underlying health conditions and their work requires them to fly back and forth between home and the capital.

Still, Pelosi implored lawmakers to keep working to strengthen the country’s defenses. Rather than picking up their own coffee and snacks for the breakfast meeting, lawmakers were served by staff from the buffet and warned off touching the serving utensils.

Senate Majority Leader Mitch McConnell was noncommittal after the meeting with Trump. He said any deal would need both both parties and chambers on board. Emphasizing the talks between Mnuchin and Pelosi, he said: “We’re hoping that he and the speaker can pull this together.”

Trump spoke of a stimulus Monday after markets dropped sharply and as the outbreak spread. Markets recovered from some of the losses Tuesday, reacting positively to the prospects for an economic boost from Washington.

Yet even within the administration, there are divisions on the best approach. The payroll-tax plan found support inside the administration from Jared Kushner and Peter Navarro, among others. Other Trump aides, such as Mnuchin and Larry Kudlow, who was also on the Hill, advocated more modest measures.

It was not immediately clear how Trump was aiming to provide assistance to employees weighing whether to stay home because of illness — a crucial aim of public health officials seeking to curtail the spread of the virus.

One mechanism, backed by the Trump-allied National Association of Manufacturers, involves a proposed tax credit for employers who pay employees who are quarantined.

At the Capitol, Democratic lawmakers were told by the House chief administrative officer behind closed doors that the office could support up to 10,000 staff members teleworking if need be. Laptop orders were being expedited and cyber-security measures reviewed.

Several Trump confidants have disclosed they are isolating themselves after potential exposure to the virus; one lawmaker traveled with the president from Florida on Air Force One on Monday; another was his just-tapped new chief of staff.

The Securities and Exchange Commission, which monitors financial markets, encouraged employees at its Washington headquarters to work from home after an employee there had respiratory symptoms and was referred for coronavirus testing.

And Defense Secretary Mark Esper postponed a trip to India, Pakistan and Uzbekistan that was to begin Monday, citing the coronavirus crisis, Pentagon press secretary Alyssa Farah said Tuesday. She said he would remain in the U.S to help manage the Pentagon response.