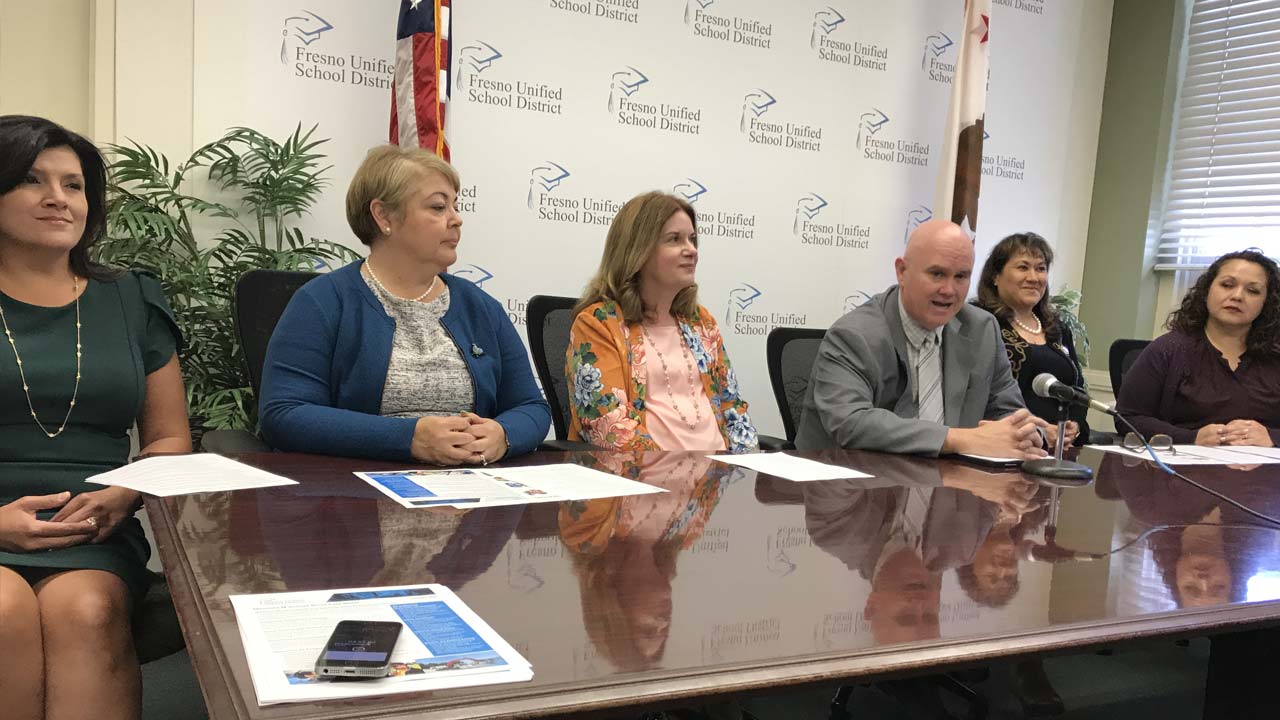 Fresno Unified School District’s $325 million Measure M appears headed to victory, which seems to be eluding other local school bond measures in Tuesday’s primary election.
Based on current vote totals, the only other local school bond measure that seems certain of being approved is Parlier Unified School District’s $11 million Measure D, which is passing by a margin of 62% to 38%.
The Fresno County Elections Office’s next vote total update will be Friday.
Superintendent Bob Nelson and four trustees met with news media Wednesday afternoon to express their gratitude to the community for its support of the school facilities measure that they say is projected to pass.

The county Elections Office reported Wednesday morning that Measure M is winning by a margin of 58% to 42% of the votes counted so far. Most school bond measures are required to have 55% voter approval to pass.
“We feel very blessed, very fortunate,” Nelson said.
They also feel elated, said trustee Valerie Davis, although they were trying not to be overly celebratory at Wednesday’s meeting of The Fresno Compact, a nonprofit providing support by business and communities to local schools and colleges.


“That says a lot about our municipality, that the local voters are about doing what’s right by Fresno Unified kids.” — Superintendent Bob Nelson
Noting that Central Unified’s Measure C is struggling to reach the 55% threshold, trustee Carol Mills said Fresno Unified officials are hopeful the neighbor district will get the necessary yes votes.
“We want Central to pass theirs,” she said. “They’re a growth district. There’s like, three subdivisions going up. They need to build more schools.”

The apparent success of Measure M seems to be bucking a trend statewide of failed bond measures at the state and local levels, Nelson said.
Proposition 13, the $15 billion statewide measure for public schools and colleges, was losing Wednesday by a margin of 44% to 56%.
“That says a lot about our municipality, that the local voters are about doing what’s right by Fresno Unified kids,” Nelson said.
Fresno Unified’s project list is not contingent on getting matching funds from Proposition 13, he said. Rather, the state funds would help the district pay for other projects on its $1 billion list of unfunded facilities needs.

Not a ‘Stealth’ Measure

Nelson and trustees smiled when asked whether Measure M had been a “stealth” bond measure.
Unlike neighboring school districts that mounted political campaigns to advocate for passage of their bond measures, there was no political committee or campaign formed for Measure M.
The trustees’ vote to put the measure on the March ballot came shortly before the deadline to file the paperwork with the county Elections Office, and no political campaigns were created in support of or opposition to the measure.
Fresno Unified residents don’t have the financial resources to underwrite a foundation like other local districts, and this year the district wasn’t assisted by private vendors or unions in mounting a campaign effort, Nelson said.
By law, district officials could not campaign for the measure, although they could provide information, which they did through a mailer, media interviews, the district’s website, and community meetings, he said.
The higher percentage of immigrant residents in Fresno Unified required district officials to first explain how school buildings are funded with taxes and then talk about Measure M itself, Nelson said.

If the margin of victory is maintained, Measure M will be Fresno Unified’s third consecutive bond measure to win approval.
But Ruthie Quinto, the district’s chief financial officer, noted that earlier measures, which were promoted by campaigns, had wider margins of victory than Measure M appears to have.


“Based on yesterday’s upward trend in favor of the bond, we remain hopeful about the outcome after the remaining ballots are counted.” — Central Unified spokeswoman Sonja Dosti
Officials with Clovis and Central districts said Wednesday they were continuing with a wait-and-see attitude, considering the large numbers of votes that remain to be counted — possibly as much as 80,000 countywide, Fresno County Elections Clerk Brandi Orth told GV Wire on Wednesday.

‘Too Close To Call’

Central Unified spokeswoman Sonja Dosti released the following statement Wednesday: “As of this morning, we believe the margin in the number of votes needed to pass Measure C is too close to call. We’re encouraged that with each update from the election office yesterday, the percentage in support of Measure C increased.
“Based on yesterday’s upward trend in favor of the bond, we remain hopeful about the outcome after the remaining ballots are counted.”
Clovis Unified officials also are pinning their hopes on the yet-to-be-counted votes. But if Measure A doesn’t win approval, the district will put another bond measure on the November ballot, Superintendent Eimear O’Farrell told GV Wire on Tuesday.
New schools, which are among the Measure A projects, are needed as the district continues to grow, especially in its southeastern section, she said.
The last thing district officials would want to have to undertake is resetting boundary lines or returning to year-round schools, O’Farrell said.