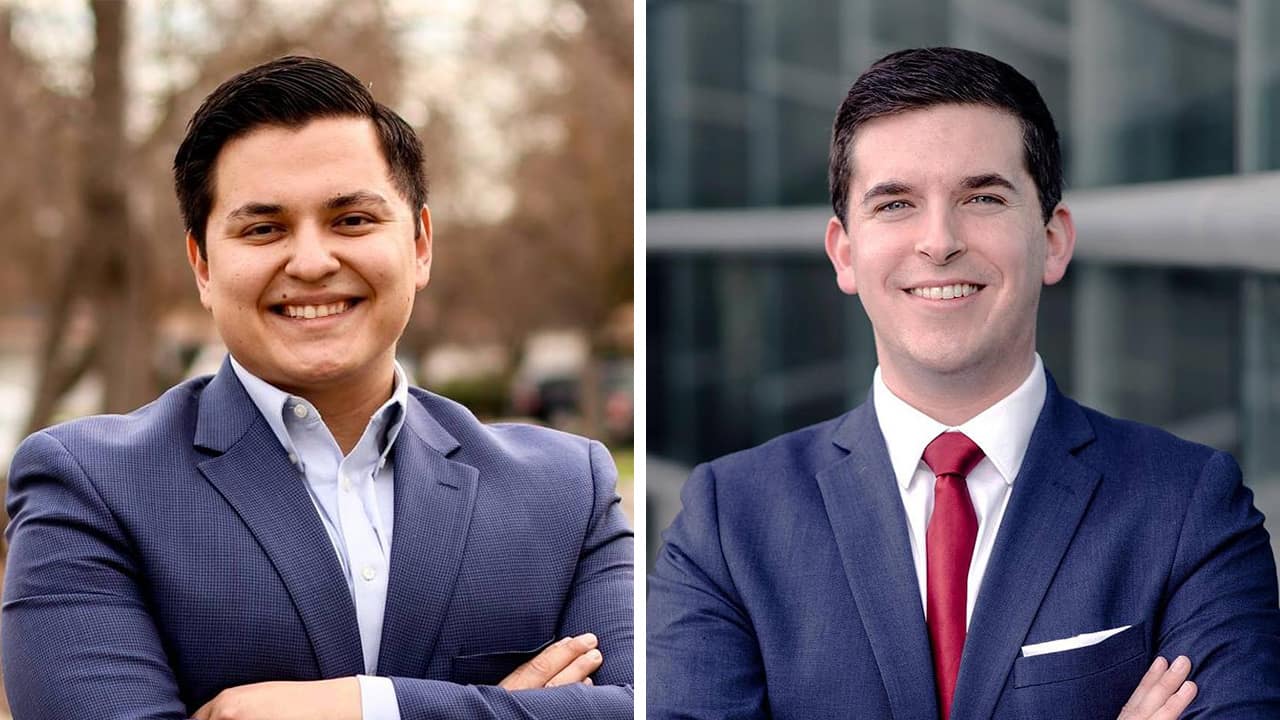 Tyler Maxwell took a 6 percentage point lead against Nathan Alonzo on Tuesday night and is well-positioned to become the new District 4 representative on the Fresno City Council.
“We are feeling more optimistic than cautious. We’ll celebrate for sure once every vote has been counted, but it worked out really good tonight,” Maxwell said after the final update came from the county elections office at 10:38 p.m. Tuesday.
Maxwell leads Nathan Alonzo, 53%-47%, or by 332 votes.
To maintain the majority in the two-candidate race (there were 17 write-in votes), Maxwell would need approximately 47% of the remaining vote to prevail.
County Clerk Brandi Orth will next update the numbers Friday. There are still mail-in ballots that arrived today and through Friday (as long as they were postmarked by Tuesday). Provisional ballots will also need to be tabulated.

@Maxwell4Fresno reflects on the day one results in the #Fresno city council District 4 race. pic.twitter.com/w49t16NY5X

[Update 3/03/2020, 11:30 p.m.] The latest tally from the Fresno County elections department at 9:59 p.m. show little change in the vote totals in the Fresno City Council District 4 race. Tyler Maxwell is maintaining his 54% to 46% lead over Nathan Alonzo.
[Update 3/03/2020, 10:18 p.m.] Tyler Maxwell is holding his lead in the District 4 Fresno City Council race over Nathan Alonzo with the latest vote totals reported. Maxwell has received 2,674 votes to Alonzo’s 2,295 votes. The result percentages remain unchanged with Maxwell holding a 54% to 46% advantage over Alonzo.
[Update 3/03/2020, 9:41 p.m.] Savoring his early lead, Tyler Maxwell spoke briefly at an election night party in downtown Fresno.

Maxwell says he has plenty left to do before taking office next January, if votes hold up.
“This is just the beginning. I’ve been making extensive notes at every single house when I’ve had a conversation with somebody,” Maxwell said. “The work is just starting, all the potholes that need to be filled; all the homelessness that needs to be cured, the parks that need to be renovated. I’m ready to get to work.”

A New Face on Council

The race promises a new councilman — and a councilman under the age of 30. Both men ran to replace Paul Caprioglio, who terms out next January.
Caprioglio will leave having served nearly nine years: his two terms and a fill-in stint for the previous District 4 representative, Larry Westerlund.
The council’s ideological balance could also tip. Caprioglio, a Democrat, is considered moderate, often voting affirmatively on pro-business issues.
Meanwhile, Maxwell received financial support from many labor groups and identifies as a progressive.
Many developers and other business interests sided with Alonzo with their campaign contributions.

Alonzo and Maxwell identified homelessness and public safety as top priorities and offered similar ideas in their January debate hosted by GV Wire.
However, their supporters struck a contrast. Despite being a nonpartisan race, political leanings became an issue. Maxwell is a Democrat; Alonzo is no party preference but registered previously as a Republican.
Maxwell, a council aide to District 7 councilman Nelson Esparza, had his boss’ endorsement, as well as that of council president Miguel Arias.
Alonzo received support from the likes of mayoral candidate and former police chief Jerry Dyer, Sheriff Margaret Mims, and the Fresno Chamber of Commerce, where Alonzo used to work. He now is employed by the Caglia Family of Companies.
Support wasn’t universally based on party preference. Former mayor Alan Autry, a Republican, backed Maxwell; Caprioglio, a Democrat, backed Alonzo.
The most recent campaign finance reporting date covering activity through Feb. 15, Alonzo raised $62,000 more than Maxwell — $202,132 to $139,953.

Mailers Go Negative at the End

The District 4 campaign was mostly congenial until the final few weeks, when dueling mailers accused the other of being a political party phony, not supporting law enforcement, and supporting tax increases.
Mailers in support of Maxwell accused Alonzo of being a Republican loyalist, linking him to Congressman Devin Nunes and President Donald Trump. Other mailers criticized Alonzo for leaving the Republican party.
Likewise, mailers in support of Alonzo bashed Maxwell for either claiming to be a conservative or being too liberal.

The winner will have plenty of time to train for the job. The term starts next Jan. 5, providing 10 months’ lead way.
Two major factors played into the extended onboarding: the primary moving up three months from its traditional June date; and only two candidates running, negating a November run-off election.
Maxwell plans to continue to walk the district, to listen to the issues of the residents.

@Maxwell4Fresno enjoying The Maxwell. He is maintaining 7-point lead with 16% returns in. pic.twitter.com/0DopvGkjX9