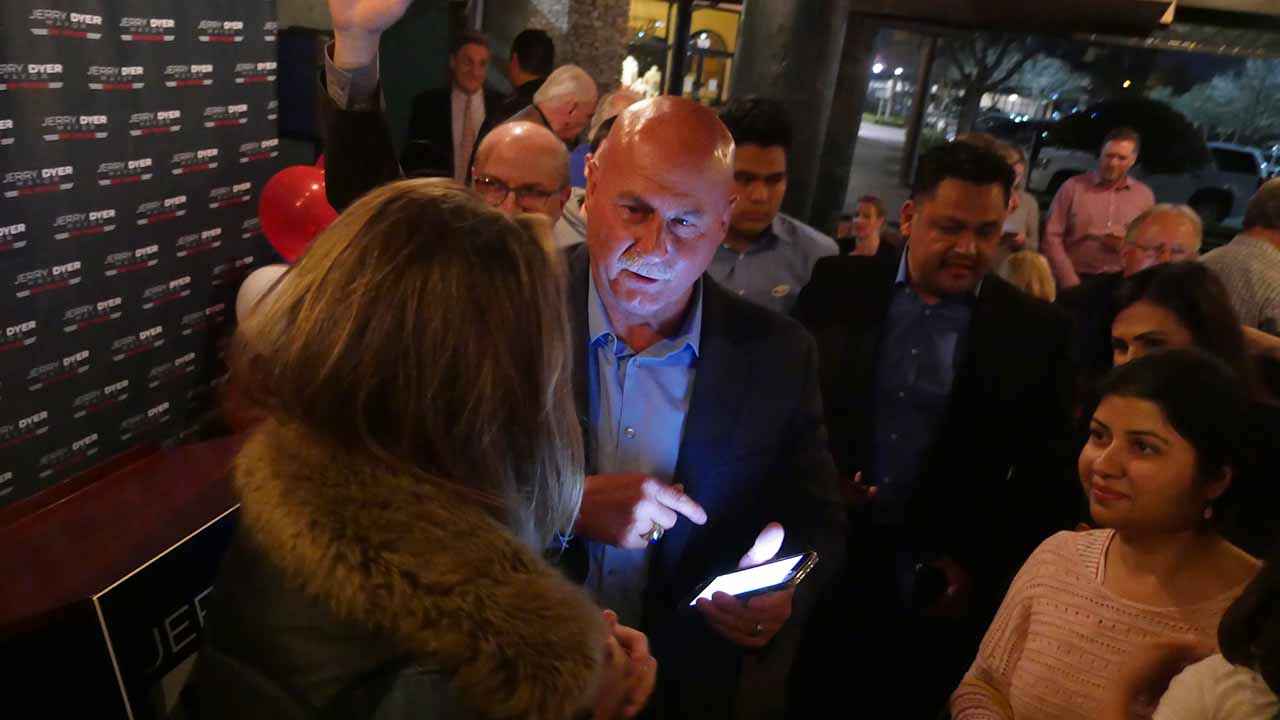 In early returns in the Fresno mayoral race, former police chief Jerry Dyer commanded 54.48% of the vote Tuesday night.
Fresno County prosecutor Andrew Janz trailed 36.15%. The five other candidates combined for about 9% of the vote.
The early count totaled 57,417 votes as of 10:45 p.m.
To win the race and avoid a November run-off, Dyer or Janz must reach 50%-plus-one vote.

Next Results Will Be Posted Friday

“I came here with a great deal of confidence,” Dyer told a packed patio of supporters at the Elbow Room. “Though this doesn’t put us in a position to declare victory, it’s a great start.”
Dyer thanked his financial contributors and his campaign team. He raised nearly $950,000, enabling him to blanket the airwaves and social media with his “One Fresno” message.
Dyer said that he walked neighborhoods daily and spoke at more than 100 events.
“I thought I knew a lot about the issues at the start of the campaign, but by listening to the people I found out that I had a lot more to learn. If you want to lead, you have to adjust based on the facts, and I’m willing to do that. ”

Janz said Tuesday night that he was feeling “impatient” about the slow vote tallies.
“We want numbers from today,” he said. “We know many young voters — people of color — voted today and we’re just waiting for results.
“If you look at what (Democratic presidential contender) Joe Biden is doing nationwide, I think there’s a chance for the numbers to move. Look, we need to get Jerry under 50%. … I think there’s an opportunity for that to happen.”

In April 2018, Dyer signaled that he was contemplating a foray into politics when he told GV Wire “I never shut a door on anything.”
The door to a mayoral bid opened wide in April 2019 when a GV Wire poll indicated that both Dyer and Janz would finish ahead of incumbent mayor Lee Brand in a hypothetical 2020 matchup.
Janz then announced his candidacy in an interview with The Fresno Bee.
“It’s about giving people hope, especially in our underserved communities, and giving them something to live for,” Janz said.
While city voters waited for Dyer to say yea or nay to a mayoral bid, Brand dropped a stunner on Ray Appleton’s KMJ show: He wouldn’t run for a second term.
Brand later said at a news conference that the decision had him feeling like “two tons” had been removed from his back.
Nine days later, Dyer formally entered the race with an event at Manchester Center accompanied by supporters and protesters.
“The only way we can accomplish this is if we all come together,” Dyer said. “There is no north Fresno way or south Fresno way, there is only one Fresno way, and that’s what we’re going to do.” 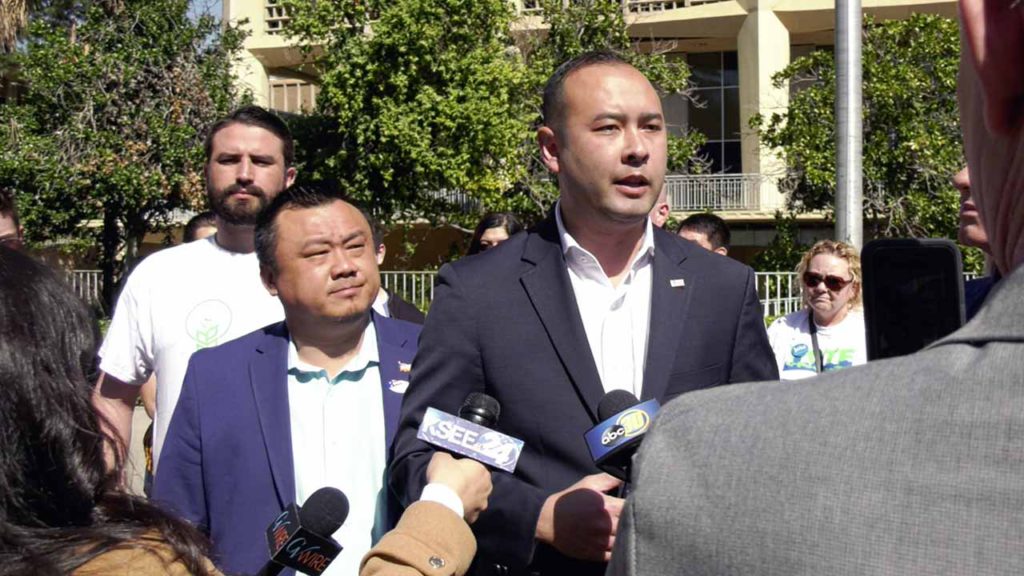 Dyer held two distinct advantages over Janz early on. As a retired police chief, he had unlimited time to expend on his campaign. In addition, Dyer accumulated a massive campaign account that enabled him to advertise heavily on radio and television — often in coveted time slots.
Janz, however, had to balance his duties as a Fresno County prosecutor, campaign efforts and the birth of his daughter. He also struggled to raise campaign money after pledging not to accept contributions from developers and big corporations.
That left an anti-Dyer independent expenditure committee largely funded by the Arambula family and state Democratic lawmakers to carry the weight for the Janz campaign. But Janz did save enough cash to air television ads in the final stretch of the primary election.

Few Fireworks in the Race

Both of the top candidates identified homelessness as the city’s most pressing issue. They also agreed that City Hall needs to become business-friendly and Fresno’s budget must be strengthened by an expected November sales tax measure supporting parks and public safety.
That left voters to mark their ballots based on the candidates’ personalities, life experiences, and political parties.
Janz’s hoped-for edge in an officially nonpartisan race was that 42% of Fresno voters are Democrats, 27% are Republican, and 25% no party preference.
In addition, he continually linked Dyer to President Donald Trump at forums and debates.