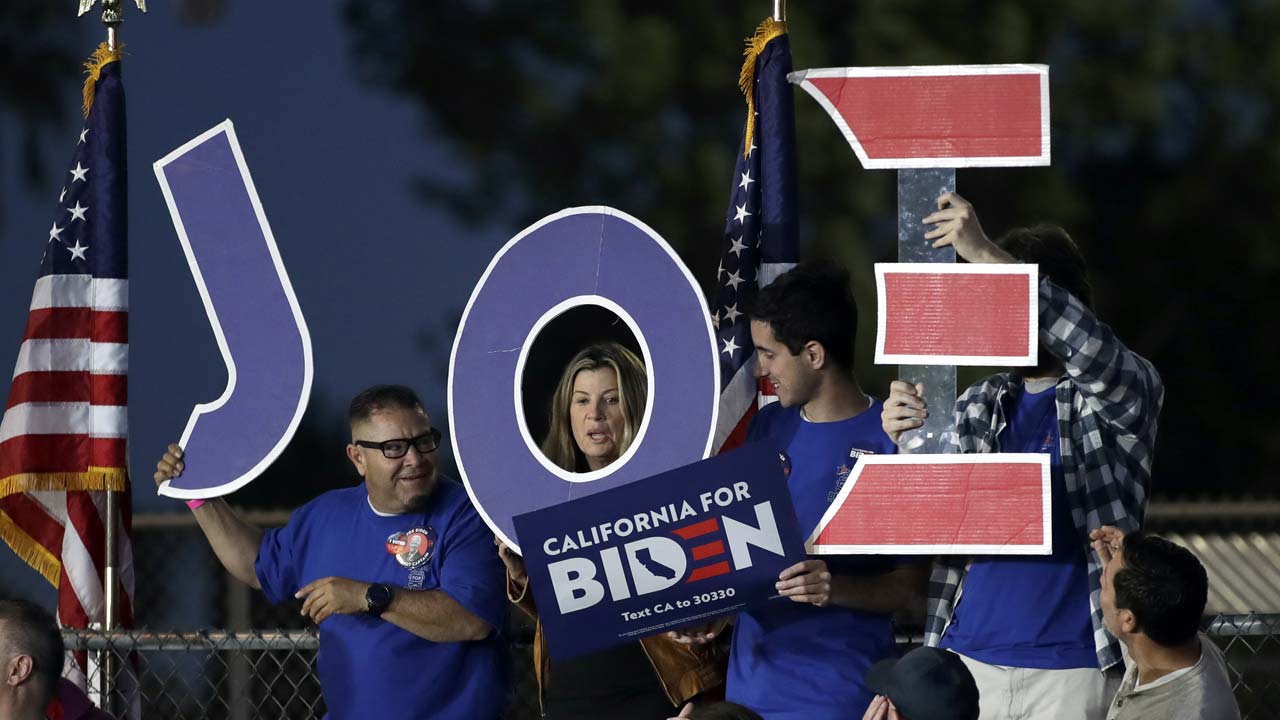 Joe Biden scored key Super Tuesday victories in Minnesota and across the South, building on momentum that has swiftly revived his Democratic presidential campaign in recent days. Bernie Sanders countered with wins in his home state of Vermont and in Colorado, as the race began to shift west, where some polls were starting to close.
Biden took Alabama, Arkansas, Tennessee, Oklahoma and the battleground states of North Carolina and Virginia, a strong showing as 14 states went to the polls across the nation. Still, results were unclear in the two top prizes, Texas and California — meaning the night’s biggest winner remained to be determined.

Minnesota helped Biden show strength in the upper Midwest, and Oklahoma added further geographic variety — but his stronghold remained the Deep South. His victories in heavily African American states complemented the former vice president’s resounding win in last weekend’s South Carolina primary. Virginia was especially key, however, because Sanders, a Vermont senator, and billionaire former New York Mayor Mike Bloomberg heavily contested it over the past week.
A once-jumbled race arrived at the most pivotal night of the primary as an increasingly well-defined battle between leftist Democrats who back the likes of Sanders and Massachusetts Sen. Elizabeth Warren and centrists preferring Biden. A wild card had been Bloomberg, who skipped the primary’s first four states but poured more than $500 million of his personal fortune into TV advertising in Super Tuesday states.

As the night wore on, the former mayor appeared to have little to show for all that spending, though. He was planning to fly to New York to reassess his campaign, according to a person close to his operation who spoke on condition of anonymity to describe internal deliberations. That might leave Warren facing increased pressure to rethink her campaign and may ultimately result in the race winnowing to Biden and Sanders, two white men in their late 70s. It would be a dramatic evolution for a Democratic field once celebrated for so many women and candidates of color.
A measure of good news for Bloomberg came in the U.S. territory of American Samoa, where he took five of its six delegates, with the final one going to U.S. Rep. Tulsi Gabbard of Hawaii. But that wasn’t enough to make up for his struggles elsewhere.
Two other moderates, Minnesota Sen. Amy Klobuchar and Pete Buttigieg, the former mayor of South Bend, Indiana, both left the race in the run-up to Super Tuesday, then endorsed Biden on Monday. That helped unify moderates with surprising efficiency and force behind the former vice president, whose campaign risked collapsing until South Carolina.
Biden’s continued turnaround was all the more surprising because Super Tuesday was supposed to be about monster fundraising and strong political organization across such a large swath of the country. Biden largely had neither and yet managed a strong night. Sanders, an avowed democratic socialist, argued that the party’s elders were scrambling to block him from a nomination it appeared just last week he could run away with.
“The political establishment has made their choice: Anybody but Bernie Sanders,” Sanders campaign manager Faiz Shakir wrote in a fundraising message Tuesday.
“He has never compromised, he will never compromise — and that’s why he deserves to be our next president of the untied states,” Shakir said hours later, during Sanders’ victory party in Vermont.

For Sanders, Super Tuesday 2020 was beginning to look a bit like the 2016 campaign, when Hillary Clinton racked up delegates from Southern states as the Vermont senator struggled to connect with black voters. During his second campaign, Sanders has made a concerted effort to improve his standing with minorities nationwide, and his campaign remains optimistic about heavily Hispanic California, where he’s predicted victory.
But in a sign of his challenges, AP VoteCast, a survey of the electorate, showed Biden continuing to demonstrate strength with black voters in Virginia, North Carolina and Alabama. In Alabama, where black voters made up more than half the Democratic electorate on Tuesday, Biden won 60% of black support, while Bloomberg won about 25%. Sanders won about 10%.
Virginia is a traditional swing state that has moved more reliably Democratic in recent years, especially as people living in densely populated communities outside Washington turned their back on President Donald Trump, as many suburban voters have around the country. North Carolina is a key potential swing state that backed President Barack Obama in 2008 and that Democrats are hoping to take back from Trump in November.

Oklahoma went for Biden despite being Warren’s native state, one that she mentions in the speech she gives at every campaign stop. Sanders also won both Oklahoma and Minnesota during his unsuccessful challenge of Hillary Clinton during the 2016 Democratic primary.
Some polls in Tennessee, though, were ordered to extend voting hours in the wake of a tornado hitting the state. The Tennessee Democratic Party and the presidential campaigns of Biden, Sanders Bloomberg and Warren successfully sued Davidson County election officials and the secretary of state’s office to extend voting for three hours beyond their scheduled 7 p.m. local time close.
Sanders, who had already won New Hampshire and Nevada and secured a virtual first-place tie in Iowa, is the favorite in Maine, and he could end up stealing Warren’s home state of Massachusetts. Early returns there showed a tight, three-way race with Biden, Sanders and Warren.
Warren’s campaign hasn’t predicted outright victory anywhere on Tuesday, but is hoping to pick up delegates in places like California. Her top advisers have predicted that no candidate may get to the Democratic National Convention this summer in Milwaukee with enough delegates to secure the nomination — potentially positioning Warren for the role of kingmaker.
A one-time front-runner, Warren will increasingly face pressure to drop out of the race if she doesn’t win her home state. But, during a rally in Detroit, Warren vowed to soldier on.
“My name is Elizabeth Warren, and I’m the woman who’s going to beat Donald Trump,” she said. “Prediction has been a terrible business, and the pundits have gotten it wrong over and over.”
Texas and California account for 643 delegates between them — or about a third of the nearly 2,000 needed to clinch the nomination. In all, Super Tuesday offered 1,344 new delegates, or around 34% of all the total up for grabs nationwide.