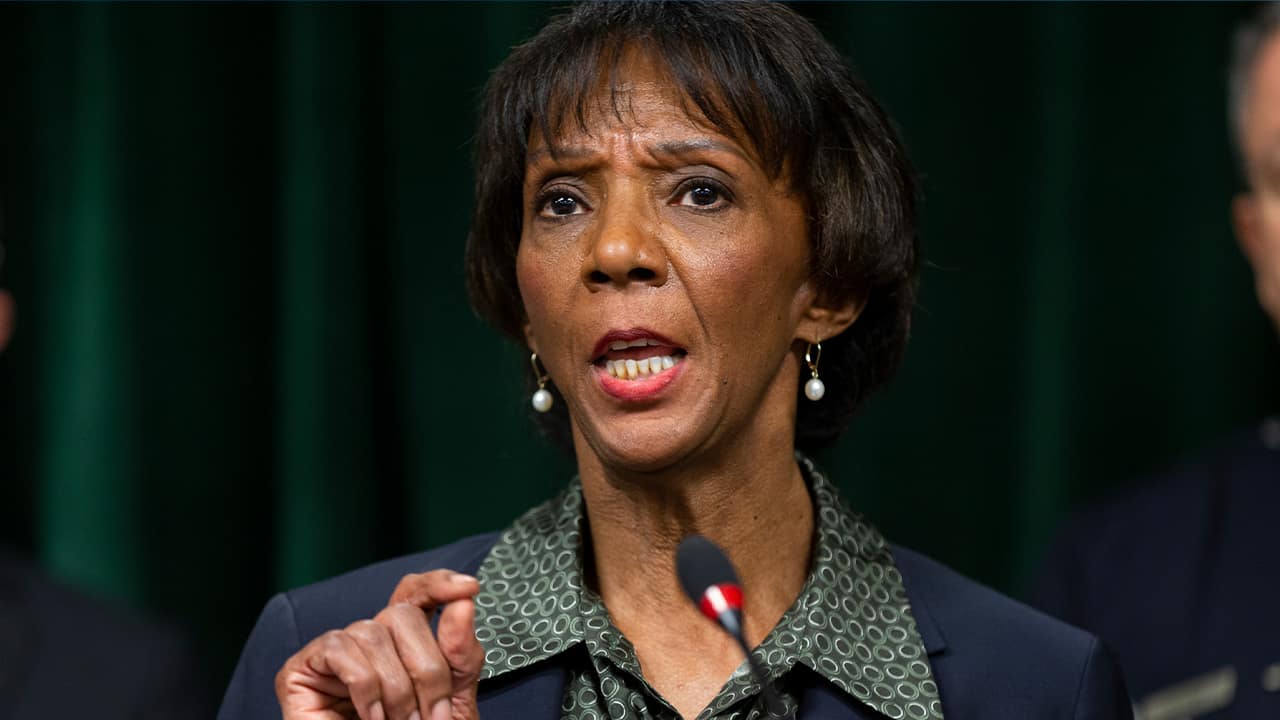 LOS ANGELES — The husband of the first black woman to lead the country’s largest local prosecutor’s office pointed a gun and said “I will shoot you” to Black Lives Matter members demonstrating outside the couple’s home before dawn Monday, prompting an apology from his wife on the eve of her primary election. In an emotional press conference, Los Angeles County District Attorney Jackie Lacey said she and her husband, David, were awakened and frightened by the demonstration that occurred before 6 a.m.. She said he ran downstairs, where she heard him talking to someone, and that when he returned he said there were protesters.
She said he told her: “I pulled my gun, and I asked them to leave.”
The encounter came ahead of a Tuesday primary election in which Lacey is seeking a third term. She has clashed repeatedly with Black Lives Matter protesters, who say she is too protective of law enforcement and doesn’t prosecute officers in fatal shootings.
Black Lives Matter organizers spurned Lacey’s apology during a separate news conference. They said they were “traumatized.”
“She didn’t apologize to us,” Melina Abdullah said. “And an apology isn’t enough. We need her to change. We need her to be accountable or she can retire.”
In a video posted by Abdullah, David Lacey pointed a gun and said, “Get off. Get off of my porch.”
He was an investigative auditor with the DA’s office until his 2016 retirement.

“His response was in fear, and now that he realizes what happened, he wanted me to say to the protesters, the person that he showed the gun to, that he was sorry, that he was profoundly sorry.” the prosecutor said. She also said she also was sorry.
Lacey said she has received death threats and has been followed, photographed and confronted repeatedly. She said she expects people to exercise their First Amendment rights, “but our home is our sanctuary.”
“I do not believe it is fair or right for protesters to show up at the homes of people who dedicate their lives to public service,” Lacey said. She said the gun is registered but would not say if there were other weapons in her house.
Lacey said she has offered to meet with members of Black Lives Matter one on one or in a small gathering. She said the group has rejected those options.
“It seems like what they like is to embarrass me and intimidate me,” Lacey said.
But Black Lives Matter organizers said Lacey has refused to meet with them and has never extended such invitations. They said Lacey would not meet with them publicly so they claimed they were forced to go to her home.
They set up chairs on the sidewalk and three members rang her doorbell, Abdullah said.
“We heard what sounded like a gun being cocked,” she said. “I don’t know how I mustered the words to say ‘good morning’ but I did.”
She said David Lacey pointed the gun “inches” from her chest. Detectives are investigating a “possible assault with a deadly weapon,” the LAPD said in a statement.
Lacey’s office said the case could be brought to an independent prosecutor’s office and the state attorney general’s office is assisting the LAPD.
In the video, Abdullah says off-camera: “Good morning. Are you going to shoot me?”
The man says, “I will shoot you. Get off of my porch.”
Abdullah responds: “Can you tell Jackie Lacey that we’re here?”
The man says: “I don’t care who you are, get off of my porch right now. We’re calling the police right now.”
Police were called the home after being told roughly 50 protesters were outside. There were no arrests.
Lacey, a two-term incumbent, is facing George Gascon, the former San Francisco district attorney, and former public defender Rachel Rossi. The race is nonpartisan and will be decided if one of the candidates receives more than half the votes Tuesday. If no one gets a majority, the top two will face off in November.
Gascon’s campaign did not immediately comment.
“As district attorney, I will never run from the community,” Rossi said in a statement. “And I never thought I’d have to say it, but I will also never threaten to shoot — or have others threaten to shoot — community members protesting my actions.”