WASHINGTON — Americans have widespread concerns about the security and integrity of elections, with few saying they have high confidence that votes in the 2020 presidential election will be counted accurately.

“What’s to prevent old Vlad Putin from interfering in the election? I don’t know.” — Reid Gibson, an independent voter in Missouri

A poll from The Associated Press-NORC Center for Public Affairs Research finds skepticism about the democratic process in the United States. While a third of Americans say they have high confidence in an accurate count, roughly another third are only moderately confident and a remaining third say they have little confidence.

“What’s to prevent old Vlad Putin from interfering in the election? I don’t know,” says Reid Gibson, an independent voter in Missouri, referring to the Russian president, who U.S intelligence agencies say interfered in the 2016 election with a sophisticated operation to sow division and help elect Donald Trump, a Republican.

FBI Director Christopher Wray told Congress this month that Russia is still engaged in “information warfare” heading into the 2020 election but that law enforcement has not seen efforts to target infrastructure like voting machines.

Still, U.S. officials say one of Russia’s goals is to sow doubt about the integrity of U.S. elections, and the poll suggests that even if Russia isn’t targeting voting infrastructure it may be achieving that goal because of the lack of voter confidence following from the 2016 election.

Gibson, who says he leans Democratic, is pessimistic about the state of U.S. politics and has little confidence that votes in the 2020 presidential election will be counted accurately. He says he’s been concerned about the way elections are conducted since 2000, when voter problems in Florida delayed resolution of the presidential election and a Supreme Court decision to stop a ballot recount ultimately put George W. Bush, a Republican, in office.

In general, Americans have mixed feelings about the way the country’s political leaders are chosen, with about as many saying they are optimistic as saying they are pessimistic. 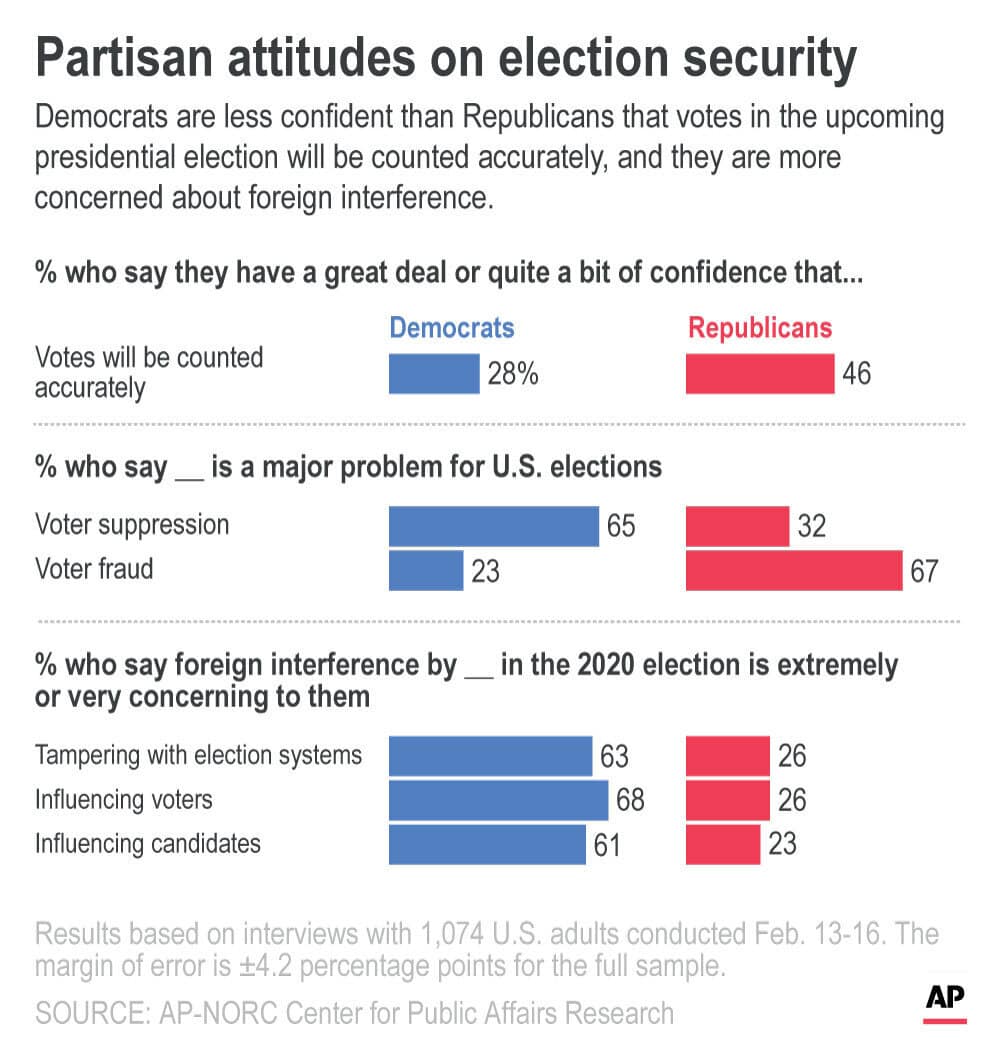 Democrats are less confident than Republicans that votes in the upcoming presidential election will be counted accurately, and they are more concerned about foreign interference. (AP)

Fewer Than Half of Republicans Express Significant Concern About Hackers

There also are widespread fears about security vulnerabilities as well as voter suppression and voter fraud. About half of Americans say they are highly concerned that the country’s voting systems might be vulnerable to hackers, and about that many also are strongly concerned about foreign governments interfering by tampering with election results or influencing American attitudes.

But concerns vary significantly by partisanship, with Democrats more likely than Republicans to express worries about the security of elections. About 6 in 10 Democrats say they are very or extremely concerned that voting systems might be vulnerable to hackers. Roughly two-thirds also are highly concerned that foreign governments will interfere in 2020 by tampering with results or influencing what Americans think about political candidates.

By contrast, fewer than half of Republicans express significant concern about hackers, and just about a quarter are highly concerned about any form of foreign interference.

The government has said that Russian agents also searched for vulnerabilities within election systems in all 50 states during the 2016 election cycle, though there is no evidence that votes were changed.

Trump has often pushed back on the findings by his own intelligence agencies, saying frequently that investigations into interference were a “hoax.”

Voter fraud and voter suppression also elicit a wide partisan divide. Nearly 7 in 10 Republicans show concerns about voter fraud, saying people voting who are not eligible is a major problem in U.S. elections. That compares with about a quarter of Democrats.

Meanwhile, Democrats are concerned about voter suppression. Almost two-thirds say it is a major problem that people who are eligible are not allowed to vote, while only about a third of Republicans say the same.

The opposing views come as Republicans in some states have implemented laws requiring voters to show identification, arguing that it will combat voter fraud. Democrats have fought many of those laws, saying they disenfranchise some voters.

“I think it’s about as fair is it could be. If someone was trying to hack into a voting system, the United States would be on top of that before you and I even knew it.” — Richard Merritt, 53, a Republican from Maine who supports Trump

With their candidate sitting in the Oval Office, Republicans are about twice as likely as Democrats to say they are optimistic about the way political leaders are chosen. Republicans also are more likely than Democrats to be strongly confident that votes will be counted accurately.

“I think it’s about as fair is it could be,” says Richard Merritt, 53, a Republican from Maine who supports Trump. “If someone was trying to hack into a voting system, the United States would be on top of that before you and I even knew it.”

Robert King, a 70-year-old African American man from Michigan, says he might not even vote this year “because of the tampering and all of this other stuff going on.” He says he’s concerned that his vote might not even be counted.

Nearly 8 in 10 black Americans also say it’s a major problem that people who are eligible are not allowed to vote.

Richard Hasen, author of the book “Election Meltdown: Dirty Tricks, Distrust, and the Threat to American Democracy,” says voter identification laws have led voters in both major political parties to believe that the other side is cheating. “There is increasingly incendiary rhetoric” on the voter fraud issue, he says.

Hasen says he believes many Americans’ concerns about the process come after they tune into major news events, such as election problems in the recent Iowa caucuses or Mueller’s investigation into Russian interference.

“I think there are threats to our system,” Hasen says, “but I think the question of voter confidence is separate from the reality.”

The AP-NORC poll of 1,074 adults was conducted Feb. 13-16 using a sample drawn from NORC’s probability-based AmeriSpeak Panel, which is designed to be representative of the U.S. population. The margin of sampling error for all respondents is plus or minus 4.2 percentage points.