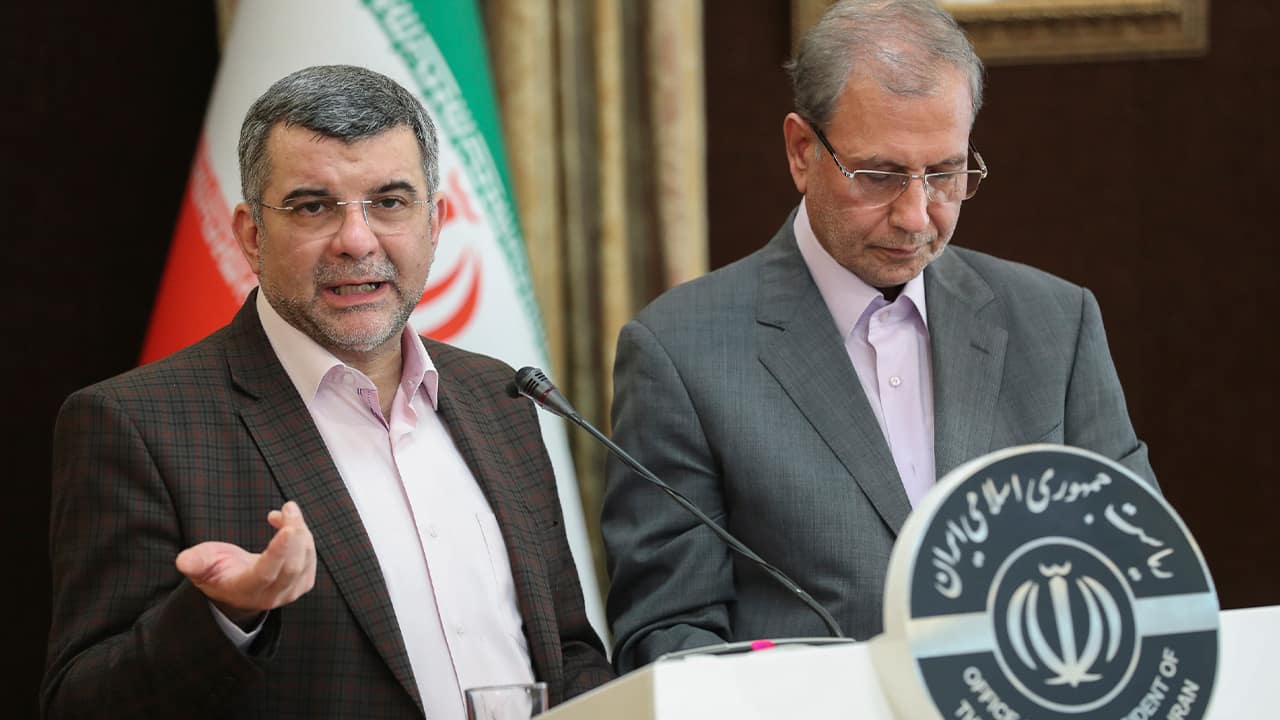 DUBAI, United Arab Emirates — The head of an Iranian government task force on the coronavirus who had urged the public not to overreact about its spread has tested positive for the illness himself, authorities said Tuesday, as new cases emanating from the country rapidly emerged across the Middle East.

“I wanted to tell you that, rest assured that with efforts of your servants at the Health Ministry … and backed by you people, the government and all elements of the establishment, we will be victorious in our combat against this virus within the next few weeks.” — Iraj Harirchi, head of Iran’s counter-coronavirus task force

Only a day earlier, a coughing and heavily sweating Iraj Harirchi said at a televised news conference in Tehran that “the situation is almost stable in the country.”
The acknowledgement of Harirchi’s illness underscores a growing crisis of confidence felt by many in Iran after nationwide economic protests, a U.S. drone striking killing a top Iranian general and Iran accidentally shooting down a commercial jetliner and insisting for days that it hadn’t.
Iran on Tuesday also saw a crucial air link cut to the United Arab Emirates, home to the world’s busiest airport for international travel in Dubai, as Bahrain announced more confirmed cases of the virus from passengers who transited through the UAE. The number of cases also increased sharply elsewhere in the region.
Qatar Airways, one of the Mideast’s biggest carriers, also said it was essentially halting operations to Iran and South Korea until further notice.
Health Ministry spokesman Kianoush Jahanpour confirmed Harirchi had the virus. Harirchi himself posted an online video saying he had it and that he had quarantined himself at home. He promised that authorities would bring the virus under control.
“I wanted to tell you that, rest assured that with efforts of your servants at the Health Ministry … and backed by you people, the government and all elements of the establishment, we will be victorious in our combat against this virus within the next few weeks,” Harirchi said.
On Monday, however, he had offered a far different assessment while repeatedly wiping his brow while standing beside government spokesman Ali Rabiei.


Related Story: Director of Busiest US Port: Economic Fallout From Coronavirus Appears ‘Much ... Pedestrians wear masks to help guard against the Coronavirus in downtown Tehran, Iran, Tuesday, Feb. 25, 2020. The head of Iran’s counter-coronavirus task force has tested positive for the virus himself, authorities announced Tuesday, showing the challenges facing the Islamic Republic amid concerns the outbreak may be far wider than officially acknowledged. The announcement comes as countries across the Mideast say they’ve had confirmed cases of the virus that link back to Iran, which for days denied having the virus. (AP Photo/Ebrahim Noroozi)

The Coronavirus Has Infected More Than 80,000 People Globally

“Currently the situation is almost stable in the country and we could manage to minimize the problem,” Harirchi said. He also said that “quarantines belong to the Stone Age.”
That optimism, while no longer held by Harirchi, also appeared to be undercut by Jahanpour himself on Tuesday. The Health Ministry spokesman suggested it may take at least until Nowruz, the Persian New Year on March 20, for Iran to reach a point where the virus was contained. He added that a more “pessimistic” assessment suggested Iran would contain it by late April.
“We don’t expect a miracle in the short term,” Jahanpour said.
A prominent pro-reform lawmaker, Mamoud Sadeghi of Tehran, also said in a tweet that he tested positive for the virus.
The coronavirus has infected more than 80,000 people globally, causing about 2,700 deaths, mainly in China. The World Health Organization has named the illness COVID-19.
Jahanpour on Tuesday said 15 people had died in Iran so far amid 95 confirmed cases. However, experts remain concerned Iran may be underreporting cases and deaths, given the rapid spread from Iran across the Persian Gulf.
A hard-line lawmaker in Iran alleged Monday there had been 50 deaths in the Iranian city of Qom alone, which was denied by authorities.
“What do you have to say about those buried in Qom cemetery?” tweeted lawmaker Ahmad Amirabadi Farahani. “Practitioners in hospitals write ‘respiratory problems’ as the cause of death. But you know that they are from those quarantined for corona.”
While Farahani’s politics make him eager to undercut moderate President Hassan Rouhani, his earlier warning that Qom’s top doctor fighting the coronavirus also had been infected has proven to be true.
Rouhani said he opposed closing public and government offices.

U.S. Is ‘Deeply Concerned’ That Iran ‘May Have Suppressed Vital Details About the Outbreak’

“This is one of the plots by the enemy to shut down the country through spreading fear,” he said in a speech, although he also urged people to avoid crowds, including at major Shiite shrines.
U.S. Secretary of State Mike Pompeo said the U.S. is “deeply concerned” that Iran “may have suppressed vital details about the outbreak.” In this photo released by the official website of the office of the Iranian Presidency, President Hassan Rouhani, center, speaks while visiting a new highway that connects Tehran to the north of the country, Iran, Tuesday, Feb. 25, 2020. Rouhani sought to reassure the nation in a speech on Tuesday, calling the new coronavirus an “uninvited and inauspicious passenger.” “We will get through corona,” Rouhani said. “We will get through the virus.” (Iranian Presidency Office via AP)

Dubai Had Been Screening Passengers on Flights From China

The announcement came after Bahrain said it would suspend all flights from Dubai and Sharjah, a neighboring UAE emirate home to Air Arabia, for 48 hours. The small island nation off Saudi Arabia announced its first cases of the virus on Monday. By Tuesday, Bahrain said it had 23 confirmed cases.
Dubai had been screening passengers on flights from China, where the outbreak began in December. Emirates and Etihad still fly to Beijing as the UAE works to maintain close ties with China.
Afghanistan, Kuwait, Iraq and Oman also announced their first cases of the virus Monday and connected them to travel with Iran. The UAE, a federation of seven sheikhdoms on the Arabian Peninsula, has reported 13 cases of the virus. Most of those were connected to Chinese travel.
Also Tuesday, Kuwait raised the number of its infected cases from five to eight, according to the state-run KUNA news agency. It said the three latest cases involved Kuwaiti citizens just back from Iran. The five previously reported cases were passengers on a flight from the Iranian city of Mashhad, where Iran’s government has not yet announced a single case of the virus.
Iraq’s Health Ministry said four new cases of coronavirus were diagnosed in the northern province of Kirkuk. It said the afflicted were members of an Iraqi family who had returned recently from Iran. Iraq announced its first case Monday in the Shiite Muslim holy city of Najaf: an Iranian student who has since returned to Iran.
The northern region, which shares a border with Iran, is a hub of economic activity and the primary gateway for the Kurdistan Regional Government to import Iranian goods and fuel, and Kurds in Erbil lined up for gas, fearing shortages. The KRG also suspended working hours across educational institutions for a month.
Harirchi, the ailing Iranian official, had the following advice for worried Iranians: “Take care of yourselves. This virus is a democrat virus! It does not differentiate between the rich and the poor or official and nonofficial and anyone could get it.”

Related Topics:coronavirusIranMiddle East
Up Next