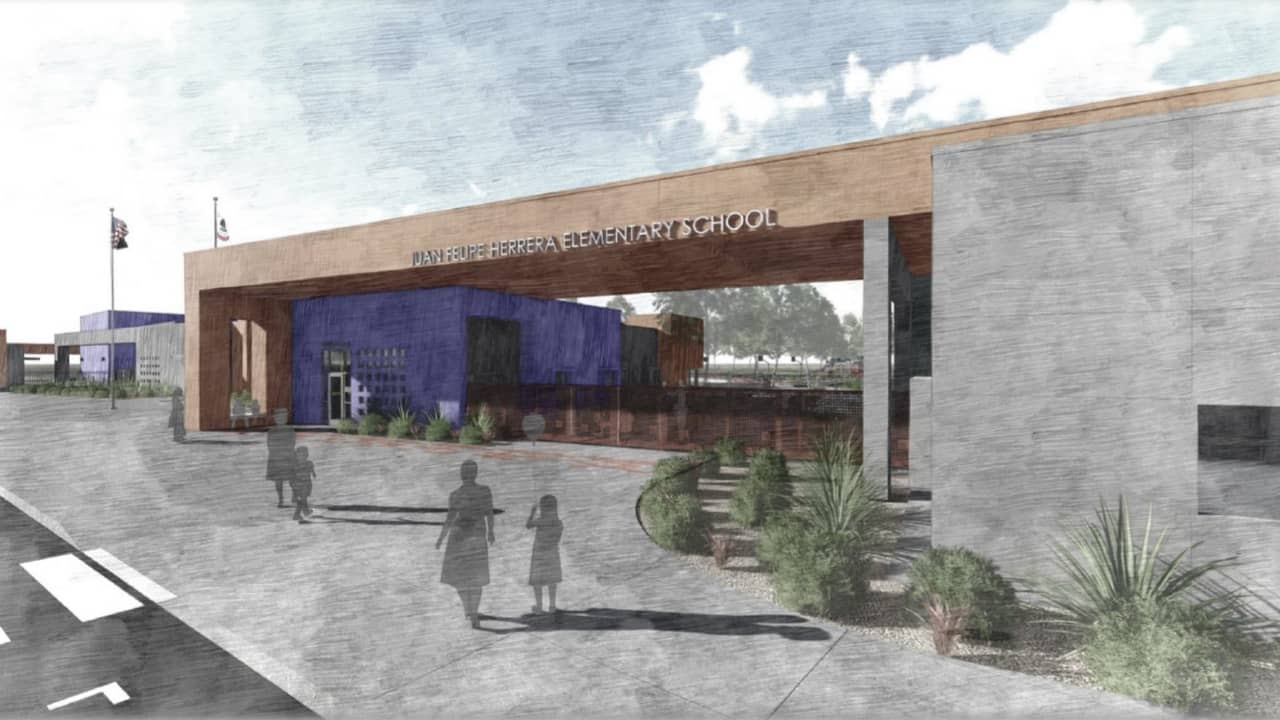 Fresno Unified trustees on Wednesday will consider inking an agreement that guarantees workers building a new elementary school in southeast Fresno will come from union hiring halls.
If approved by the board, the project labor agreement will be included in the construction contract for Juan Felipe Herrera Elementary School.
Critics say project labor agreements cause costs to soar and limit the pool of local workers eligible for hiring.
Proponents say the agreements prevent work stoppages and provide expanded opportunities for apprenticeship training.
Meanwhile, Fresno Unified officials hope such agreements could put the district closer to the head of the line for state school construction funds.

In addition to the project labor agreement for Herrera School’s construction, trustees will consider signing a deal with local labor unions that would provide apprenticeship pathways for Fresno Unified students who want careers in the construction trades.
Under the memorandum of understanding, the Fresno, Madera, Tulare, Kings Building and Construction Trades Council or unions would provide a coordinator or craft representative who would visit each of the district’s high schools and alternative sites at least monthly to provide advice to students.
The trades council and unions also will work with career technical education teachers to design curriculum, offer off-campus curriculum or classes and tours of apprenticeship programs, and may provide scholarships for disadvantaged students, under the memorandum.


“It’s looking like the district wants to only work with the union (apprenticeship) program and not with anyone else. That’s a disservice to the entire community.” — Nicole Goehring, Association of Builders and Contractors
The Herrera project labor agreement includes provisions giving Fresno Unified pre-apprentice graduates priority for apprenticeship programs, with a goal of hiring them for at least 15% of the project’s apprentice work hours.

But a spokeswoman for the Association of Builders and Contractors Northern California questions why the district would sign an agreement that she says excludes the majority of trades workers in the Fresno area because they aren’t union members.
And considering the shortage of construction workers, said Nicole Goehring, vice president of government and community affairs, it doesn’t make sense to prevent apprentices from other training programs from having access to the district’s projects.
“It’s looking like the district wants to only work with the union (apprenticeship) program and not with anyone else,” she said. “That’s a disservice to the entire community.”
Construction workers who sign up with a union long enough to work on a job with a project labor agreement invariably lose pension and other benefits that are paid on their behalf to the unions because they don’t stay long enough to be vested, Goehring said.
And PLA projects such as the city of Selma’s new police station are more expensive for taxpayers, Goehring said. She said the city initially estimated that the project would cost $6 million, but when the sole bid came in at $7.9 million, the council rejected the bid and reopened bidding.
On the next round, the only bid came in at $8.6 million, which the council accepted. The city is in search of state funds make up the budget shortfall, she said.


“The end goal, and my whole reason to get engaged in PLAs — and I know it’s going to sound funny coming from somebody who’s a 33-year (union) man — is apprenticeship. Because I know apprenticeship is transformative, apprenticeship can change a community.” — Chuck Riojas, Fresno, Madera, Tulare, Kings Building and Construction Trades Council
But Chuck Riojas, financial secretary/treasurer of the trades council, said Selma’s project labor agreement was not to blame. He said the city’s original estimate came years before the bid request was issued, and the city’s project was one of many that were vying for the attention of contractors nationally — many of which were significantly larger than $6 million, he said.
By contrast, Riojas said, the Fresno airport project — which was bid with a project labor agreement — had an up-to-date cost estimate, Riojas said.

Riojas said the biggest benefit of Fresno Unified’s project labor agreement and the memorandum of understanding is the expanded training opportunities for apprentices, which he said the Legislature recognized when adding the PLA preference to Proposition 13.
The $15 billion state bond measure for school construction that’s on the March 3 ballot gives funding preference to such projects.
“The end goal isn’t union membership,” Riojas said. “The end goal, and my whole reason to get engaged in PLAs — and I know it’s going to sound funny coming from somebody who’s a 33-year (union) man — is apprenticeship. Because I know apprenticeship is transformative, apprenticeship can change a community. I know what apprenticeship did in my life.”


Related Story: Should Fresno Unified Use PLAs to Build Schools?

Unlike most Fresno Unified school board meeting agenda items, the project labor agreement was not included online for easy access by the public. The agenda report noted that it was available for review in the board office. GV Wire obtained a copy from the Association of Builders and Contractors.
District spokeswoman Nikki Henry said the agreement will be uploaded to the agenda’s backup materials by Wednesday morning.
The $46.8 million Herrera School project is already at least a year behind schedule, and district officials now forecast an opening of August 2022 instead of August 2021 — if the project stays on track. Henry told GV Wire that the district has received conflicting studies about whether the project labor agreement may affect the cost estimate, so at this point the cost to build the school is unknown.
Bid documents for the Herrera project are being developed and, depending on the board’s vote Wednesday, could include the project labor agreement. The recommended bid documents could go before the board in late May to early June. (An earlier version of this story incorrectly reported the time frame as late March to early June.)


Related Story: Will FUSD's Newest Elementary Be Ready by 2021? Maybe Not. 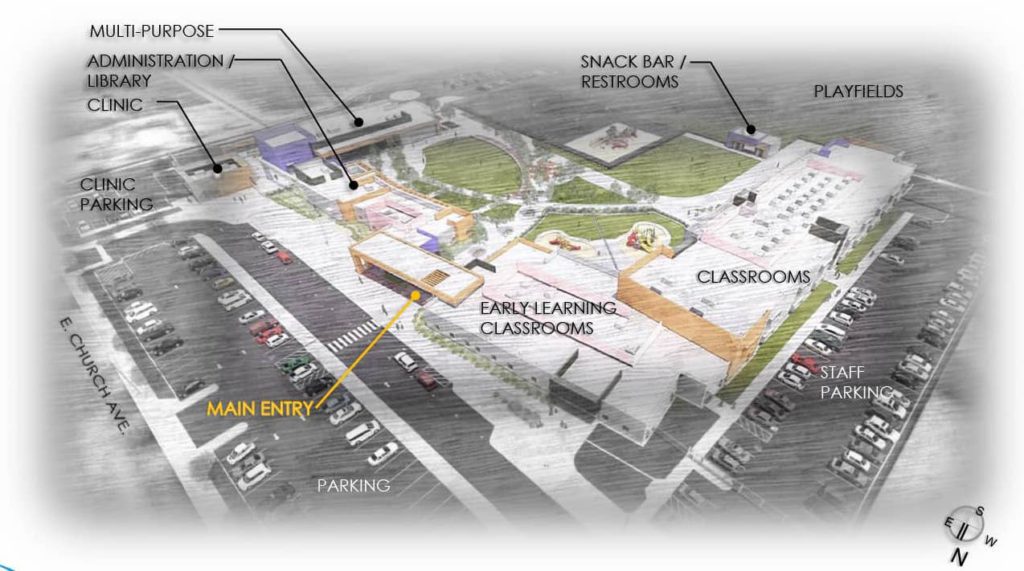 The school is the only new elementary on Fresno Unified’s Measure X priority projects list. Voters approved the $225 million bond measure in 2016.
And, faced with $1 billion in needed school improvements and construction, the district is asking voters to approve Measure M, a $325 million local bond measure, on the March 3 ballot.
It will need 55% voter approval to pass.
The Fresno Unified board meeting is scheduled to begin at 6 p.m. Wednesday and will be held in the district’s downtown headquarters at 2309 Tulare St.

Madera Woman Gets 3 Years in Prison for Deadly Dog Attack