How Is This Poor, Rural District Keeping Kids in School? 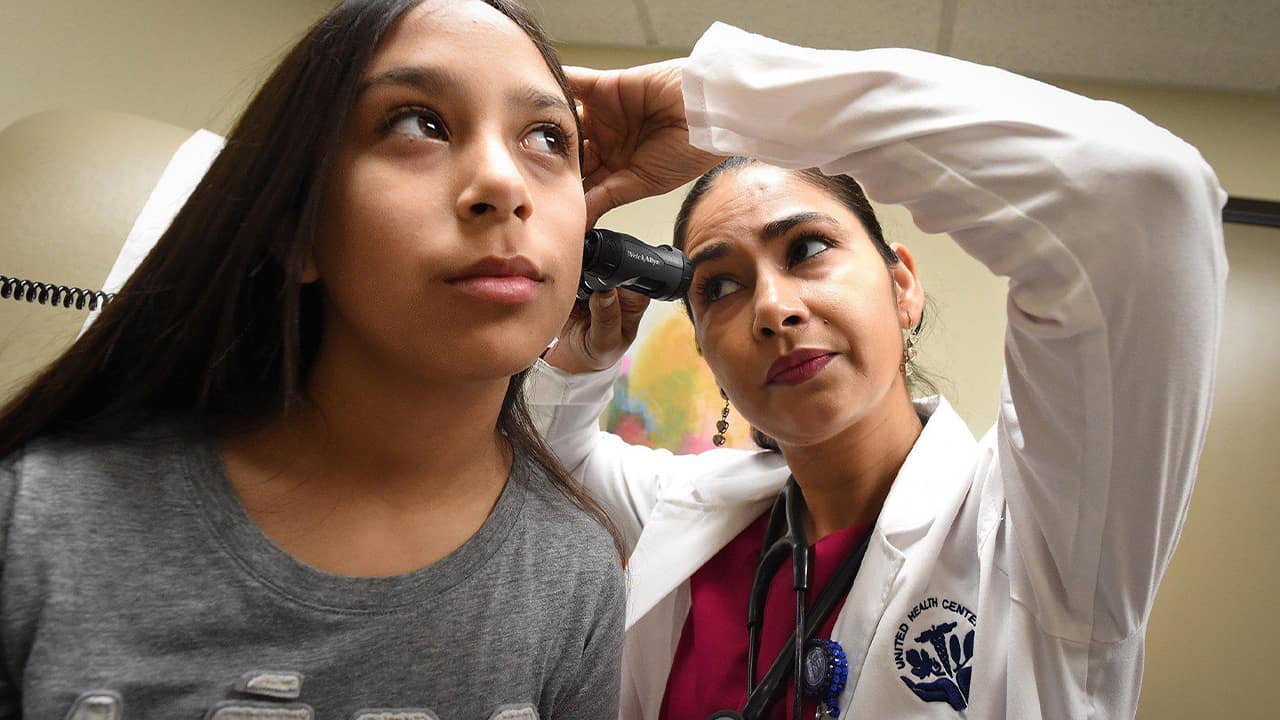 At a time when rural schools all over California struggle to keep students in school, a three-year-old experiment in the southern Fresno County community of Parlier is showing some interesting results.
And, officials say, chronic absenteeism isn’t the only problem the Parlier experiment may eventually solve. Like many Central Valley communities, Parlier doesn’t have enough doctors for its residents.

In 2015, Parlier Unified School District and United Health Centers partnered up to address both issues by building a federally-funded health center down the street from the elementary and high schools in Parlier.
Local leaders acknowledge it’s still too soon to declare victory but, they say, the early data is encouraging and other school districts should take notice.
“I think even a small improvement — like numbers going in the right direction — might be enough for other school districts to want to know more,” said Alma McKenry, director of health services at the Fresno County Superintendent of Schools Office.

Parlier in 2015 turned attendance into a citywide issue.
The school launched a superhero-themed campaign to promote attendance. High school students and even administrators dressed up as popular comic book characters, posters and banners went up around the city, and good attendance was rewarded with pizza parties. Brletic Elementary School students head back to class, past a poster encouraging superhero attendance, part of a campaign to boost attendance in Parlier schools. (The Fresno Bee/John Walker)

Children in the central San Joaquin Valley have some of the highest childhood asthma rates in the state. The Central Valley also has above-average rates of children living in concentrated poverty areas and uncertain or limited access to adequate food, according to Dr. Serena Yang, Chief of Pediatrics at UCSF Fresno.

So how much does a clinic’s location matter?
Dr. John Moua, a pediatric pulmonology specialist and assistant clinical professor at UCSF, said transportation is a “huge, huge, huge” issue.
“Most of my patients live within the five-mile radius of our hospital. They don’t have transportation, so they can’t go very far,” Moua said.
For asthma, early detection is key. If a child lives near a hospital and has an episode during infancy, they can develop a management regime. But the longer it takes to detect, the harder it gets to manage a chronic problem later in life.
“So what we see is kids getting in and getting prescribed breathing treatments but won’t have an ongoing treatment plan because they don’t have access in rural areas,” Pacheco-Werner said. “And because of the way land-use policies have worked, it will be the people in poverty, folks without insurance and people of color with language barriers.”
According to Yang, the statewide physician shortage will only get worse in the next few years. And as the state becomes more diverse and the majority of providers remain white, there is likely to be an even greater gap between providers and patients over cultural backgrounds and spoken languages.
However, research shows people work where they train and where they call home. So Yang believes the solution lies in creating pipelines for kids interested in medical careers, like the Junior Doctors Academy, and in pushing for more funding into residency programs and student loan forgiveness, like the CalMedForce program.
For the first time last year, UCSF School of Medicine accepted six local students into the new San Joaquin Valley Program. The tailored track allows medical students to study in Fresno and work with underserved populations in the valley, with the idea of growing the local workforce. They hope to double class size to twelve this year and eventually reach 50 students.
“It all helps,” she said. “So we need to make sure the money doesn’t stop.” Twelve-year-old twins Hailey, left, and Ashley Resendez had checkups at United Health Centers community clinic next to their school in Parlier. (The Fresno Bee/John Walker)

Are Clinics on Campus a Solution?

A federally-qualified health clinic can be a great boon at nearly no cost to the school. But getting a clinic onto a campus “is really not that easy,” according to David Phillips, community development officer at United Health Centers.
Several elements in Parlier added up to make a health center possible.
First, they had a building the FQHC was able to renovate for about $450,000.
“A lot of (school districts) are pressed for space and are growing and have other educational priorities,” Phillips said.
Parlier’s clinic — placed close to area schools — also guaranteed a robust clientele, which the FQHC needs for funding.
“Some (FQHCs) have attempted and backed away from the school-based concept because in many cases they’re cost-neutral. They’re not large enough to see a large percentage of people in the community,” he said. “We’re fortunate in Parlier to have a behavioral health office as well as a medical office, so that adds incentive for the school to work closely with the health center.”


“Some (FQHCs) have attempted and backed away from the school-based concept because in many cases they’re cost-neutral. They’re not large enough to see a large percentage of people in the community. We’re fortunate in Parlier to have a behavioral health office as well as a medical office, so that adds incentive for the school to work closely with the health center.” — David Phillips, community development officer at United Health Centers
Fresno Unified has one FQHC at Addams Elementary School, as well as a school-based health center at Gaston Middle School. Both are operated by Clinica Sierra Vista. In February 2017, Fresno Unified trustees approved a partnership with Clinica Sierra Vista and Valley Children’s Healthcare to bring six new school-based health centers to Fresno by the 2018-19 school year, but that deal fell apart.
United Health Centers is rapidly expanding, and focusing its resources on Fresno. They will be opening six new locations in Fresno, Clovis, and Dinuba later this year, in addition to a recently opened center in Reedley.
None of the new clinics will be school-based, but they are working with Fresno Unified, Phillips said, because they will be nearby to schools, including Sunnyside High School, where one proposed center fell through.
The Office of the Fresno County Superintendent of Schools is also working on solutions. In 2013, they launched a mobile health unit that offered vaccines, physicals and referrals at 12 Fresno County school districts, including Mendota, Firebaugh, and Riverdale.
They recently received another grant worth $450,000 for a new mobile unit that will branch down the Highway 99 corridor into other districts, including Fowler and Laton. McKenry, the director of health for that office, said the new unit will work with their behavioral health team to address students’ mental health as well as their medical needs.
McKenry said there will be plenty of room for more partnerships with FQHCs down the line.
“Parlier is a great example of chronic absenteeism decreasing,” McKenry said. “Once schools start seeing the benefits they’ll be more willing to sit down and talk a little more about how to make a partnership work. We’re not working in our silos anymore.”
Manuela Tobias is a journalist at The Fresno Bee. This article is part of The California Divide, a collaboration among newsrooms examining income inequity and economic survival in California.

Rediscovering America: A Quiz on the US Census