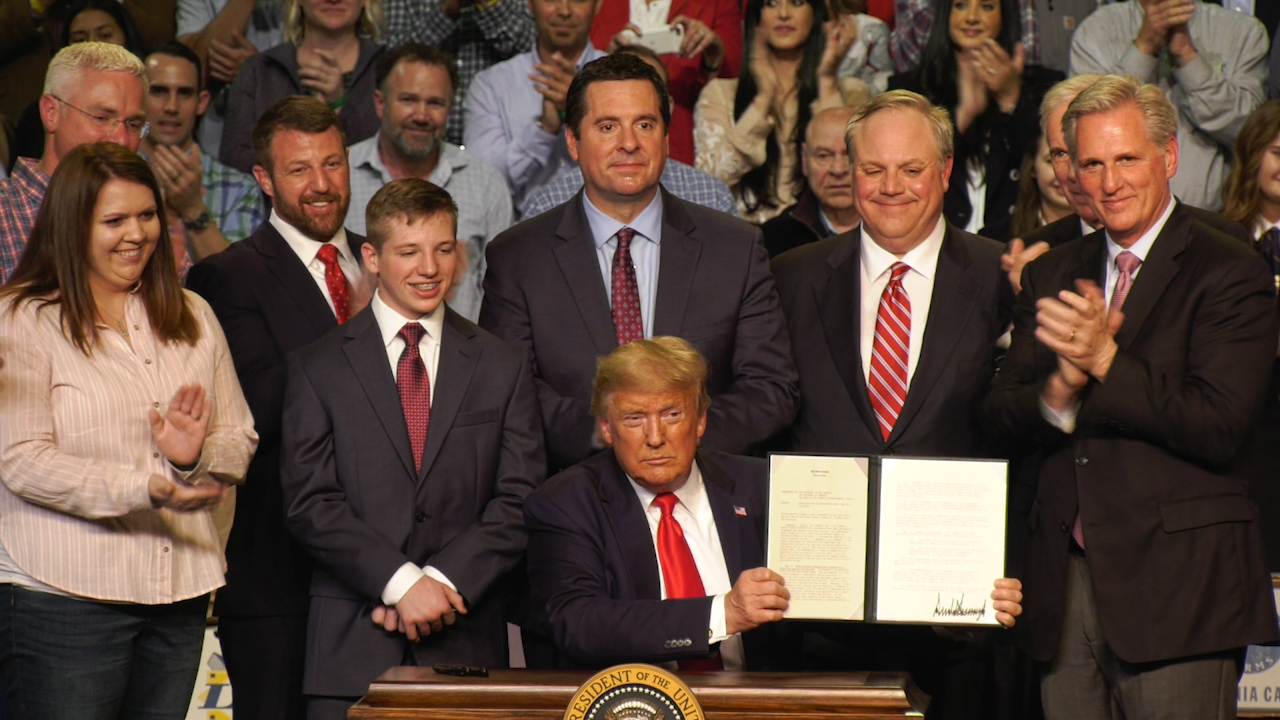 Valley Republicans and Democrats are praising President Donald Trump’s action Wednesday to send more water to California farms and cities.
Trump signed a memo during a political rally in Bakersfield on Wednesday to change environmental calculations that have limited the pumping of Sacramento-San Joaquin River Delta water to users across the state. Those earlier calculations showed fish populations to be at risk from additional pumping, which diverts water to the Valley and Southern California through aqueducts and canals.

The federal government will now use updated “biological opinions” that show more water can be pumped without threatening fish species, such as Chinook salmon and Delta smelt.

California Gov. Gavin Newsom responded by saying he will fight Trump Administration in court.
“We will file legal action in the coming days to challenge the federal biological opinions to protect highly imperiled fish species close to extinction,” Newsom said in a statement.
On Thursday, Newsom and California Attorney General Xavier Becerra filed a lawsuit in federal court in San Francisco, challenging the Trump administration’s actions.
Newsom has pushed for voluntary agreements to end the state’s ongoing water wars, involving “government agencies and water users with partnership and oversight from environmental groups.”
In a commentary for Calmatters this month, Newsom wrote: “These agreements will require adaptive, holistic management of enhanced water flows and habitats to protect, restore, and enhance California’s largest rivers and the Delta.”

On Thursday, three Valley Democratic congressmen backed the updating of biological opinions and urged that lengthy legal battles over water management be avoided.
“The biological opinions needed to be updated with better, newer science. Without the State of California and the federal government reaching a resolution on their differences, conflicting management of the Central Valley Project and the State Water Project will lead to endless litigation and court battles rather than a set of workable solutions,”  said Rep. TJ Cox of Fresno and Rep. Josh Harder of Turlock.
Rep. Jim Costa of Fresno weighed in on Wednesday after Trump signed the memorandum.
“Using adaptive management, science, and observed realities on the ground, rather than arbitrary calendar dates to determine water operations, is the right thing to do,” Costa said in a statement. “This not only allows for water to be moved more efficiently, which will help our agriculture economy, but also ensures sufficient water for habitat is available when needed for endangered species.

“Water users, the state, and the federal government must remain focused on reaching an agreement on coordinated operations of the state’s water systems. I’m hopeful this isn’t the end of these negotiations. We have the chance to start a new era of working together on water — one that benefits all sides — and we must not squander the chance.”

Republican Minority Leader Kevin McCarthy, who hosted Trump in his hometown, praised the president’s actions.
“The president stressed the critical role our farmers play in the American way of life,” McCarthy said in a statement Thursday. “He signed a memorandum that will improve access to water for California’s farmers, allowing California to remain the heart of American agriculture.”
State Sen. Andreas Borgeas (R-Fresno) also joined the chorus Thursday in calling for more water to flow to the Valley.
“The ball is now in Gov. Newsom’s court to provide clean, reliable and ample water supplies to Valley farmers and communities. The state must ensure that infrastructure and storage are a top priority. It’s simple: no water, no farms, and no food,” Borgeas said in a news release.
Click on the video above to hear how GOP figures from Fresno and Kern counties reacted to Trump’s action and Newsom’s response.

Kate Poole, senior director for water at the Natural Resources Defense Council, said in a statement that her organization “will fight for the largest estuary on the West Coast, which sustains hundreds of fish and wildlife and thousands of fishing jobs that depend on a healthy Bay-Delta. The Newsom administration has the tools it needs to protect California from Trump’s latest assault on the environment, and we’re looking forward to working with the governor to do so.”