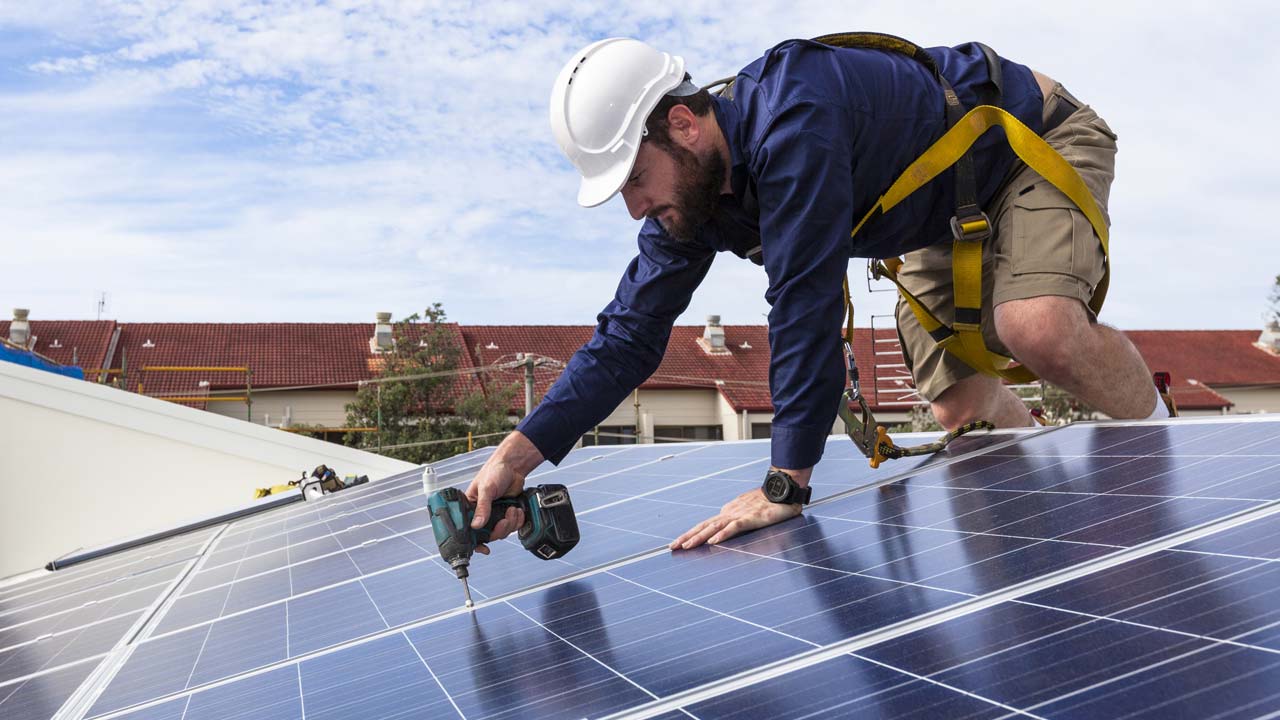 When California finalized the nation’s first sweeping rooftop solar mandate for new construction last year, advocates pictured a utopia of all homes being built with solar panels, turning the clunky panels into the new norm to help the state achieve carbon neutrality.
But those images of self-sustaining abodes may have been dashed today after the California Energy Commission voted unanimously to allow a Sacramento utility to substitute power from a large solar farm to meet the state’s home energy goals.

The mandate that took effect Jan. 1 calls for new single family houses or low-rise apartments to install solar panels. Alternately, utilities and organizations may apply to the California Energy Commission to build an offsite”community shared solar” site for buildings to draw from.
Seizing on that latter option, the Sacramento Municipal Utility District wants to build its own solar farms on a grand scale for homeowners to tap into, allowing new homes to forego installing their own solar panels and preventing increased construction costs.

The energy commission’s approval of the utility’s idea may now set a blueprint for private and public entities to seek their own large solar sites to meet the mandate, watchers say. The largest public utility in the U.S., the Los Angeles Department of Water & Power, endorsed the idea in filings to the commission. Many construction groups backed it too.

Prior to the meeting, environmentalists said approval from the commission would amount to an about-face after its five members unanimously passed the solar rooftop mandate in 2018. At the time, the commission estimated solar panels would increase construction costs by $9,500 for a single family home but said owners would save about $19,000 over 30 years.
“The result will be the end of the solar homes mandate before it even started,” said Dave Rosenfeld, director of Solar Rights Alliance, which mobilized hundreds of homeowners to send letters opposing approval.
In an indication of the case’s far-reaching effects, a bipartisan group of 16 Assembly members and 16 senators representing districts statewide signed onto a letter from Sen. Richard Pan endorsing the plan. They say not all home buyers can afford houses with solar panels.
The SMUD proposal “allows builders, developers, and prospective homebuyers an alternate option should they determine that rooftop solar is not the best or most economical way for them to receive renewable generation,” wrote Pan, a Democrat from Sacramento.

Homes would still be powered by clean energy from the sun. But environmentalists warned the spirit of the law would be lost after California 2 months ago hit the milestone of 1 million solar roofs. They argued that more rooftop panels would put California on firmer footing to meeting its 2045 goal of receiving all electricity from renewable sources.
“Every time someone sees a solar roof in their neighborhood, or on their school or when they drive around, that gives them hope that we can solve this climate crisis,” said Dan Jacobson, director of Environment California. “I think that in Sacramento, bureaucrats tend to forget that.”
Rooftop solar panels also ensure a home could power itself with the help of batteries even during an electrical shutoff in a state dealing with years of upcoming power blackouts to prevent wildfires.
SMUD countered that homeowners can still apply with the utility to install rooftop solar panels if their energy use demands it. Ed Hamzawi, director of advanced energy solutions at SMUD, also said some builders will still insist on installing their own solar panels because “there is a customer demand.”
“We think those two issues are overblown,” he added.

After the commission put off a decision last November, SMUD filed a revised proposal in January that would ensure all the renewable power for its program comes from local sources, which won the support of the commission’s staff.
The utility,which serves 1.5 million residents in Sacramento County and parts of neighboring counties, also doubled the guaranteed financial benefit to participating homeowners to $10 kW per year.
Mark Hanson, director of a project that is building 8,000 residences in eastern Sacramento County, said allowing utilities to build a massive solar program is more efficient than putting a panel on every home. His project, Cordova Hills, is planning a 100-acre solar farm onsite but also would like to tap into Sacramento utility’s program as a fallback, he said.
“On cloudy days, the solar’s not going to produce as much,” he said. “And so we need a backstop.”
GV Wire contributed to this report.

Related Topics:California energysolar power
Up Next