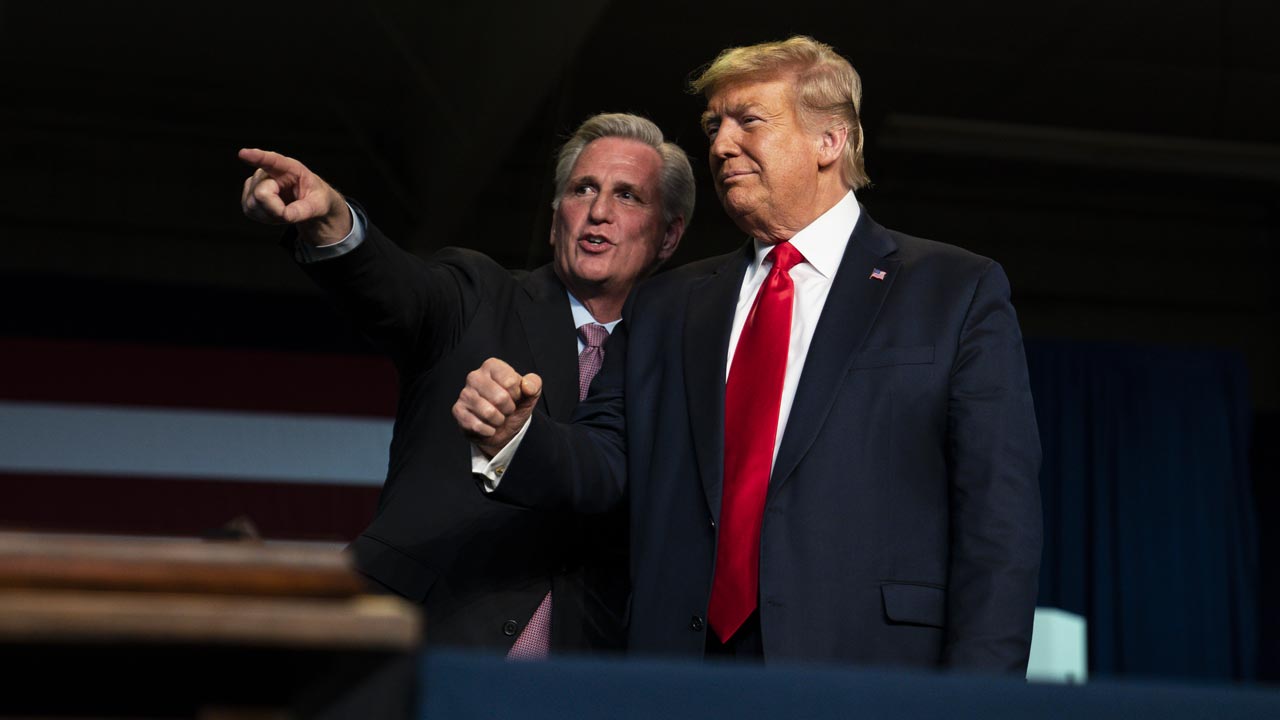 More water will flow toward San Joaquin Valley farmers, President Donald Trump declared at an event in Bakersfield on Wednesday afternoon.
Trump announced the completion of biological opinions that will increase water allocations in Californians.
“A major obstacle to providing more water for the region’s farmers has now been totally eliminated by the government,” Trump said.
Several thousand invited guests attended the event at the JACO Hangar at Meadows Field Airport.

However, Gov. Gavin Newsom said before Trump’s announcement that he plans to sue the Trump administration over its plans to increase water deliveries to the Valley.
Newsom’s announcement may just be a gambit to increase the state’s leverage. The governor has acknowledged that California farmers need more water.
“We remain committed to working to resolve these remaining differences in (the) coming weeks and months,” Newsom wrote in a letter sent to Interior Secretary David Bernhardt earlier this week. Water for the Valley

Trump recounted a story told on the campaign trail about why the fields along Highway 99 were so brown. He was amazed when told by Rep. Devin Nunes (R-Tulare), it wasn’t because of a drought.
In 2018, Trump signed a memorandum outlining water supply goals for areas such as the Valley.
At today’s event, Trump officially signed a follow-up Presidential Memorandum on Developing and Delivering More Water Supplies in California.
The new memo will build upon the findings from before and “help develop and deliver water supplies in the Central Valley,” according to a White House news release.
“You need the water, it’s really that simple,” Trump said.
Some of what the memo would do is implement the biological opinions that should increase flows from the Delta down south to the Valley and Southern California. 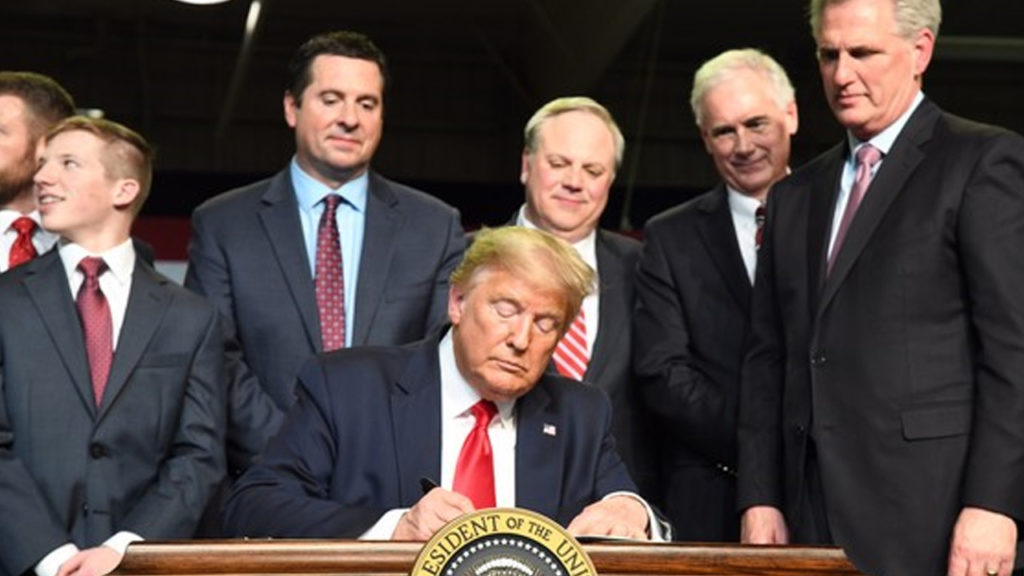 Speaking to GV Wire after the speech, House Minority Leader Kevin McCarthy (R-Bakersfield) said he liked what he heard.
“He updated the science. It’s old science. It protects the fish. It allows more water to flow in an environmentally sound way,” McCarthy said. “It gets more water down south for the residents in L.A., for the farm communities in the Central Valley.”
During his speech, which resembled one of his campaign rallies, Trump talked about taking back the House of Representatives for Republicans, and the need to “get rid of Pelosi.”
If the Republicans regain the majority, McCarthy could become Speaker of the House.
“We only need 18 seats to win the majority. That’s not much, but we got to go out there and work,” Trump said.

The audience stood waiting in an airport hanger for nearly four hours, listening to the usual Trump event rotation of Rolling Stones songs, interspersed with other patriotic and classic rock themes. Given the locale of Bakersfield, one might have expected some Merle Haggard or Buck Owens mixed in. But the songs of those country music legends weren’t heard.
Just before 3 p.m., Trump emerged to an enthusiastic crowd and the sounds of “Bless the USA” by Lee Greenwood. The crowd chanted “USA, USA.”
Trump heaped praise on Nunes and McCarthy at the beginning of his speech.
When Trump knocked the city of San Francisco and Speaker of the House Nancy Pelosi (D-San Francisco), the crowd yelled its approval.

Trump also alluded to recent comments made by Democratic presidential contender Mike Bloomberg about farming in 2016.
“Mini Mike hates the farmer,” Trump said.
In audio released this week from a 2016 speech, Bloomberg said farming was a simple as digging dirt, putting in a seed, and watering.
Trump used many of his oft-said lines knocking everything from High-Speed Rail (to the boos of the crowd at its mere mention), to “Fake News CNN.”

Bakersfield a Better Option Than Sacramento

GV Wire spotted at least two members of the state Legislature who chose to hear President Trump rather than Gov. Gavin Newsom deliver his second State of the State address in Sacramento.
“I’d much rather hear the president talk about how we are going to get water to people that grow the food than have to sit through another pompous speech by our governor,” Assemblyman Jim Patterson (R-Fresno) said.
Sen. Shannon Grove (R-Bakersfield) put it simply: “The president is in my district and in our community.”
Both Patterson and Grove expressed excitement about the potential of more water, up to 1 million acre-feet, coming to Valley farmers.

Former Congressman David Valadao (R-Hanford), who is running again this year, said he was there in 2018 when Trump signed an executive order allowing for more water for the Valley.
“To see this come to fruition is very important. I’m excited because it’s actually going to deliver (water) to Fresno and the Central Valley,” Valadao said.
Trump acknowledged Valadao during his speech, pronouncing his name correctly, unlike Vice President Mike Pence at an event last year near Lemoore.
When Democrat TJ Cox of Fresno defeated Valadao for the 21st District Congressional seat, Valadao’s association with Trump was an issue. He downplayed that connection.
“The sad thing is, everyone is going to focus on the politics. We got to focus on what is going on the ground. This is beneficial to the Central Valley,” Valadao said.

Guests Were by Invitation Only

The guests were by invitation only, sent out mainly through email. That fact and the isolated location at the airport ensured a hangar full of Trump supporters.
Jimmy, a Bakersfield resident, wore his red “Make America Great Again” hat. He received one from a friend of his, who in turn was invited by McCarthy.
“I just came out to support the farmers. They’re having a lot of problems,” Jimmy said, with his daughter Ava wearing a Wonder Woman dress by his side.
Ava added, “President Trump is nice. He’s thoughtful.”

In addition to dozens of law enforcement personnel operating at every level, many volunteers helped with the event.
Volunteers guided traffic into the area, greeted people and ushered them inside the hangar.
Cathy Miller had a sweet opportunity to volunteer her services. The owner of Tastries Bakery, a gourmet cookie maker, stood in front of the hangar entrance, distributing 4,000 cookies and macaroons.
“It’s important to be nice. Nice matters,” the self-described Trump supporter said. “I’m happy he’s here. California needs a little bit of Trump.”
In recent years, Miller was sued because she refused to bake a wedding cake for a same-sex couple.
Another volunteer handed out bags of locally-grown carrots. The cookies were far more popular.