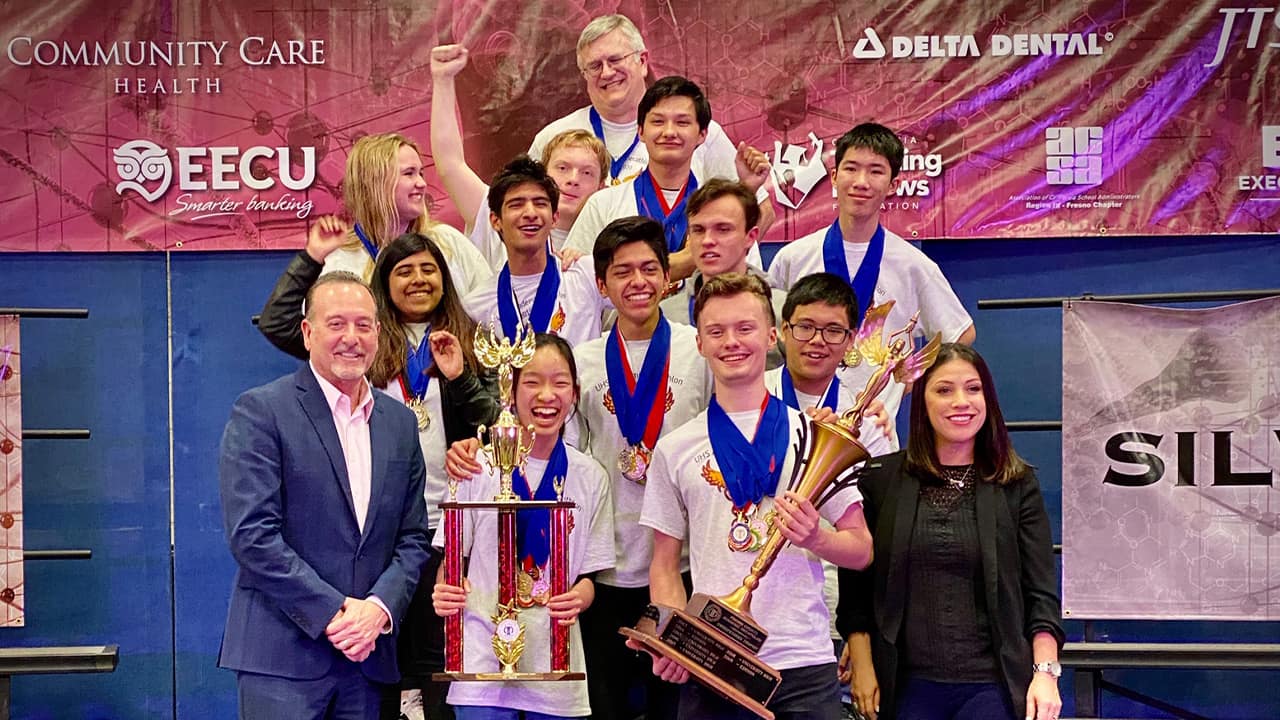 Nancy Price
School Zone
Last year’s champion, Edison High School, came in 13th place.
Academic Decathlon is a “brain bowl” for students who compete in different divisions, depending on grade-point average, in 10 examination categories such as essay, language and literature, mathematics, science, and interview.
The theme for this year’s event is “In Sickness and Health: An Exploration of Wellness and Illness.”

State Championship Will Be in Late March

University High’s team will compete in the California State Decathlon March 27-28 in Sacramento. State champions will go on to the U.S. Academic Decathlon, which this year will be April 30-May 2 in Anchorage, Alaska.
More than $8,000 in scholarships were awarded to participants in the county competition. Edison High student Vanessa Pastlan won the Dean’s First Place scholarship of $1,250 after scoring 8,547 points. University High students Olivia Linn and Gannon Murray were awarded the Dean’s Second Place ($750) and Third Place ($500)  scholarships.
This year’s win marks the eighth for University High, now tied with Roosevelt High School for the second-highest number of county Academic Decathlon championships. Edison High leads with 19 wins. The first county champion? Roosevelt High, in 1983.

Dead trees in the Sierra are worrisome because there are so many of them, and because they are so frighteningly flammable.
But help is on the way.
The California Department of Forestry and Fire Protection has awarded a $1,675,200 grant to the Central Valley Forestry Corps to train 100 new forestry technicians and expand the advanced forestry training program at Reedley College.
The Central Valley Forestry Corps is a partnership of the Fresno Regional Workforce Development Board, the Fresno Economic Opportunities Commission Local Conservation Corps, and Reedley College.

The grant, which will help quicken the pace of dead tree removal in Fresno County forests, provides advanced forest health tree removal certification training. Participants can earn six different certificates, including wildland fire training and wildland power saws.
The grant also brings additional training equipment to the college, including a Ford F-550 service tow rig cab and chassis, mulcher, and grapple rake.
Those interested in the no-cost training can register at www.SierraTree.org or call 1-844-490-7130.
The program will include on-the-job training at Camp Sequoia Lake, where the college’s Forestry Program has managed the 800-acre forest for decades.

Chawanakee Academy Charter School in Madera County is one of six California schools and 100 winners nationally in the 10th annual Samsung Solve for Tomorrow Contest, which challenges students in grades six through 12 to develop solutions to community issues using STEM (science, technology, engineering, and math) skills. Each state winner will receive $15,000 in technology and classroom materials and advance in the contest.
Chawanakee teacher Matt Gehrett asked students in an enrichment class what issues they could tackle, and one student responded: Air quality during wildfires.
“What we’re proposing is to create not just a face mask, but a smart face mask,” said Gehrett, who also is an associate professor and program director of educational technology at Fresno Pacific University.

In addition to a filter, the mask would have a microprocessor to alert wearers as to what was in the air and when the mask should be worn.
The next step for the students is to build a prototype and make a three-minute video that showcases their project in action.
If Chawanakee’s project is selected among the top 20 in March, students will travel to New York City for the National Finalist Pitch Event and the chance to be one of five grand prize national winners who will get $100,000 in technology and classroom materials. They also will travel to Washington, D.C. to present their project to members of Congress.

Award-winning mariachi performers Yvette Sital and Ramiro Benavides from Las Vegas will conduct a mariachi clinic for Madera Unified students on Saturday, culminating with a free concert that will be open to the public.
The first-ever clinic is being held by Madera Unified’s Visual and Performing Arts Department and was organized by academic coach Sandra Kelly to provide students with feedback while exposing them to new techniques and new music.
Students from mariachi groups at Madera South High School, Martin Luther King Middle School, and Kerman High School are scheduled to attend the clinic, which starts at 8 a.m. Saturday at Madera South, 705 W. Pecan Ave.
The free concert will conclude the clinic and will feature performances by all 75 student-musicians.

Fresno Unified School District honored 46 finalists and announced five winners during its annual Excellence in Education awards ceremony on Tuesday at Hoover High School.
The finalists were nominated by their peers for going above and beyond in serving students and the district.
The winners were: