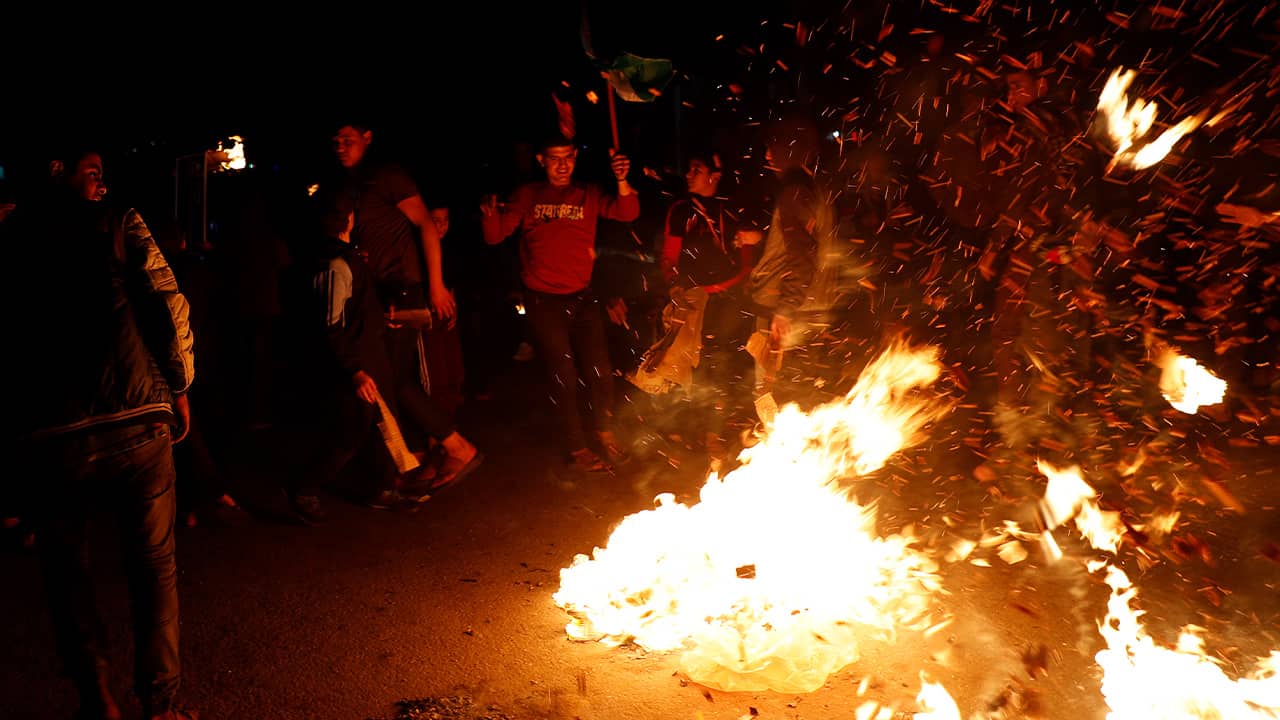 The Palestinians Seek All of the West Bank and East Jerusalem

The ceremony came amid Trump’s impeachment trial and a U.S. election year, and after Netanyahu was indicted on counts of fraud, breach of trust and bribery in three separate cases. The longtime Israeli leader, who denies any wrongdoing, also faces a March 2 parliamentary election, Israel’s third in less than a year.
The Palestinians seek all of the West Bank and east Jerusalem — areas captured by Israel in the 1967 Mideast war — for an independent state and the removal of more than 700,000 Israeli settlers from these areas.
But as details emerged, it became clear that the plan sides heavily with Netanyahu’s hard-line nationalist vision for the region and shunts aside many of the Palestinians’ core demands.
Under the terms of the “peace vision” that Trump’s son-in-law and senior adviser Jared Kushner has been working on for nearly three years, all settlers would remain in place, and Israel would retain sovereignty over all of its settlements as well as the strategic Jordan Valley.
The proposed Palestinian state would also include more than a dozen Israeli “enclaves” with the entity’s borders monitored by Israel. In addition, the areas of east Jerusalem offered to the Palestinians consist of poor, crowded neighborhoods located behind a hulking concrete separation barrier.
Trump acknowledged that he has done a lot for Israel, but he said he wanted the deal to be a “great deal for the Palestinians.” Thousands of Palestinians Protested in Gaza City, Burning Pictures of Trump and Netanyahu

He said his vision gives the Palestinians the time needed for them to meet the challenges of statehood.
The only concession the plan appears to demand of Israel is a four-year freeze on the establishment of new Israeli settlements in certain areas of the West Bank. But Netanyahu clarified later that this only applied to areas where there are no settlements and Israel has no immediate plans to annex, and that he considered the plan to impose no limitations on construction.

Tuesday’s Developments Set the Contours for His Election Campaign

But the many caveats, and ultimate overall Israeli control, made the deal a nonstarter for the Palestinians.
Netanyahu and his main political challenger in March elections, Benny Gantz, had signed off on the plan.
“Mr. President, because of this historic recognition and because I believe your peace plan strikes the right balance where other plans have failed,” Netanyahu said. “I’ve agreed to negotiate peace with the Palestinians on the basis of your peace plan. It’s a great plan for Israel. It’s a great plan for peace.”
Tuesday’s developments set the contours for his election campaign.
Netanyahu will highlight his close relationship with Trump and the “historic opportunity” provided by the peace plan, while Gantz will focus on Netanyahu’s legal woes. Netanyahu will soon go on trial for a series of corruption charges.
The Jordan Valley annexation plan is a big part of Netanyahu’s strategy. Annexing West Bank land is a key promise meant to appeal to his hard-line nationalist base.
U.S. officials, speaking on condition of anonymity ahead of the plan’s release, said they expected negative responses from the Palestinians, as well as Turkey and Iran, but were hopeful that Jordan and Egypt, the only two Arab nations to have peace treaties with Israel, would not reject it outright.
Jordan gave the plan a cool reaction, saying it remained committed to a two-state solution based on Israel’s pre-1967 lines. It also said it rejected any unilateral move by Israel, referring to the annexation plan. Egypt, the first Arab country to reach a peace deal with Israel, urged Israelis and Palestinians to carefully study the plan. The European Union also said it needed to study it more closely.
Officials said they expected Gulf Arab states like Saudi Arabia, the United Arab Emirates and others to cautiously welcome the plan.
Arab League chief, Ahmed Abuel-Gheit said the Palestinian reaction would define the Arab response. He spoke after meeting with Palestinian official Jibril Rajoub at the Arab League headquarters in Cairo.
The reaction of Jordan, which would retain its responsibilities over Jerusalem’s al-Aqsa Mosque under the plan, is particularly significant, according to the officials, who said Kushner and others were reaching out to Arab leaders ahead of the rollout.
The Palestinians see the West Bank as the heartland of a future independent state and east Jerusalem as their capital. Most of the international community supports their position, but Trump has reversed decades of U.S. foreign policy by siding more blatantly with Israel. The centerpiece of his strategy was recognizing Jerusalem as Israel’s capital and moving the American Embassy there. He’s also closed Palestinian diplomatic offices in Washington and cut funding to Palestinian aid programs.
Those policies have proven popular among Trump’s evangelical and pro-Israel supporters.
But the Palestinians refuse to even speak to Trump and they called on support from Arab leaders. The Palestinian leadership also has encouraged protests in the West Bank, raising fears of a new round of violence. Ahead of the announcement, the Israeli military said it was reinforcing infantry troops along the Jordan Valley.