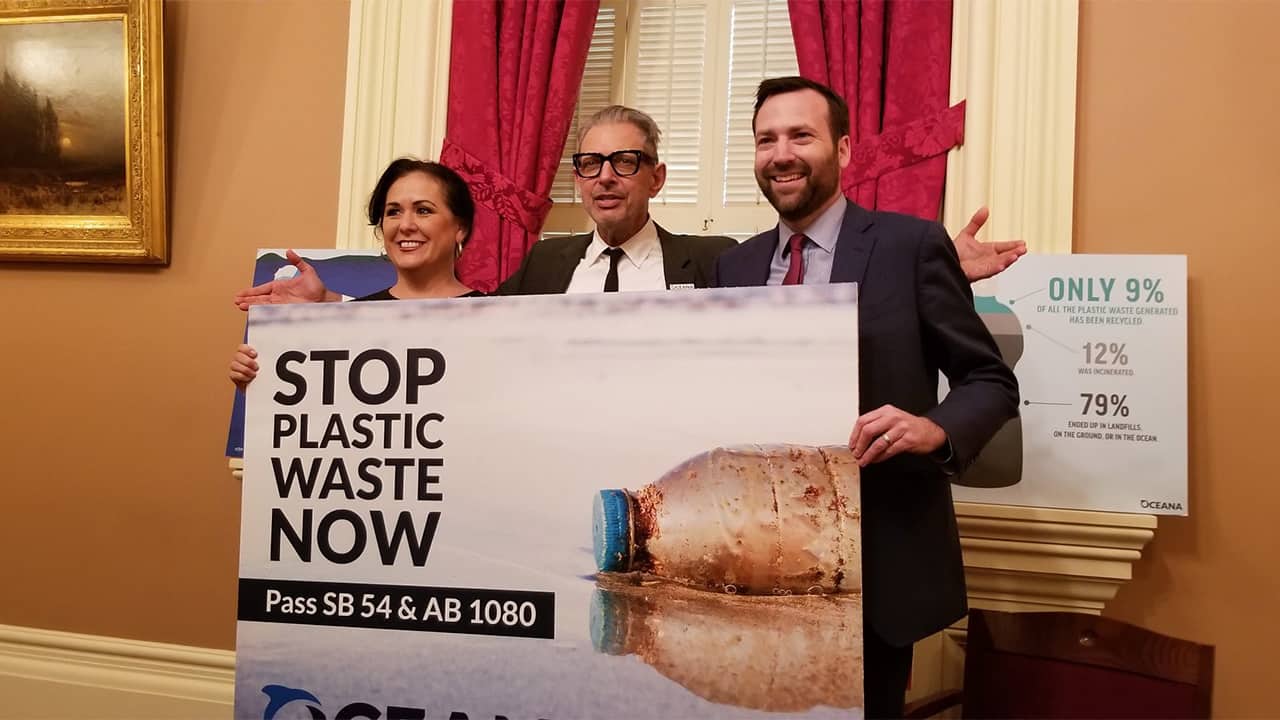 
“I feel like we’re on the brink of accomplishing something.” — Jeff Goldblum
Environmental groups hail the proposal as a landmark attempt to cut down on 75% of waste from plastic items like takeout boxes, food containers and utensils. The bills aim to achieve the target within a decade.
“I feel like we’re on the brink of accomplishing something,” Goldblum said, likening the proposal to President John F. Kennedy’s 1961 moon shot speech.
The two bills, one in the Assembly and another in the Senate, would require companies to reduce single-use packaging as much as possible by 2024 and ensure products made or imported into California after 2030 are recyclable or can be composted.
Both stalled last year amid heavy opposition from business, agriculture and packaging industry groups. They argued the restrictions on single-use plastics are vague and would burden manufacturers. They also say it gives the state recycling department, CalRecycle, overly broad authority to establish new requirements for businesses.
Goldblum and advocates met with representatives from Democratic Gov. Gavin Newsom’s office and lawmakers at the Capitol. They delivered signed letters in support from January Jones, Ted Danson and other actors and activists.

Advocates say the regulations would be a blueprint for enacting similar measures across the country. The proposals follow recent California efforts to restrict the use of single-use plastic straws in sit-down restaurants and to limit plastic bag waste at grocery stores.
Given California’s status as the fifth-largest economy in the world, the new rules would “force companies producing plastic worldwide to adjust their practices,” said Geoff Shester, a director with Oceana, an organization that advocates for clean ocean waters.
Producers that violate the regulations would face civil fines of up to $50,000 for each day of noncompliance.
Goldblum is a musician and actor who starred in “Jurassic Park” and over a dozen films. He said he tries to personally cut down on his use of plastics by carrying his own shampoo when traveling to avoid using hotel bottles.
“I’m sure today I’ve seen a plastic bottle or two of water, but I try to clean up my act wherever I can,” he said.