McEwen: Give Peace a Chance, but How Do We Get It With Iran? 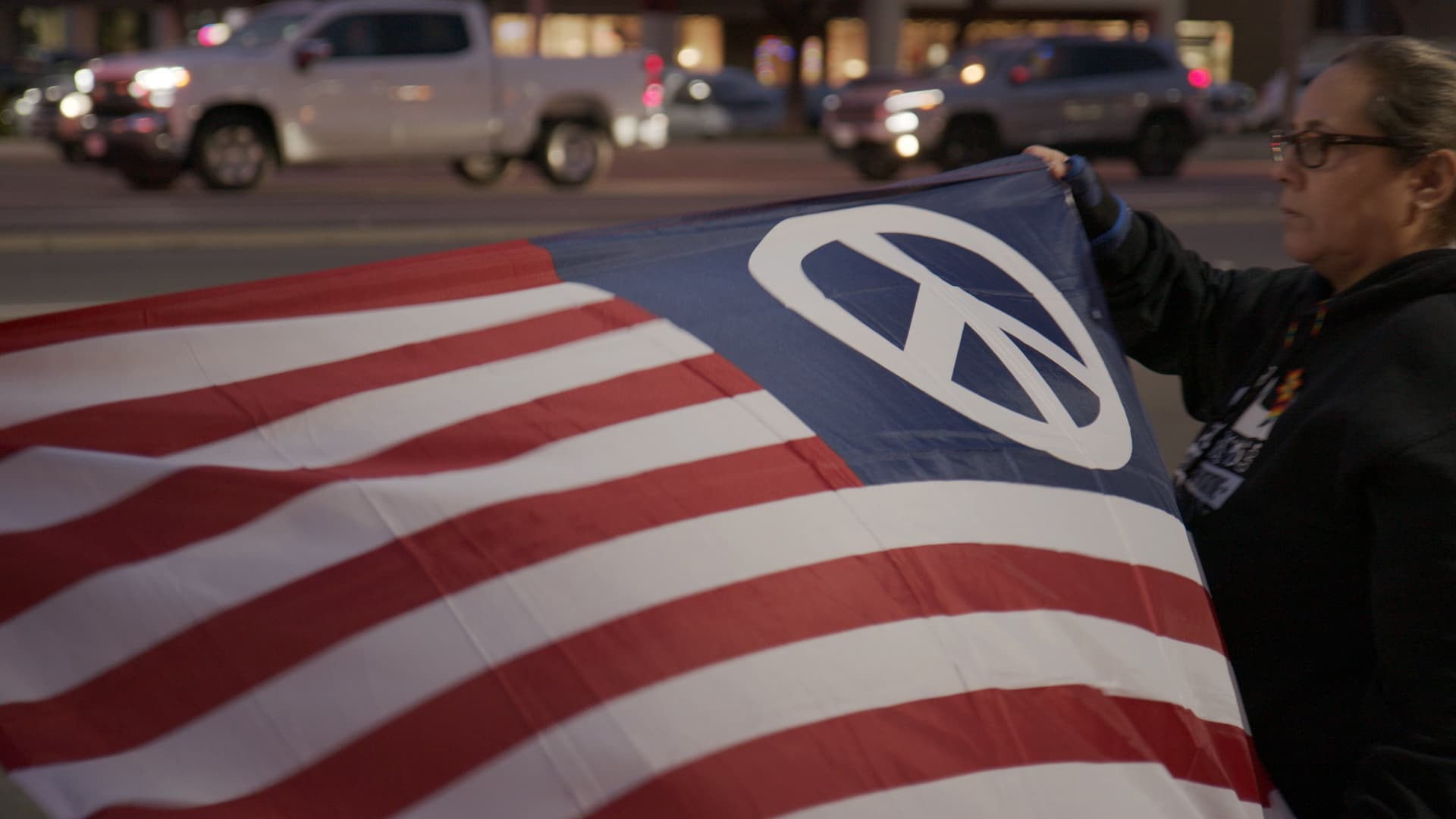 About 75 people assembled on a northeast Fresno street corner on a cold Thursday evening to urge that the United States avoid a war with Iran at all costs.
At exactly the same time, in Toledo, Ohio, President Donald Trump addressed a crowd of 8,000 at a campaign rally. As president, Trump said, he needn’t inform Congress of planned military action — his decision to kill Iranian Gen. Qassem Soleimani, in particular.

Is There a Path to Better Relations With Iran?

There you have it, two opposing sides of the coin bearing the American motto, e Pluribus Unum — “out of many, one.”
However, President Trump faces the same challenge as every American, from the most fervent hawk to the most dedicated pacifist.
With the path to eased U.S.-Iran tensions buried under the rubble of mistrust and deadly mistakes made by both sides in the 67 years since the CIA removed Iran’s democratically elected leader, Mohammed Mossadegh, how do we find it?
While interviewing Peace Fresno members and others carrying signs such as “No War With Iran” and “Murder Not in my Name,” I saved the hardest question for last.
“Given that Iran is the world’s leading sponsor of terrorism and a huge funder of groups such as Hezbollah, Hamas, and Islamic Jihad, how exactly is the United States supposed to promote peace in the Middle East?”
Mostly, I got crickets.
Some retreated to yes, Iran is a bad actor, but the United States has blood on its hands, too. Especially in the pursuit of oil.
OK. But knowing this doesn’t make the world safer — unless it informs us about how best to move forward. 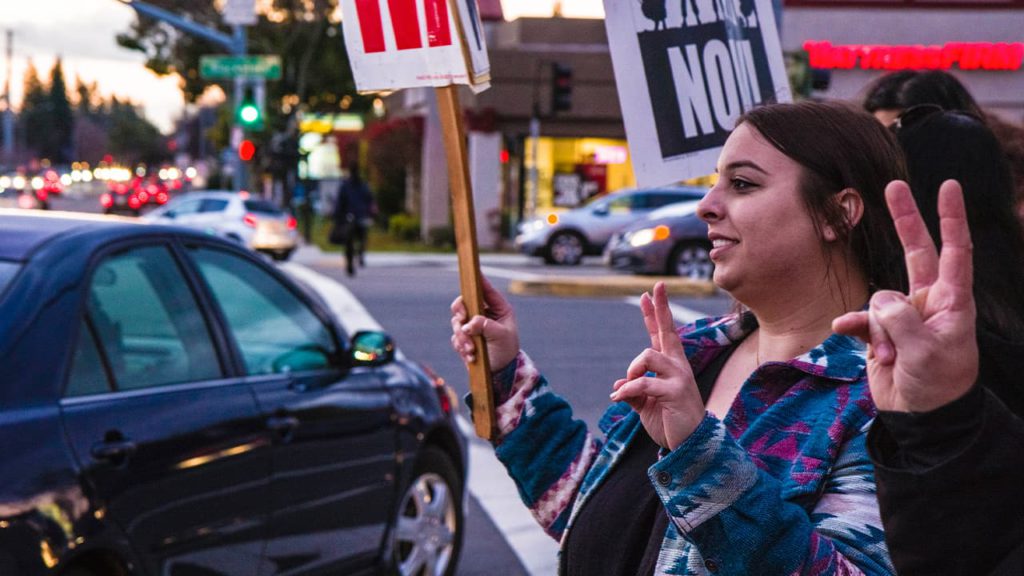 The most clearly articulated answer came from Jeff Crow, who supports Trump and wore a Devin Nunes 2020 baseball cap to the rally. Crow said he showed up to remind the protesters that the U.S. is not at war with Iran.
“I have a number of friends in the Peace Fresno group and I think we all can concur that we don’t want a war with Iran. A war with Iran would be extremely destructive,” Crow said.
So, how do we avoid war if Iran continues its strategically executed belligerence and deadly actions?
Killing Soleimani was a good start because it demonstrated to Iran that there are consequences to its actions, Crow said. After that, “more economic sanctions.”
Indeed, the Trump administration ratcheted up economic sanctions against Iran on Friday. They could cost the regime of Iran’s supreme leader, Ayatollah Ali Khamenei, and his allies billions of dollars. The sanctions aim to eliminate access to the U.S. financial system by Iran’s ruling class.
The problem is, sanctions have been tried by many presidents before and they rarely work. Exhibit A: North Korea.
Besides, Team Trump might kick-start a better relationship with Iran by rejoining the multinational agreement negotiated by the Obama administration. You know, the one in which Iran agreed not to pursue the nuclear bomb in trade for relaxed sanctions. That said, I doubt that the president’s resentment of President Obama or his stick-without-a-carrot negotiating style would allow it. 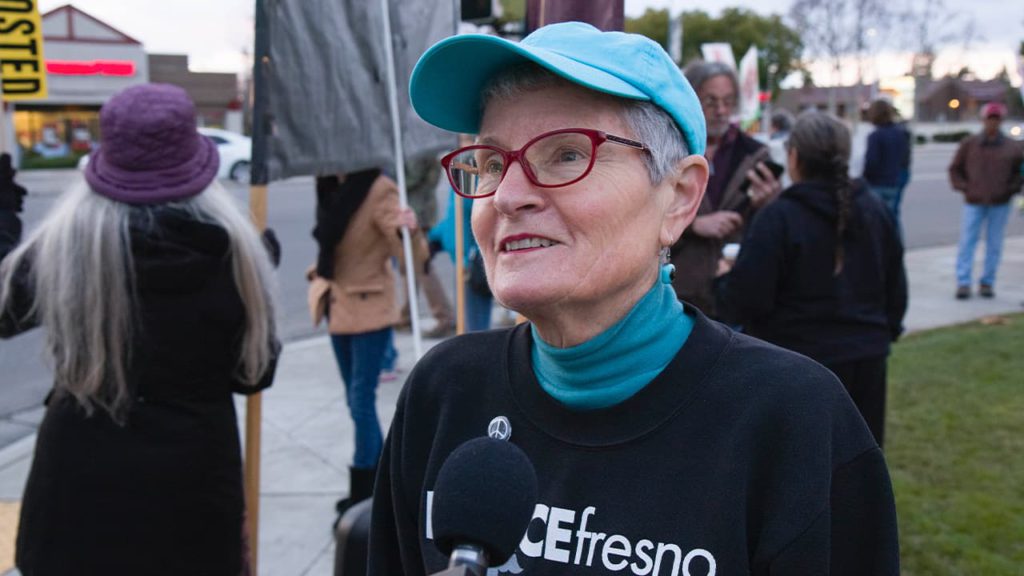 Peace Fresno has about 125 members, according to Camille Russell, a retired teacher and longtime activist. Judging by the honks of support from cars driving past Thursday’s event, many Fresnans are hoping that Iran doesn’t explode into another Vietnam, Iraq, or Afghanistan war.
Something else to know: Peace Fresno members don’t discriminate. They show up for protests at the offices of Republican and Democratic politicians alike.
Just ask Rep. Jim Costa, who has incurred Peace Fresno’s wrath for voting against ending U.S. financial and military support for the war in Yemen. Russell once penned a piece blistering Obama for sending 30,000 additional troops to Afghanistan.
“It was regretful to watch President Obama shatter the hopes and dreams of the millions of Americans who elected him last year,” Russell wrote in an article accompanied by a photo illustration cooked up by Dixie Salazar. It depicted the president with a Nobel Peace Prize around his neck and a button on his shoulder declaring “War Is Peace.”

Yes, give peace a chance.
Even though there’s a snowball’s chance in hell that Iran’s theocratic regime — not to be confused with the many millions of Iranians who want democracy and admire America — will soon change its bloody ways.