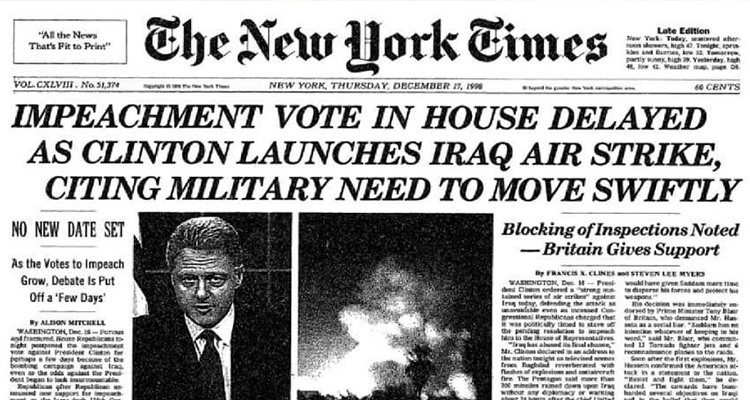 The New York Times: TimesMachine Subscription
President Clinton ordered a ”strong sustained series of air strikes” against Iraq today, defending the attack as unavoidable even as incensed Congressional Republicans charged that it was politically timed to stave off the pending resolution to impeach him in the House of Representatives.
”Iraq has abused its final chance,” Mr. Clinton declared in an address to the nation tonight as televised scenes from Baghdad reverberated with flashes of explosions and antiaircraft fire. The Pentagon said more than 200 missiles rained down upon Iraq without any diplomacy or warning about 24 hours after the chief United Nations inspector reported that President Saddam Hussein was again thwarting the inspectors’ work.
The Associated Press reported from Baghdad that Mr. Hussein in a statement broadcast in Iraq early Thursday called on the Iraqi people to ”fight the enemies of God, enemies of the nation and enemies of humanity. God will be only our side and disgrace will be theirs, now and on the day of the judgment.”
As Mr. Clinton spoke, House Republican leaders, yielding to the eruption in the Iraq crisis, postponed their plans to begin on Thursday the debate leading to the second impeachment vote in American history.
Read More →

With Iran, the US Chose Conflict Over Peace

All Iranians Can Agree on One Thing: No One Wants a War