In Fresno, Steyer Says He's the One to Beat 'Fake' Trump 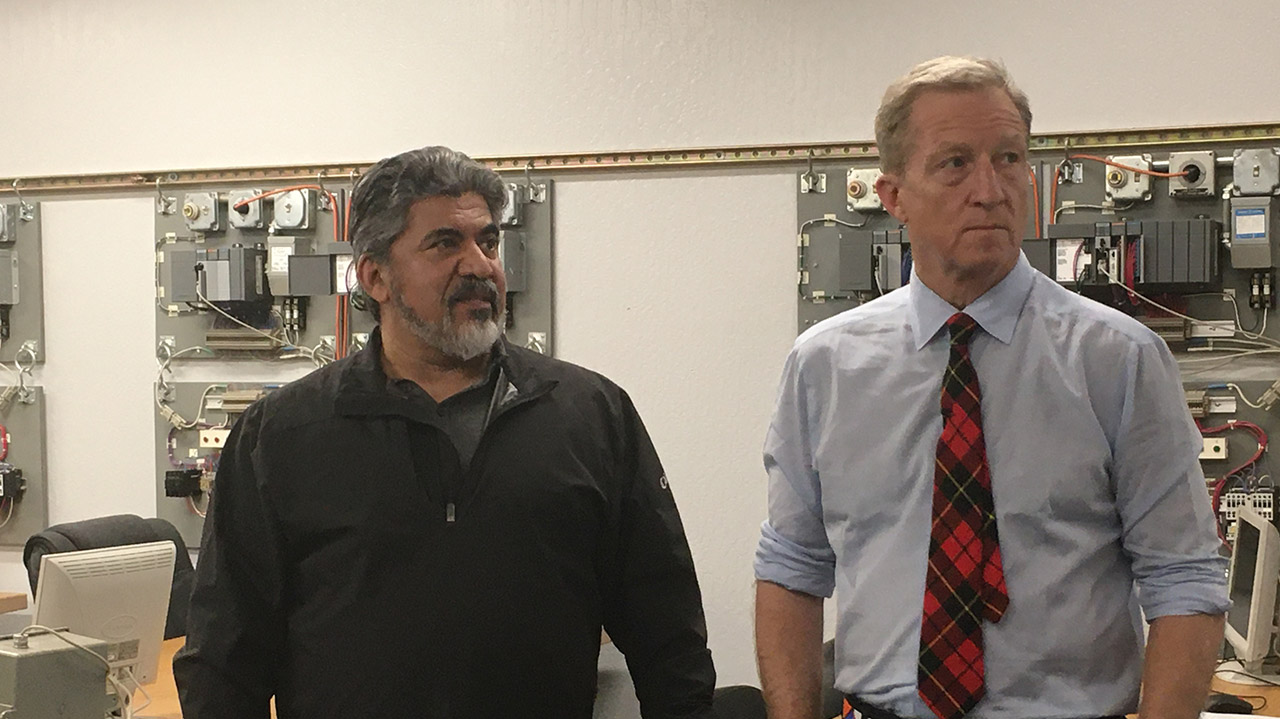 Tom Steyer says he is the Democrat who can defeat President Donald Trump.
The self-described progressive presidential candidate campaigned in Fresno on Monday, all the while dismissing his low polling numbers.
“(Trump) is going to run on his economic record. I spent 30 years building a business from scratch. He’s a fake,” Steyer said. “He’s a failed businessperson. He’s a fake president. I can go on stage and take him down on that.”
He added that conventional politicians do not do well against Trump.
Labor leader Chuck Riojas and IBEW Local 100 leader Ronny Jungk hosted Steyer on a tour of an electrician training facility near the airport. Afterward, Steyer met with labor, business, and elected leaders for a roundtable.

Steyer vs. the Polls

Steyer, the billionaire industrialist from San Francisco, entered the race in July. Before that, he funded a campaign urging Congress to impeach Trump. Steyer is also one of the top political contributors to Democratic causes.
Steyer has spent $83 million on his campaign thus far, including nearly $55,000 for Fresno area TV ads.
His polling, though, is at 1.5% in the RealClear Politics national average. Steyer dismissed those numbers, saying they are the results of national polling — not state-by-state polls.
“I’ve spent my time, and my money, and my effort in the early primary states (Iowa, South Carolina, New Hampshire, Nevada) where I’m double digits,” Steyer said.
However, according to a summary of state polls collected by FiveThirtyEight, the highest he tallied was 8% in South Carolina during a November survey.

End of the Reagan Revolution?

As to which direction the Democratic party will pull — to the socialist left like candidates Bernie Sanders and Elizabeth Warren, or toward the center like Joe Biden — Steyer said that would be up to the voters.
“This is going to be a generational change election. The way that we will know that is, turnout will be the highest in anybody’s experience,” Steyer said.
He hopes to turn the page on what he called the failed conservative Ronald Reagan revolution of the 1980s.
“We’re going to have a government that serves the American people. Is that a change? That is a huge change,” Steyer said.

No Guns in Public

Asked about the weekend shooting at a Texas church, where a gunman killed two people before being shot dead by a gun-carrying church member, Steyer said he has been consistent with his gun-control policies.
He said he respects Second Amendment rights while calling for mandatory background checks, banning “assault” weapons and high capacity magazine sales, and voluntary gun buybacks.
“In states like California with stricter gun laws, there is less gun violence,” Steyer said.
Even with the Texas situation, where a voluntary security team member is credited with preventing more bloodshed, Steyer opposes guns in public places.
“I am not in favor of concealed carry weapons in public places,” Steyer said. “My attitude is fewer guns in society.

Steyer said House Speaker Nancy Pelosi (D-San Francisco) “deserves all our support” in delaying the transmission of the impeachment vote to the Senate.
He shares Pelosi’s concern that the Senate would not conduct a fair trial.
“I want the Senate to start the trial tomorrow … but I want it to be with people testifying under oath. I’m not worried about the senators,” Steyer said. “I want the American people to learn the truth about the most corrupt president in American history.”

Steyer is also scheduled to meet supporters tonight at the opening of his first California campaign office outside his San Francisco headquarters. The Fresno office is at Bullard and Fresno streets.
“Fresno is the center of the Valley. It is the fifth-biggest city in California. Of course, we are going to have an office in Fresno,” Steyer said.
Steyer is the fourth 2020 Democratic presidential candidate to stop in Fresno. Julian Castro, Pete Buttigieg, and Bernie Sanders were here previously.
Sanders also has a Fresno office, located downtown.