Anti-Dyer Video Is Out. What Does Former Police Chief Say? 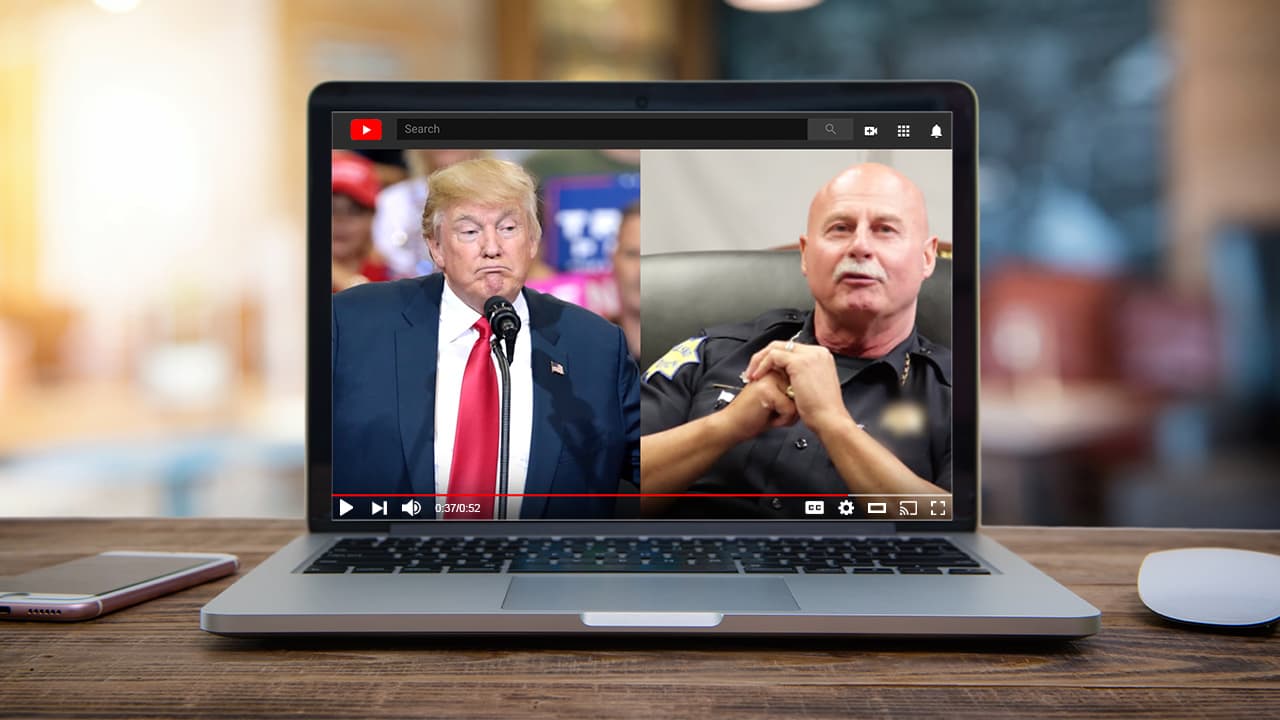 An independent expenditure committee formed to defeat Jerry Dyer in his bid for Fresno mayor has launched its first digital ad.

Listen to this article:
The video links Dyer to President Donald Trump and questions his command of the Fresno Police Department.
The former Fresno police chief calls the ad “nothing but a cheap political ploy cooked up by pollsters for radicals and extremists to sell.”

The video was produced on behalf of the Rising Together, No on Dyer for Mayor 2020 committee. According to the group’s website, more ads are in the works.
The committee received nearly $100,000 in donations two weeks ago from prominent Fresno residents Juan and Amy Arambula, the parents of Assemblyman Joaquin Arambula.
Independent expenditure committees are forbidden by law from coordinating with candidates.

There are various versions of the video — one with a male narrator, one with a female voice and one in Spanish. All tie Dyer to Trump.
“Fresno Police Chief Jerry Dyer has a close friend in Washington. Can you guess who it is?” the narrator says. “They both detain immigrants. They share the same campaign donors. And, they both defend police misconduct. No matter what.”
The ad depicts an image of disgraced deputy chief Keith Foster, and video of high-profile allegations of Fresno police misconduct, including the 2017 shooting death of Isiah Murrietta-Golding.

The video also features Trump, during his May 2016 Fresno campaign stop, name-dropping Dyer.
A “Vote No on Dyer” message appears at the conclusion, with a notice that no candidate authorized the ad.
“Birds of a feather tend to stick together,” Juan Arambula said of the Dyer-Trump comparison.
“Both of them found Christianity rather late in life after having led a lusty younger life. Both of them share similar views on law and order, and apparently believe that law enforcement was better in the good old days, with one exception: when it applies of themselves,” Arambula said.

The release coincides with a new website and social media posts for the anti-Dyer group.
“As many of you may have heard, I am part of a small group of dedicated activists and community members working to make sure Jerry Dyer DOES NOT become our Mayor,” stated an email from the Arambulas to supporters.
Juan Arambula, a former assemblyman known for his congenial nature, told GV Wire previously that part of the motivation against Dyer involves his son Joaquin, a Fresno Democrat.
After Joaquin Arambula’s arrest on suspicion of child abuse last year, Dyer went on TV to say that the injury to the child was not on the buttocks, but elsewhere.
A jury found Arambula not guilty of willful cruelty to a child last May.

Dyer dismissed the ad, saying “the people of Fresno won’t buy it.”
“After serving for the last 40 years as a police officer and the last 18 years as Police Chief, the people of Fresno know who I am,” Dyer told GV Wire via email. “I have worked with Democrats, Republicans and independents to advance our city and keep it safe.  This ad is nothing but a cheap political ploy cooked up by pollsters for radicals and extremists to sell.  This is the same political playbook they use against anyone who doesn’t promote their divisive agenda. The people of Fresno won’t buy it.”
Juan Arambula countered that the ad accurately reflected Dyer.
“I don’t view it as negative. I’m sorry that Jerry does. If you can’t stand the heat, stay out of the kitchen,” Arambula said.
The Dyer campaign is airing radio ads, as well as campaigning via billboards.
Though it is expected that an IE promoting Dyer’s candidacy will be formed, no other groups have filed paperwork.
The other main candidate in the race, Fresno County prosecutor Andrew Janz, did not reply to GV Wire’s request for comment.

Poll: Americans Grateful at Holidays, and a Bit Stressed